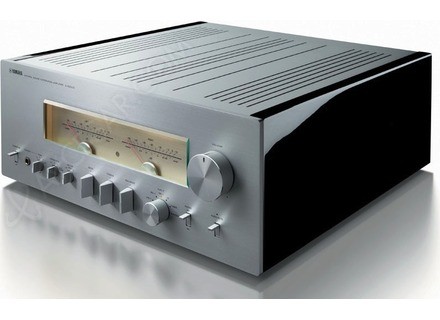 Yamaha A-S3000
5
Here is a less serious and complete the tests that I normally post on the internet test.

-Because it is currently impossible to approach so this is a monstrous lucky shot, and that's exactly what happened to me. But my time was VERY limited!

I was based in AVF Préverenges to try the audio PSI. I made my full test, and just before leaving, while I was talking to the boss, we have come to discuss the internet buzz around the new Yamaha A-S3000. This is where the eye of the boss has informed me and he goes, "but we have three here, you want to quickly check it out?"

We therefore used the time available before the arrival of the next customer to listen to this integrated. He was already underway for some time before my arrival (the boss had come there to listen to his music while I was doing my test).

We had a computer as a source, which sent its signal through a DAC that I could not recognize, all falling within the amp. The amp came out on pregnant at Eventus Audio (IO model F if I remember correctly).

The album was Prince, not being a princien 100%, I could not recognize the song in question.

One of the best amps that I have ever see in my dog's life. The amp plays the nostalgia card with two large VU meters illuminated by a discreet, warm light and exudes strength. I repeat, visually, it's a complete success!

The test piece was born of a groovy bassline. We heard a lot of information of bass playing. As this is not my album, I can not tell you if we hear anything. But it was powerful, held with the membrane of the amp is meant here, very clearly.

The placement of artists is good, you feel a staging between the front and back of the stage and left right placement, the detachment of the speakers was perfect, the movement of artists and / or effects of pan was fully localizable . Lots of details on the entire sound spectrum. A well refined medium that allows the feeling of voice go well and treble rights, without artifice.

We pulled the gear to large volumes and held good, without twisting or bending in from. Although this is not the goal, but we had a great sound powerful, controlled and punchy at the end of the test.

That's what I noticed.

As stated, this is not a REAL big test for me, but I know that many wanted to have information about this machine. You're served.

The question I've read in many places ... is it worth the price?
No amp in the high-end is not, it is always put on. But the stereo is inconsistent passion, and he does not settle with the prevailing price, it even made the feat of playing in the major current integrated short while serving as first prize in this category (accuphase, coda audia , luxman and other McIntosh should thoroughly gaffer, although each brand has a little style to give sound, yamaha plays in this short. I found very close accuphase integrated with a little more clarity. TBC in other tests).