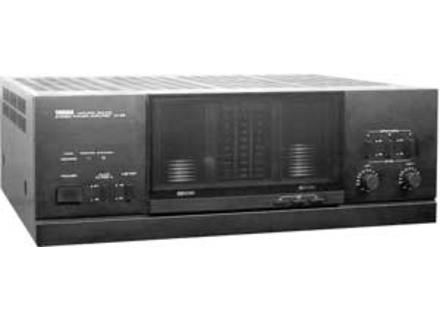 Eloïse-MBo's review (This content has been automatically translated from French)" Sound "natural", a legend, but also a reference in the literature"

Yamaha M-65
I have since October 2014, the first purchased at a famous Parisian (Suresnes) studio.

I tried about twenty and I just decide for this family. I did not know this family and came across it by chance in reference after buying a Kenwood M-2 I have to fix it.
Amplification using the sort I bought two M-70 and M-65. We can find a reasonable price especially for the power that it can deliver more than 200 watts per channel! In practice, I never reached the watt, so it works in class A.
I just got this M-65 tweeter and he will attack my work in class A (choice possible via front panel button. Handy in winter, it heats up The former owner even had to put enormous feet for ventilation.
A shame, the on / off button is different from M-70 and VU meter window ditto. Basically the same line and the look of this era in many manufacturers.

I am amazed! It has more clarity and detail than my Marantz 1152, 4400 or other Harman Kardon Citation 24. It is very nice, matter of taste, with red seen meters. Especially when we superimposed 3. It differentiates the M-70 because no double series of potentiometers to adjust separately level. the number of sets of speakers 3 passes with alternative A, BC, B & C A series // or not. Fans can check THD figures and other TIM it's all good! (At this low level it is no longer THE difference)
The construction is a little less careful than the M-70 but still robust; this is the beginning of the decline of public quality products at affordable prices. In particular the 12 terminals are broken, crushed because the position used to carry 20 kg of these amps on the side (front or terminals at the rear).
.
One copy arrived with 4 lamps pétées, found on Ebay. He needed a clean CI which caused a delay in the extinction of the HP protection. Nothing too serious for electronics with patterns found HiFiengine but probably the reason for the sale of the second by an unscrupulous owner (yes it was not given in the announcement).
I was talking in reference literature, two paragraphs are devoted to "Audio Power Amplifier Design Handbook" by Douglas Self (ASIN: B009W3W2V6). The cost of this architecture using many transistors probably hasten the abandonment of the very good solution! It also uses the technology ZDR (different from a reaction against classical)

I just do it again and again this choice (3 amps in a month and the Bay LBC) I will shortly pictures of animals.
I fell in love (a little reverb for the 4th?) I thought that Yam was not good in Stereo. (Only good motorcycle, my XT350

Yamaha M-65 manuals and other files