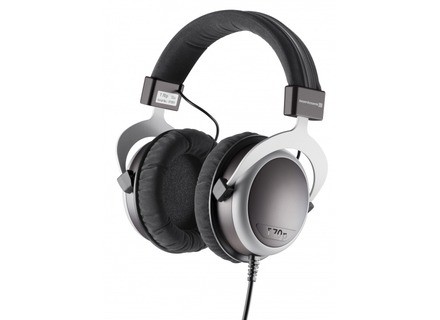 Pete_shifter's review (This content has been automatically translated from French)" Good stuff!"

Beyerdynamic T70 P
Bought at € 339 Cobra in March 2014 (it took 30 € 6 months: - /)
At this price level, it becomes quite demanding, although rather high-end starts twice. Yet even in these areas, no headphone is perfect.

A less than 400 €, I do not see him much competition. AKG are certainly softer but the bass is too far back.

If you are reading this is that you are looking for a mix of audiophile headphones instead. Just as one would not blindly trust a single pair of monitors, you can not settle for one headphone, as it is expensive.

I used alternately with Sony MDR-7506, Sennheiser HD565 Ovation and an Audio-Technica ATH-M50X.
When "shoes" Beyer after Sony, one wonders why it is so loud.
After Sennheiser treble spicy but found the bass.
After the Audio-Technica, one has the impression of not wearing a headphone so there is air. And found the medium / medium high too obscured by exaggerated bass of TA.

In short, it is always a pleasure to return the Beyer on the head!

Headphones used to control my mixes and my premasters.
I do not use it to listen to music for fun. I prefer it more flattering for headphones.
That said, I listened to a little of everything and he is doing well.

Comfort blameless. But it's very subjective - like everyone else besides

It does not leave the studio so I can not really say if it is robust. At the same time, rarely this kind of headphone is used to take the subway ... In any case, there are no signs of any weakness. Remains to be seen if the foam hold up.

The cable is fixed. Too bad.

Well, it's not the ideal headset for listening "relaxation". He is analytical, it is nothing to say! Nothing escapes him.
Unlike the 7506, too analytical, it was not the exaggerated bass and potentially masking.
The lower spectrum is impeccable. The upper midrange is a bit forward. We are used to Beyer.

Spatialization is huge! It almost sounds like an open headphone. No effect "cardboard box" found too often on closed headphones.

In terms of isolation, it is average. This is not a criterion for headphones mix. I rarely heard a very nice headphone insulating be listening.
Did you find this review helpful?yesno
»

Beyerdynamic T70 P
3
I could listen to headphones and compare it to what I already have. If the definition is good bass to treble and stereo, the sound balance is much less. Everything is well balanced with the exception of mid-highs are very prominent, they bring a large measure of hardness on a heavy piano or trumpet (on the Donald Byrd). This headset can, however, provide a good balance to a system with just a lack of balance. Royal comfort is as usual at Beyer. A € 435 we deserved a better sound I think, 6/10 no more!