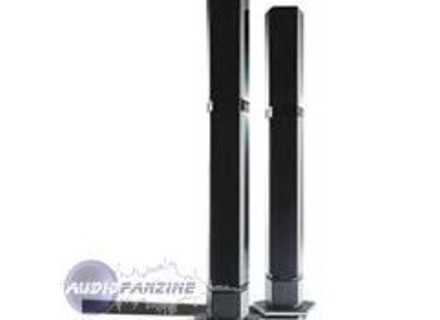 Electrostatique's review (This content has been automatically translated from French)

Bang & Olufsen BeoLab Penta
4
Hello All,
I take this space to react to what is written about this place. We are in 1986, the sound has changed much with the larriv able to have a laser lev in the bass frequencies compared artificial correction our pre-amps old RIAA. Assemblers novopan who loved the spectacular
of large diameters (with a small magnet that the customer does not see!) view l an opportunit to renew their range .L'effet piston serious HP amlior and diameters can be more small. All manufacturers will make this choice and 38 disappear from our living rooms. At B & O aussi.La Penta sees the day.The first model has no amp and not the new HP Russianness attendue.Les ask current customers connected to sexprimer.Les pregnant too low amps, even at B & O (The receiver of 9000/8500/9500 bocenter STK 4151 is a hybrid that's 2x 2x 30w and not 80 as seen written anywhere). The result is mout without prcision.Souvenons us in 1986, our amps gave between 25 and 80 watts, rarely above. Manufacturer srieux some have understood as Cabasse, and begin marketing their own amplifiers (100W for Galiotte by exp) to address this weakness and to ensure their customers power and quality that matches the speaker system .dropoff window
Bang and Olufsen insert in the Penta amp 150W food by a large transformer, (often larger than your system!). Cables of the problems we saffranchit the same time HP since here the length is 60cm.Lenceinte connects an output low dun pr-amp. (Or the wrong choice of speaker outputs / headphones)
The result is. Was pregnant with extraordinary aesthetic, a tense RESPONSE curve, which is not a mdium loud, sharp ends, a sound that is not tiring and a major power allows for low volume listening while having a wide sound level, but also to share records with the neighbors!
The bass is maitriss, they do not run, even if FURTHER specialists do better in the lower registre.La connection of Penta III allows for versatile use.
I am surprised ngatives reviews I can read right or left, often lemporte pieces, sometimes made by people who make the difference between a laser dcodage 14, 16 or 24 bits with amp is a mess tins qutres in! Except that he was there several sries, and good and bad?
I havent any interest with the brand, which, moreover, like all known manufacturers of furnaces.
After, if a pregnant dmonte to see what it has in hoses, we will find a set architectur around two concepts: the sound and clean lesthtique the marque.La column made dune rsine mold and the pentagon shape limits vibrations.Principe resumed by other fabricants.On understand that the most expensive achievements sophisticated score that novopan that al that is not a design load of HP, manufacturing technique, unwanted by good manufacturers but also by all the bad
We also find a complex filter because we do a 4-way system (not 3 as seen written anywhere!). 4 HP mdium are filtrs pairs and mountains are not on the same plane in speaker system, probably to an acoustic phase matching.
Obviously we may well not like the sound, but the product development philosophy from dune, dun rating chre concept and can not be RALIS by manufacturers seeking a supposedly perfection or profit immdiat of a product that never sintgrera you and you probably replaced at least three times in the last twenty years because of their poor quality s.
Did you find this review helpful?yesno
»

Bang & Olufsen BeoLab Penta
4
Hello everyone,
I take this space to respond to what is written about this place. We are in 1986, the sound has changed dramatically with the arrival of laser capable of having a higher performance at lower frequencies compared to our old artificial correction RIAA preamps.
Assemblers Novopan who loved the spectacular large diameters (with a little magnet that the customer does not see!) See this as an opportunity to renew their range.
The piston effect of improved woofer and diameters can be smaller. All manufacturers will make that choice and 38 disappear from our living rooms.
At B & O Penta aussi.La sees the day.The first model has no amp and it is not successful attendue.Les new HP require current to express themselves. Customers connect the speakers to the amp too low, even in B & O (The receiver of BEOCENTER 9000/8500/9500 STK 4151 is a hybrid that gives 2x 2x 30w, not 80 as we see written everywhere). The result is wort, unspecified.
Let us remember that in 1986, the majority of our amps gave between 30 and 80 watts, rarely above. Some reputable manufacturers have understood as Cabasse, and begin to market their own amp (100W for Galiotte by exp) to correct this weakness and provide their customers with a power and quality that corresponds to the speaker.
Bang and Olufsen Penta insert in a 150W amp powered by a large transformer (often larger than your system!). Is overcome at the same time problems here since HP length is 60cm.L speaker cables are connected to a low level output of a preamp. (Or the wrong choice of HP / headphone outputs)
The result is there. There is a cabinet providing unusual aesthetic, a RF response curve, a medium that is not screaming, for treble sound which is not tiring and significant power which allows listening to low volume while having a wide but also to share our records with neighboring sound plan!
Serious are mastered, they do not roll, even if other specialists do better in the lower connector of the registre.La Penta III allows for versatile use.
I am surprised at the negative reviews that I read to the right or left, often outweighs parts, sometimes made by people who are in the ear the difference between a laser decoding 14, 16 or 24 bits with an amp is the Bowls in four! Unless there have been several series, and good and bad?
I have no interest in the brand, which also, like all known manufacturers of furnaces.
After that, if a pregnant apart to see what she has in hoses, we will find a built around two concepts together: the sound and aesthetics on the marque.La column is made of a molded resin the pentagon shape reduces vibrations.Principe resumed by other manufacturers.
We are faced with an industrial product specifications précis.On understand that this sophisticated realization is more expensive than stuck Novopan which corresponds to a load calculation of HP manufacturing technique used by manufacturers but also good for all the wrong ...

We also find a filter on complex PCBs because we are dealing with a 4-way system (not 3 as seen written all over!). Manufacturers prefer small amounts assembly "in the air" but the distribution of Penta was not confidential despite prix.Les 4 midrange are filtered pairs and are not mounted on the same level in the enclosure, probably an agreement acoustic phase.
It is obviously not like the sound, but the product development from a philosophy, a concept is expensive and can only be achieved by manufacturers seeking a so-called perfection or the immediate benefit of a product never will fit in your home and you probably changed at least three times in the last twenty years because of their bad qualities.

flyingfish31's review (This content has been automatically translated from French)

Bang & Olufsen BeoLab Penta
5
-It's been a year that I have!
-The "+": They are beautiful, warm sound and very powerful! The "-" Do not touch with fingers otherwise difficult to trace from (only Polish!)
-Being responsible for an SAV (the brand!) I got bcp hands, even the most powerful, but I did not feel the same emotions with them there!
"It is true what are very expensive to buy (+ 30,000 francs for the pair at the time, is currently negotiating env.10.000 francs a pair, according to the state and the series of course!), But hey, you have the B & O. ..!!!!!!![ img]
Did you find this review helpful?yesno
»

boule90's review (This content has been automatically translated from French)

Bang & Olufsen BeoLab Penta
5
My parents are these speakers for about fifteen years now, and the sound is still as lightning! they are composed of 9 HP! The bass is returned with a large fidélitée and depth, thanks to the number of serious HP and the rest of frequencies is equally well made.
They feature many more settings, and have a good style. While they are expensive, but they are objects of prestige. B & O requires ...
Did you find this review helpful?yesno
»
Read the 5 user reviews on the Bang & Olufsen BeoLab Penta »