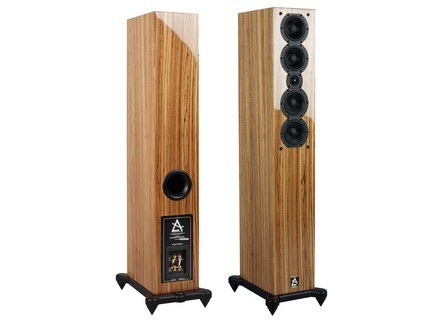 Tried in combination with these elements (see the complete text link below):
https://fr.audiofanzine.com/ampli-hifi/leema-acoustics/tucana-ii/avis/r.103787.html

The Xeta gave a better result. Being re-appear bassist, far away, and simply giving more information than the Audium Comp8, tested in parallel. Listening reminded me very much that of the BW 804 Diamond. But if I stay in comparison with the Audium, the Xeta offered me a comparable spacialisation rather loose without achieving the kind of references, but the sound left much hp and the artists took their places easily from right to left. Rather deep, we feel the dimensions of parts used during the recording of a particular artist, without reaching, again, the very last corner. I could hardly imagine that small HP (which are really very small) can create a basic sound powerful enough to look credible. Yet from the start of material a bit hot for such rises, XETA has had no trouble recreating the battery of a Led Zeppelin album. Tom up, it was shouting truth, a little less below, preventing the latter bit of realism. But this budget is truly admirable. The treble was slightly sweetened on the tip, and I had strong pain whether it was more electronics, or the HP tweeter that were involved. He also renounced send the latest bit of detail that would have made the cymbal definitely alive, but in the brain adapts rather well and, somehow, believe in it.

More emphasis unit that the micro-distribution of interpreters, it was a good listener, and to pay Sfr 4'480 or 3'729 euros during the day, not too dearly sought. This is a very good listener, which, as in course above, approaching in many respects that of the B & W 804 which is around 7,000 euros (but hey, since when the B & W make some gear that has a good report quality / price, I ask you?). Alas, as with the B & W, the choice of finish remains very limited. Black, white and a veneer completely unrealistic for a modern interior, though very pretty. Pfff ... you really have that manufacturers review their standards for plating. Those of birch, alder or birch thank the home, and they should not be low. This influenced the rating by one point.

I am not amused to test the specific investment. According to the importer, it easily tolerates small rooms, medium and large. I noticed a good performance at low volume, allowing an intimate listening if necessary. I have not tried the very high volumes with it.

So I gave it a good final grade. In this budget, it is clearly hard to beat. But there are also good.
Did you find this review helpful?yesno
»