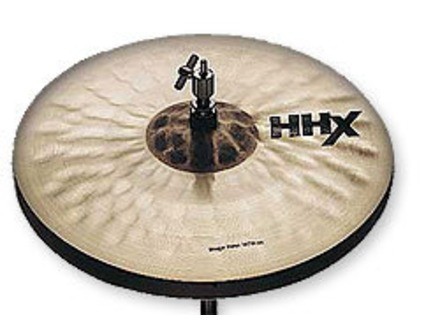 HHX Stage Hats 14", Hi-Hat from Sabian in the HHX series.

Sabian HHX Stage Hats 14"
4
I'm used to the HHX series, while the acquisition of Charley was a logical route. For 6 months now, I use it because of repeated weekly.
Its powerful and rough appearance. It fits perfectly for rock. I am satisfied. Now the price seems too high to me, even though I know it is the high-end from the manufacturer.
Did you find this review helpful?yesno
»

Glints collide's review (This content has been automatically translated from French)

I use it for 7 days.
It is absolutely gnial! Probably the best I've ever charley test (though I have tried tons).
Before this I had a AAX Metal Hats, too bright for me, too intrusive, too.
The HHX is trs medium, never aggressive in the treble, and it does not produce low buzzing like some bright hi-hats (which must be cut to the mix). Groove it alone. It has the particularity of great blend into the music because it possde sound pretty sweet, it is not fMeasure and place in a great mix. The openings are a charley rgal has makes you want to play more funky. A must for the studio.
I put 10/10 because I can not get more, but believe me it's really an instrument part.
I play in a death metal band and a group of songs at the moment, it is superb in the two configurations. Ms. jou open it is great!
A good static top with a little low cut and de-esser shot, mmmmhhh ... !
In France it is expensive (500 euro in some stores!) But I could have had 340 euros with US nine. At that price I do not hsit second. I do it again this election if c'tait again, obviously. I have also a splash of 10 'HHX which is also excellent.
I also test the HHX Manhattan hats in 13 ', trs is good, even prcis, the HHX Groove hats, I like less because a little dirty this APRS I have cost. I have not tried the Rock.
Simply gnial! Sabian thank you.
Did you find this review helpful?yesno
»