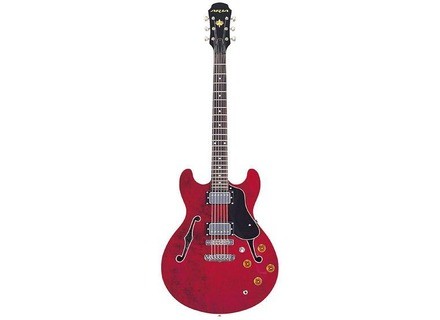 Aria TA-40
4
- Asian guitar manufactured by ARIA
- Two pickups sold as humbuckers, when they aren't. They are actually two big single-coils, the neck pickup has a round and warm sound, suitable for blues and solos. The bridge pickup is pretty noisy, I replaced it with a Gibson PAF, which sounds much better.
- The stop-bar tailpiece and tune-O-matic bridge are OK, but you need to file the saddles a bit.
- Very thin neck, which you either like or not.
- Volume and tone controls for each pickup, 3-way selector
- The guitar is not a copy of a 335 but rather a real hollowbody, it doesn't have a center bracing where the pickups rest.

Neck: Pleasant, but very thin, not the best for people who like bends nor for lumberjacks
- Access to the upper frets is good enough for what this guitar is for
- Good design, but you'll have to put a strap lock on the neck heel.
- There's no need to fiddle much with the knobs, just plug it and play.

- It's fine for blues/rock. With chorus, the sound of the neck pickup and the sustain are very nice.
- Playing rhythm guitar, the new bridge pickup is very biting and pleasant.
- The distortion is a bit special, given the sustain of the instrument
- I plug it into a Fender blues deville 4x10 and it sounds great for rock, which means it's not an instrument to play rhythm guitar. But I get a Stones sound pretty easily.
- I use 11/52 strings with a standard tuning for more punch.

It's a good value for money. Having tested more expensive guitars (ES335 Gibson and a copy by Tokai), it's pretty impressive.
The risk is the unevenness of the brand. I have seen some guitars whose neck was twisted. The electronics of mine (the pots) came off and the tuners are starting to die on me (after 10years).
Did you find this review helpful?yesno
»

Very nice neck, good access to the upper frets, very good design, and light.
It's very easy to get the sound you want!

Ideal for rock blues, the pickups are precise and warm.
I play with a peavey amp and a V-amp pro.
The clean sounds are very round and the distortions sounds have a lots of lows and mids.

I'm really impressed by this guitar. Thin and pleasant neck, very well-balanced instrument and its sound matches perfectly its look!
I have several good quality guitars and this is my favorite (considering the price). However, it is true that the tuners age pretty badly.
Did you find this review helpful?yesno
»

Aria TA-40
5
Japanese-made, hollowbody without the neck-through body that was characteristic of all Aria Pro II guitars. Bolt-on neck, no vibrato. It's hard to consider one without messing everything up, IMHO.
Two humbuckers, volume and tone knobs. 3-way toggle switch: 1, 2 and 1+2
22-fret neck, some frets aren't flush and mus be filed on the bottom part of the neck. Sometimes the high E string gets stuck after a bend downwards. Some other times they grates my fingers. I should've done it already but I can't be bothered to do it and I have other guitars that also sound fine.
Mine is brown, with a more natural color, even if I'm not really sure that it's the real color of the wood itself.

The form of the neck is very pleasant, except for the tiny finish details, but don't forget it's an entry-level guitar.
The weight is balanced, no problems in this regard. On the other hand, you have to fix the strap to the headstock or you'll have to mount a strap lock yourself.
Easy access to the upper frets, up to the 19th fret, thanks to the neck and the thin hollowbody design, too.
After the guitar got wet in my cellar, the neck isn't perfectly straight anymore, even after three attempts to fix it at the guitar shop. So I tune it for it to be right up to the 5th fret, a compromise that makes everything unpredictable. But anyway, blues isn't Beethoven.

I must admit that I thought it would die after the flood in my cellar. I cleaned it up well, applied a bit of silicone lub and the pots recovered their health, the electronics survived, and the sound is the same as before.
Namely: Blues, blues and blues. Fat, crunch, sweet with the neck pickup and powerful, sharper and more aggressive with the other.
No annoying sounds, you can get harmonics if you look for them and you have new strings. It sounds well with open strings, too. It has a good sustain despite the bolt-on neck.
Amp: It sounds better with the Fender Rumble 100, which has more lows and no overdrive, than with the VOX AD30VT modeling amp. It's great for jazz, as well.

I've had it for a long time and I take it up from time to time when I get bored of my other guitars.
I didn't try many others before buying it, it flirted with me in the store.
It's robust (do you know many electric guitars that can be 10 days underwater and can still be played afterwards?), with a nice sound, it's easy to play and to get nice sounds out of it (anything you play sounds good).
The only flaw: The finish and the frets that had to be filed.
Another drawback is that I want to change the pickups, but a good pickup would cost me today more than the guitar itself!!
Did you find this review helpful?yesno
»

very pleasant to play, it must be precise because you can hear everything! the handle is "standard" sitting and standing without problem and even that is very light

rather for rock blues and jazz, the sound is round, the neck pickup is very hot,
I find interresting not very acute, a little small but nice to mix with the handle ... the electronic origin is well below the quality of the violin,

I use it for 3 years, I have numerous guitar that is a favorite, would change the electronics for the best of the best, however the original ca passe partout, as the distortion, and for the price using the Cygnus is often an alternative to his modest and for the collector.