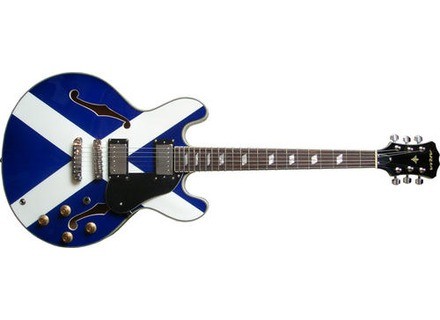 The first thing you notice about this guitar is that it throws a LOT! The decor "Saltire" (Cross of St. Andrew ... what the Scottish flag) is beautiful and the back of a brilliant and immaculate white is very classy, ​​especially with cream binding, which introduces a slight contrast of tastes better on contours of the neck, body and even the gills.

And then you look at the back of the head, we see the tiny sticker "Made in China" and then we start to worry ... For if the recent Chinese production has reached a very honorable (see the last series of Squier), a few years ago it was a different story. And indeed if we look closer we see that the finishes are a bit lacking: bindings slightly irregular in places, pickguard cut with a chainsaw, fitting paint really limit on the body-neck junction ... But hey, on the one hand these problems are of a solely aesthetic, and the other must still really stick it to the nose realize. This is a semi-hollowbody to 500 euros, do not expect the quality of finish of a Gibson ES-335-2500, and after all it still remains higher than the Epiphone Dot I tried it recently, especially in terms of what is most important: the violin.

Because yes, the violin is rather exciting. The wood used conform to the original with Gibson unlike most copies in this price range (including the Epiphone). The guitar is pretty heavy for a semi-hollowbody, which tends to inspire me with confidence, I may be wrong but it seems that the central beam is wider than average, which could explain the weight.

As usual on this type of guitar attachment strap side handle on the back of the guitar near the heel. Despite this beast has a slight tendency to pitch down.

The handle is very "Gibson", wide and high radius (ie touch rather flat) as on my Les Paul, but considerably thicker, I think this is a profile "U-shape" as the first 335. Quite frankly the handle is not quite to my taste, I like how the sleeves mastocs baseball bat but I prefer a touch more associated with bulging ... It is a matter of personal preference, however one thing is certain: this "fat neck" is done either for or shredders for small hands. Most importantly, the angle of the handle from the body is absolutely perfect and lowers the action as possible without the cords curl at all. As a play becomes a real pleasure, even with this type of strings and handle deep draft.

The tuners are generic cheap Asian oil bath, they keep well agreement but lack a little precision for my taste.

Note that the QH tailpiece is a stopbar sort of perfected that can either pass the strings through the back of the room as the standard models, either by inserting the top for quick access in case of change. I have tried the second option and so far I have not had to complain, in fact I doubt that one or the other way does not change anything to the sound.

Unplugged, this guitar sounds very promising. We note first sustain its exceptional (perhaps a beneficial effect of the central beam supposedly oversized easel or more massive than a Tune-O-Matic standard?) The sound is open, punchy, resonant, expressive , with an attack this well; Palm Mute have a lot of punch. The guitar sounds a bit nasal, which is characteristic of the particular resonance in the media-induced body reduces the volume of semi-hollowbodies (and does not appear to amplification), but the bass and treble are well balanced .

I was a big disappointment by plugging ... The sound was completely overwhelmed by the bass with no definition. The problem was not at all microphones set of origin (in this context is a setting that is too often ignored in my opinion). Few shots on screwdriver studs humbuckers have sufficed to find the guitar sound good tonal balance. The neck pickup sounds good without being greasy and hot bridge pickup provides high mids or crystalline air, the two not having an excessive level of output humbuckers, but well transcribing all the punch attacks. On my Marshall Valvestate 8240 (hybrid) it is rock, on my Fender 75 (all lamps 80s) is very "jangly" and flattering, something to take to the Smiths. Nevertheless it remains in the amplified sound an indescribable something which does not satisfy me fully ... A lack of depth maybe? After all the pickups are Duncan Designed that is not top notch. So I think eventually replace them, I would see the Fender Wide Range instead ...

One last point: given the amount of chips that sprang paraffin blocks humbuckers each quarter turn of the screw, I can say without doubt that they are properly "wax potted" ... This is not the luxury of a semi-hollowbody!

I have four other guitars quite different, it&#39;s been that I wanted a semi-hollow not too expensive but I was afraid she doublonne with my Les Paul. I tried a few Epiphone that I was not really convinced. I bought the TA-50 on a misunderstanding (I thought they were still made in Japan or at least in Korea ... ha!) And also a bit because I was not its decor mistyped in the eye ... Vanitas vanitatum! In the end I do not regret my purchase, finishes a bit risky not detract from the quality of violin, guitar and this requires only a pair of microphones to become exceptionally good (as my Japanese Jaguar finally!) If the price it cost me (500 euros) may seem high for a guitar made in China, it is quite justified in terms of quality. This guitar is a rare (limited series production anymore) but this view remains valid for the TA-50 "ordinary" recent.