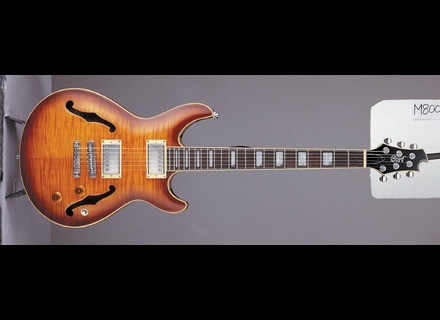 math112x's review (This content has been automatically translated from French)

Handle very nice! thick perfect for rhythm and solos also pass without problem!
access to acute asser easy but is better
very well balanced on top it yours balanced on my leg!
weight relatively faiblre saw the body creu
Bond's arrivbe easily!
super like this already but just add good mics any good and the Les Pauls do not envy!

Well it sounds funk blues rock with micro and split the bridge pickup was a nice little hard rock metal!
I play with an all-tube amp and frankly nothing was wrong!
asser his hot jazz to rock we know all this faiore ave even scratching the tele!
c the incredible Polivalente of this instrument
I love the sound bnlues rock and I am filled

I use it for 8 months
I love this guitar to any standard
yes I try to bcp the same model Les Pauls but the weight I was also pushed back its cde and this one is a gem
10/10 for quality awards as RAPORT tjr in cort
yes I would do this choice! very good guitar

brutus01's review (This content has been automatically translated from French)

The handle is nice.
Large as a Les Paul but thinner.
Access to acute super.Bonne ergonomics with a weight of the hollow body resonance.
The humbuckers MightyMite can get a nice sound without being up to the Seymour Duncan or Gibson P90.
The split of microphones does not sound better.

I'm used to playing on U.S. production guitars (PRS and Stratocaster) but I must admit that this CORT M-800 blew me away because it is rather nice bill, well finished (Asians get used to begin with) .
I play Peavey Classic 50 All Tube and Vintager BEHRINGER AC 112 with tube preamp and it does well.
Clearly the sounds are pretty slammin but saturated, the microphones are a bit of potato.
That said, they are not ridiculous either.
Connected to the pedals (PROCO RAT 2, DIGITECH Delay, Flanger and ZOOM G2), it has a good record in different styles of music (rock, blues and pop).

I've had a semaine.J 'loves are look (style PRS), it is easy to play standing or sitting because it is well balanced.
When we look more closely at the collection CORT, we see that apart from the series Masterpieces, an inexpensive (€ 1300 to nearly € 2,000), the rest is displayed with a value / price ratio, given the quality finish, microphones available (EMG, Seymour Duncan) and this in all styles of yesterday and today.
Certainly, it is not comparable to PRS GIBSON FENDER and other, but for the musician who does not have deep pockets is great. (Plan may be changing pickups?)
I think I do it again but this choice today, ie as a second or trosième scratches.

Edit of 15/02/2007: I changed the MightyMite for a Seymour Duncan SH-4 Jeff Beck in bridge and a SH-6 Duncan Distortion in the neck. (130 € for two)
The sound is métamorphosé.Ces microphones have a hell of potato and confirm that this small CORT mounted on MS 800, it takes to have a scratch that sounds good, thanks in others, a good violin.