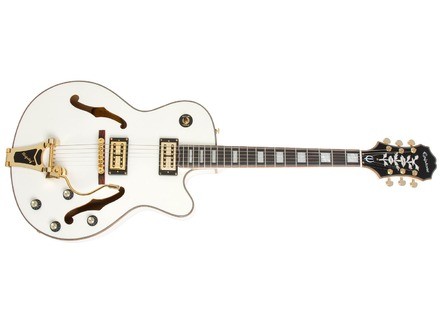 julio27's review (This content has been automatically translated from French)" versatility and class ...."

Epiphone Emperor Swingster Royale
4
Made in Corea, purchased from dv ...
The App features of the beast being diponible the Epiphone website .... go visit them ...
The precision is the only binding orange sequin (bling bling but match the finish of the guitar) occult pins slice of key .... so not easy to live in a condition you have to play .... with his ears and not with his eyes ....
(I like ellipses ...)

The handle is comfortable, and even if access to the treble and not at the top of the top used to it quickly and after a few adjustments and figures of speech is not playing nice ... leads attention to 20 cases of sudden it just miss the crazy shred!
The configuration with the push pull gives a wide range of sound and usable in all positions ... it's rare!
sound tends to be "blackened playing with volumes ... shame but I rviendrais ....
Only negatives are large (on mine) the vibration of the wheel in the bridge .... it was out of the box closest to the pan as the guitar ... so I had to "calibrate" the wheels with PTFE plumbing ... it's long and tedious, but suddenly it no longer vibrates and sustain (sound in general for that matter) is greatly improved ....
The neck pickup is not axactement adjust the spacing of the low E string .... is qq millimeter shift and suddenly the game ... AZT adapt to change .... but good the price you can not get the tv jones original ....
Once the strings change for dr dimebag signature 09-50 is awfully fun to play as well as acoustic connected.
It's very nice to play at home without plug and enjoy his guitar and vibrato sound and connect to repet, and thus keep the gambling!

As I said push pull give a wide variety of semi-acoustic sounds to a traditional sound.
I play mostly rock tends to be spot .... "pop" a little more hardcore ...
And she leaves all situtations ... the bass is generous but the sound is sharp and piercing mix well
Ashdown fallen angel with a Peavy Bandit 112 (it happens) and a tiny terror is very rock n roll!.
Goes well with Paradrive and musket fuzz
Distos stand perfectly .... really good ... the sound of slash is at your fingertips ... ac dc carefree and with a fuzz of insanity is fat but incisive.
The clean are not left with a lot of reserve to the dynamic level
more feedback that with a solidbody but not unmanageable either and I do not skimp by on winning!

In short this is vintage in spirit but very compatible with a modern game and fireworks!

The Bigsby is very nice and responsive thanks to the tandem wheels / pine bridge is very stable ... and I also believe evil pal .....

My favorite is the config ... Swingster to a snarling dog wah super bawl in the Paradive and the tiny terror of madness ....!
(4 channels and a wah ..... what you ask for ... an effects loop .... never happy the people!)

I then used two short months ... it's short you tell me ... but certainly since I well exploited ....
A rather trashy punk record (jute the snarling dog and Ashdown (I was not tiny) and a head rush and musket for leads in the second decision)
A friend not believe me when I told him it was hip!
fat incisive mùais .... nasty to possible!
A concert with my other group of pop rockeux alternator depression .... (a very nice heritage Peavy incidentally) with the usual chainge .... for me .... and nothing that compliments on the sound and the mouth!
I remake that choice without hesitation, this is the guitar I needed!
jsute lack a suitable neck pickup and a luthier at the top and it will be a weapon of mass distortion adjustment!