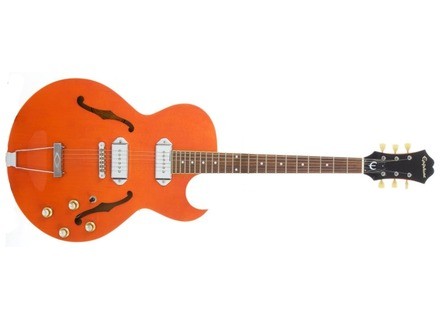 El Tiz's review (This content has been automatically translated from French)

Epiphone Sorrento Reissue
5
My model dates back to 1997 and manufactured as t dsormais all Epiphone Korea. This is a 22 frets, the pickups are Alnicos P-90 (Yes, that sounds serious!). The bridge is a Tune-O-Matic and is equipped with a vibrato Vibrotone (The Epiphone Bigsby, yes !!!). I prcise the MODL with vibrato t has manufactured a year from 1997 in 1998. The selector is a standard 3-position, the control is 2 volumes and 2 tones (also standard). I can prciser the exact type of the handle, but to compare, know that by far the recalled profile 60 ', and ais the late 50' and larger.

As I said above, the handle is actually really enjoyable to play. Access in acute cepandant is more difficult, given the lev plutt pulling the strings (10-46 at least!). But this type of guitar you have to know what you want. Solos for "highways", so you'll pay a strato! With regard to form, it is extraordinary: one feels the presence, width and contour really give the impression of having something consistent in the hands! Yet regarding the weight is a hollow body, so it is really lgre (who like me have used the Les Paul know what it is to bring a guitar!) .
Sound: close your eyes, your you in 1955. So play "Come on Everybody" or take you to Brian Setzer and then run a "Rock this Town", you will see what it is! Thin guys, microphones, it's still the same P-90. Epiphone? Yes, P-90 Epiphone, and know that sound gigantically rock'n'roll. Nothing to do with the pickups hastily auqels Epiphone was a time we used to. No need to change, it is more that the height (and for those who do not know what to say "yes, but it's different", I can only advise to leave their 2 minutes of ct snobbery against the Asian models, and cost a little what this guitar was in the belly ...).

This guitar is first of all the muscles and rock and roll electric blues. Branch of a Marshall all-tube, this guitar scale lightning. Nanmoins, remember that the Sorrento, the original model that existed during the 60s, is the Epiphone plutt The series "Jazz". From this point of view, the clear sound is the height of what we expect from a P-90, prcis and warm. Hollow body configuration of the body adds a plus to me, a depth that can not be suspected when one is accustomed to play on a Solid Body. I advise all the habits of Gibson Les Paul, SG and other large Solid body, you will find a presentation that you probably do not know it! As for fans of heavy metal type Van Halen, or purity soloist type Vai or Satriani, go your way, this is not an Ibanez (nor Jackson nor did ...).

I use this guitar for a short time, but I admit to be fills dj.
What I like most about it is that feeling REALLY "roots" when I handle the vibrato, the hardness of the strings which makes me REALLY attack but that gives me back the power of sound, deep and high time. Otherwise, issue color, orange setting sun is kind of a class really particulire. Just this giant vintage look ...
What I like least? Well ... it's hard as a question! I would say it marks Access in the most acute demand a special effort. Now, we can not have everything! It takes sweat when making music is the foundation of blues, jazz and rock'n'roll (in case some have forgotten ...).
I tried other dj model (other Epiphone or Gretsch), but this is really the one that made me crack. I confess be falling on this guitar by accident, I had absolutely no prvu to buy the one that day! But with the Sorrento, I broke down, you try an instrument for the first time, and suddenly you feel this presentation to know familirement weird, feel like dj jou top thousands of times ... And the price then! I had occasion to 600 euros! New, it does not Exceeds 900. A few prs equivalent model, the Gretsch 3156 Streamliner G rating it prs in 1200 euros! ... So yes, with the experience, I would do this choice, plutt twice that!