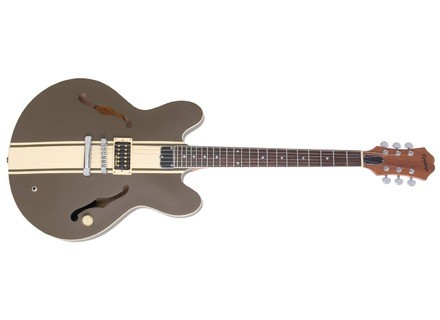 All user reviews for the Epiphone Tom Delonge ES-333

It is really nice to use this guitar, and very simple.Tout beginner could easily get away with. It is even an excellent start to scratch. It is strongly advised.
Light, friendly, Epiphone Tom DeLonge is really great.

It is suitable for many styles, although few versatile. I play without amps or so, very rarely.

I use this guitar for a year and a bit and I'm never tired me. I passed on, there's three months, a friend who wanted to learn and she is doing really well. This guitar, although I repeat, is easy to handle, even a novice could easily play.
I love the color, shape characteristic of ES and beige stripe.

Just like the previous opinion, the ergonomics are extra. Super light, well balanced (no handle falling or cash too heavy ...) investment tips for strap plays. I find the handle very nice, well finished, frets well drawn, access to acute relatively simple, this side, that of happiness. Whether it's a pick or fingers, no problem.

Be it my style of music?

Yes. Already because I listen to Mr. Delonge carefully. And although my music is not modeled on hers, I love the sounds it uses from the last Blink / AvA. Therefore it was altogether his sound.
Overdrive, distortion everything goes ... For all that is crunch / screamo, no problem this is for. I did not even rubbed distos large (I do is, obviously, not), so Cf below!

Regarding the clean ... I find it a bit hard to get a real clean. To pick on an amp with some gain, it quickly go crunchy. It is clear that looking further, we must find a pure clear sound, but it is not as immediate as a simple micro strat, see the db a TV.

So for me it is not so polyalente. But hey, when you buy the guitar Tom Delonge, we know what to expect right?

I use it for a few days, not yet thoroughly explored.

In terms of looks, the body is not painted. And yes, it is a giant sticker. So do not bother strive to apply any kind of polish is clean plastic! Which gives this matte ... Is it really a penalty? At least, goodbye traces of fat!
The input jack in the middle of the case: why?
And after its main drawback is itself! we love, or we do not like! So for me, this is to try before you buy!
Speaking of purchase, the price to my taste is not an exaggeration? .. We will not pay a little signature at the back of the head?

JuSpades's review (This content has been automatically translated from French)" scene for 2 years!"

Epiphone Tom Delonge ES-333
4
Of the 4 guitars I own I have 2 Epi Delonge "modified" which are scenes of my guitars and I love them so much that I will have to make their case here! ^ ^

We are on good violin at this price already Epiphone (we can drop all that is below € 200 / 250, but above it may be worth!). Mahogany neck, maple body and it has followed all the rules of the half-body (even if it's a good joke, we talk about below).

22 frets, micro Gibson Dirty Fingers (that's the good point of signing Delonge, the microphones that come with it ...). It is on a signature, a knob for volume as tona single setting. It will be good enough anyway see where the microphone is placed in the treble that everything will play.

Like any half-body is relatively light, which is good for the back, but she tends to lean forward (and even that is the case with Gibson!)

Relatively pleasant to grip, it is easily in the last few frets and knobs / swich / mic that can do both buggers that get a ride to disrupt fingers without risking anything.

But the problem remains unchanged since Epiphone X time ... harmonics! Is it because of the famous Gibson tailpiece they insist on putting, I do not know. But let's be a SG, an LP or ES (and I have been in the hands of the Epi!) Is always a couple of false harmonics, and you can take him to adjustments every two months Here we go again the following month!

Unable then to play lap steel (though very good at bootleneck Me), I was disappointed a few times to hear my solos sounded fake because I did not pick up / check before that from the 12th fret there was between 1 and 1 half tone apart!

Anyway the poor girl has nothing to do, the problem Epiphone that!

Tone!
Quite impressive, Dirty Finger, which does not cost so much is really a beautiful beast.

The clean first: This is the nicest surprise of the guitar! Is it because of the choice of microphone placement that sounds so crystalline, so cold? No idea, whatever it is we in no way inferior to Start one on that side. While I had dabbled invalidate or detonator Delonge Start of the time, which at best is a clean crunch what ... this one is really surprising! The bridge pickup placement makes it a perfect mic for all effects (Delay, flanger, overdrive to screaming). By that time fan of Floyd have a blast in clean!

The distortion: If he is not fishing (admitting it, it was too much) invalidate or detonators on Start, it is distortion that it feels! If you just activated a distortion of "basic" above, bah was the sound that Tom has been using since the end of Blink and AVA with distortion: this thing light, sharp and ugly! (Bridge pickup without setting tona ...)
If we tamper with it just happens to catch the sound of American punk rock to metal or very easily. The problem we then discovered: a LARSEN crazy! If we manage well the pedals and we know roughly set his microphone, it can alleviate the problem disappears, however, that unfortunately never ...
The disto alt / prog than punk or metal can be found fairly easily balance. But do not bother looking for the sound of a Knopfler solo or looking for blues overdrive! The screaming overdrive as much as you want without touching imposssible neck pickup blues, jazz ... That's why it's ironic that it is "half a body"! ^ ^ Bah

So for 2 years, these are my guitars lives. (I have a sg 310 and a Peavey Raptor completely redone otherwise).

Yes I had guitars in their hands, and Inga's time I can say that!

What I like least? Nothing except the own choice Delonge! For Gibson / Epiphone guitar is a signature: a knob, a microphone, a sound, you pay a bit special reasons and screen printing the signature on the back, they are for anything else!

I would do if this election? Of course! Me they fit me very well and I'm not ready to let go!