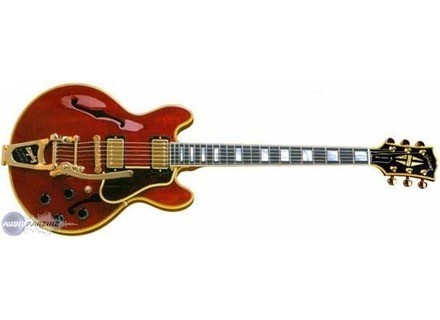 All user reviews for the Gibson CS-356

Average Score:4.7( 4.7/5 based on 3 reviews )
Buy this productView price information >
Not satisfied with those reviews?
Our members also liked:
Buy at Sweetwater

Gibson CS-356
4
I bought this guitar used in the U.S., but it was totally new. Result: I paid 1,000 euros less than the average price, but watch out for customs fees, huge, when you buy a guitar in the U.S. via Ebay: your bid you have to add between 20 and 30%!
The scam is that you apply this rate even if the guitar is used!
The handle is a modern type of dish. The look is great. It's a small guitar: it is smaller than for example 355 to which it resembles.
9 / 10

The neck is nice and the weight of the guitar is no problem.
Access to acute is correct, but it's not a Start!.
You can see me play with the 356 (and hear) here:

It takes some getting used to the fact that to have a sound not crunchy, although no effects blues or jazz, there must be volumes of tones below 8.
A 9 or 10 and the sound becomes saturated fats, for use aggressive, so.

There is a very good range of sounds, because the difference in personality between the two microphones is very strong. The mixture of the two microphones is also changing, as the assay.
The most beautiful sounds (as often) will be achieved with cords rather hard, and 011 being perfect ... but I know a lot of guitarists do not go beyond 010!

I have had many guitars in my life, and this is the best, though it requires effort to master, including a search long enough on sound.
The fittings are superb, the varnish too.
The overall rating for me is 8.5 / 10

Gibson CS-356
5
Char Guitareshop guitar bought in Bordeaux.
Bigsby vibrato is beautiful and the neck is fine and very nice (different from a Les Paul Classic)
The pickups are classics 57.
Other features are described above

The handle is very nice and very easy to play especially for small hands.
The petty cash is ergonomic

Music style:
Jazz: 10
Rock blues: 10
Funk: 3
Hard Rock: 8 (ACDC going very well)
All this on a AC30. My greatest pleasure is to plug the guitar directly into the amp without effects and played with fingers, it crunch as you want. I never tire of the sound.
As for Rock Setzer style is a wonder especially with the Bigsby.
However, for the Ray Vaughan, because of the pickups, it spends less than a strat

I wanted a Gretsch (too big, not easy to play), and I'm left with the gibson. The sound of this guitar I was immediately bewitched and for two years, I only play with it almost.
Compared to my Stratocaster Clapton (it sounds all over the neck parail and do not go out of tune), the SC 356 is more sensitive to the level of tuning (certainly the Bigsby) and do not sound anywhere consistently.
on the other hand, on the part of the handle that sounds, the sound is simply amazing (I am able to play again for 10 minutes the same notes so the sound is bewitching). This is a guitar with a very strong personality (which is not the case for my Start on the other hand is that it happens everywhere at once).
The price is about 3200 euros in the image of the guitar top.
I do not regret it. I forgot to say she is beautiful flamed red (it's important to have an instrument that is beautiful because we still want to play more). And when you get out of the box, people do not remain unmoved. (See me play on the TDCA, the son of a friend took a snap and started playing guitar in saying I want to do this. Seen as I play, it vraimant SOUND of the Gibson that it gave him the urge !!!). What more could you want

gibs's review (This content has been automatically translated from French)

Model 1 / 4 body style 335, but the size of a stratum.
Table + corp in mass (the body is hollow) and back table as a bomb archtop.
Custom shop finish (gold, Flamm block mother of pearl, lacquer red and translucent vibrato Bigby)
Top quality.

Cot comfort the handle is one of the best, except in the CASC acute because of the shape of the guitar.
It sounds right away. Balance, enjoyable, easy handling, comfortable. Gibson is the radius of the button is trs flat, a little time to adapt is often neccessaire.
High quality finish.

Sound level c is a marvel, clean sounds are worthy of the fourth soft boxes soft warm varied, a good vacuum close to the projection of an acoustic sensations.
The crunch sublime and very good saturation (on Mesa Boogie DC30).
Weakness large saturation, the metal, in equalizer v ect.

C is the guitar style that is possder rve in one day, here is the c rve RALIS.
I use the for almost a year.
Must one day try a guitar of this quality to feel the motion that it DGIG.
Except in the area of ​​saturation, a lot of guitar are far behind in its
natural.
It MRIT its tariff us but not practiced in France!
Maximum quality especially when using the direct in a good amp, r'n'b style jazz blues pop rock.