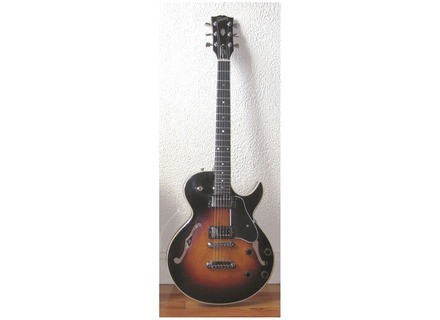 Gibson Howard Roberts Fusion II
Made in USA for this guitar GIBSON, which suits me perfectly. fairly light, without feedback, ebony fingerboard, compact, much less than 335 GIBSON, sustain dream short to play big band with great sound, it's perfect and I find the sound that suits me.

handle very nice nothing to say

jazz sound but not that

I use it for 5 years I tried archtop which were good as well but with the feedback, I had a GIBSON ROBERTS FUSION I sold because of the weight, the beam was mahogany I think, while GIBSON is on the balsa, which plays the same role but lighter in short, a great guitar relatively unknown, but deserves to be addressed.

Shibaya's review (This content has been automatically translated from French)

The handle type 59 is enjoyable and is a trs vritable highway. Flat as we did encounter more. The highs are more accessible than a Les Paul. This guitar, influenced by Howard Roberts, who was particularly guitarist T. Monk, is a fusion as the name suggests, a concept between the ES 175 and the Les Paul. A particular feature is the addition of a central block of balsa wood, al the table and flush the bottom of a few mm, which Gibson calls "Chromyte". This block can effectively rduire feedback gnralement encountered the half-crates ES 335 and ES 175. Could it be because of this that this guitar possde bass so deep? Some say it's an ES175, ES335 and a Les Paul in one and the same instrument.
The fund provides half-fabulous treble and harmonics out of the ordinary. I was at first surprised by the bass: deep is not running (I'm bass player training).

Perfect for blues, jazz. The same rock and hard does not dpal. I do not know a guitar with bass as deep and crystalline highs. Without the plug, it was the sound of a high-end sound, the less power, half-body forces. Playing on the rglages Tone and volume of two microphones and the slecteur, one passes from one of Pat Metheny's jazz or blues riffs Aldi Meola J. Larry Carlton or Lee Hooker, with the crunchy. So much for the possibilities of this guitar (no, no, this is not a ES 335!) With some effects, it is indescribable, is cost. Too bad this is dlaiss MODEL: fad. (Well they all want the Les Paul). I mean simply that it was also his Les Paul, less dense and with more harmonics, just on a good amp Fidler, without effect. It is plugged into a Fender Super Twin Reverb and it's nirvana!

A glimpse of the sound of this guitar.
http://www.cnpmusic.com/netguitar/demojz7.htm

An exceptional guitar. with one or two pedals you get all the sounds you want. an ES 335 (without) a Les Paul Classic.
Universal guitar? May be. (What's weird is that Gibson Submitted annually MODEL III MESSE Frankfurt)
I love it.