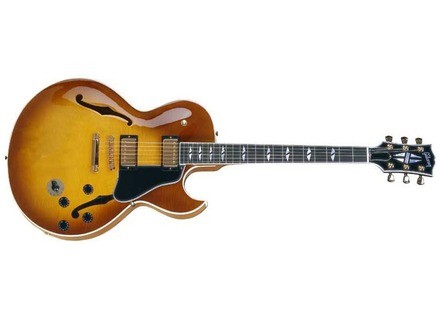 Gibson ES-137 Custom Gold Hardware
5
Wasn't really looking for an archtop. Saw the 137's, liked their looks so I tried them out.
The store actually had two 137 customs and four 137 classics. I played them all and they were ALL different. Three sounded somewhat dull. Two sounded really good. And one sounded great, really bright and lively. I had tried them un-amped. I really liked this guitar and didn't want to leave the store without it.
Paid $2000 cash out the door. Maybe could have paid less... I don't care.

Hard to play above the 18th fret... but then that's just the way archtops are and I am getting more used to it.

Excelant quality of constrution.
Cosmetics are "very good". Just couple of very minor flaws.
Really solid, this thing will lest a long time. A+


Having owned older archtops over the years, (1972 es-335, 1968 es-175, 60's Gretsch Chet Atkins).
I would say that this instrument is as good as any. The semi-hollow configuration and the 6 way Varitone switch make this guitar really versitale. I have 5 other very good quality guitars at this time and haven't played any of them since buying the 137.
I would highly recomend checking one out.

Gibson ES-137 Custom Gold Hardware
5
I'd been looking for a semi-solid that played like a big body 175. But I was
disappointed in recently made 175's I've played.

None had a sound with "body" for lack of another word. As a matter of fact,
the 135's turned me off so much I started looking to Gretsch. I'm glad this one
was in the store to play.

I play an old Epiphone Joe Pass and have really loved it's sweet tones with
or without the amp on. I've had lots of guitars, but you may disagree, but
the Pass is one hard box to beat. The 137 does just that, and that is a
compliment.

The 137 is unbelievably versatile. I read another reviewer who said the tone
switch was useless... well NOT on mine.

I can go from Tele, to Gretschy in a second, and even to my sainted Joe Pass
effortlessly without diddling with the knobs on the amps.

I have an original Fender 52 pro, and a few year old Fender Ultimate chorus.
Both amps sound great with the 137 in them.

I've always been fond of the feel of Gibson "Custom" ebony fingerboards.
This one does not disappoint me at all.


I was surprised that Gibson put on a 1 piece neck... Didn't they go to 3 pieces
to avoid warping?

I'm hoping they made significant advances in truss rods over the years.

Other than that, it's flawless. I mean that... I'm VERY critical, and passed up
a new 175 the week I bought the 137 because it felt "crunchy" like a rush job.
Given that the 137 custom was a full thousand dollars less than a vanilla
175, I really feel good about it.

OK, OK, ONE nit... I really wanted a light burst or tri-burst... I always felt that cherry
sunburst belonged in showrooms, not in the hands... Cherry is the LAST
color I'd pick... this 137 sounds and feels so good, I wouldn't risk ordering
one in Tri or Light burst.

So, I have a guitar that's like a woman in a fancy gown instead of a cocktail dress,
I can learn to live with that

Construction is first rate. Judging by the amount of dust on it, it was in the shop
a long time. Since it's more than double the cost of an Am Strat I'm not surprised
on that count, I AM surprised that with all the handling it's still flawless.

The top and back are nice one piece maple, and this way
you don't have to look for mis-matched halves, it flows nicely.

I've bought very few new guitars (1 more in the last 35 years) and I'm not
accustomed to the "newness"... white, not yet yellowed binding and pristine
pickguard. Oh well I'll have to wait on that.

I adjusted the T"O"M bridge down and the intonation, nothing else needs
to be touched.

Oh, the case... Four latches, one with a combination... Nice touch, as is the
very well padded handle and interior.

What can you do with this box? ANYTHING!!!

From a smoky jazz club to Madison square garden, it'll do it. Now I didn't say
"I" would be in MSG, but the 137 would be at home there.

The little radio buttons should go to 10, because a 5 doesn't describe
it well enough.

Playability and sound on this guitar were first rate. Beautiful tri-burst finish and comfortable neck. The '57 Classic Humbuckers are everything Gibson claims they are. This was my once-in-a-lifetime dream guitar, until...

I could do without the Varitone control. It adds little to nothing to the tone and looks really cheesy to me. However, this is purely subjective. Your mileage may vary.

I noticed right from the start that this instrument was somewhat sloppy in terms of workmanship: rough feeling binding on neck, gap between nut and fretboard due to fretboard having been cut at an angle, nut binding causing wound strings to "jump" while tuning. there were numerous areas of smeared stain and glue on the binding that I was unable to remove. There were marks on the ivory fretboard caused by fret work. nonetheless, I was going to keep this guitar because it felt and sounded great, even though it was also occasionally rattling. Then, two days ago, I noticed a 1 inch crack in the finish originating from the pickup selector switch. I found the laminated top between the switch and towards the neck to be very soft and pliable. I took the instrument to my luthier friend the next night and he confirmed within 20 seconds what I feared myself: the top was delaminated. He also found that the finish in the neck joint was starting to crack! Folks, this guitar is less than 6 months old, has never seen a store and has never left my temp/humidity controlled studio. My friend referred to it as a "Friday afternoon before a long weekend special" He also had a few other choice comments that I cannot repeat here. Thanks, Gibson!
The store immediately recognized the problem, as well and is as helpful as possible. I am hoping to be able to get a replacement but I have already been advised that the Canadian distributor has inactivated this model.

It would appear that some of the horror stories I have read on the internet concerning Gibson quality control are based in fact. I can now add mine to this collection. The bottom line is, that if you get a well-built specimen of this model, chances are you will be very pleased. I know, I was, despite all the warts and flaws. I can only review this particular guitar, though. And this one is literally falling apart. I must rate it accordingly.

Gibson ES-137 Custom Gold Hardware
5
This review is of a Warranty replacement ES-137 received from Gibson factory to replace the fatally flawed unit I reviewed here on 14 March 2003.

All the plusses of the original unit remain. Spectacular BluesBurst laquer finish, Perfectly crafted neck with fat fretwire and enough thickness to fit my larger hand well. Perfect intonation all the way up the neck. Easy to bend and great blues or high distortion sounds.

Versatile voice will give alot of different tone qualities. This guitar has a BIG low end for mellow stuff and wall shaking boogie riffs on the neck pickup but can go high with no muddiness for great screaming leads that distort well on the bridge pickup. I play through a Fender CyberTwin and can get warm clean sounds all the way to total feedback Hendrix Heaven. There's no feedback when you don't want it but it's there when requested. The center block/hollow body hybrid design does the gamut of sounds well.

If you read the review of my previous ES-137, you will hear all about the endless problems with migrating rattles and noises that didn't come from the fretboard. The strap anchor fell off the old unit after only 6 weeks. Turns out it was mismounted at the factory and was drilled through the veneer, missing the anchor block--Result= new guitar from the factory. Took about three months to get the new one but it was worth the wait. All the noises I experienced with number 1 were gone, the strap anchor has stayed on. No problems now for 3 months. I suspect the rattles may have been due to the first guitar having been displayed on the wall in the guitar shop which is located in a very rainy town. Too much humidy?? Then I take it home and store it at the 40% humidity Gibson recommends and the thing self-destructs and starts rattling like crazy. There is a lesson here--watch out for the conditions in the store if they are different from your usual environment.

Number 2 is beautiful from end to end and displays the hand-crafted quality I expected from Gibson. ( I wonder if the builder of Number 1 got mixed up with the Jack Daniels guys just before he put the strap anchor hole in the wrong place?)

I absolutely love my ES-137 but I had to put up with a messed-up one first before I got a replacement that was done right. Maybe it was a case of new model growing pains, but the new one is great. Fortunately, there were no problems getting the exchange. I now have a Gibson that I can play and enjoy to the max.

This review was originally published on http://www.musicgearreview.com
Did you find this review helpful?yesno
»
Read the 7 user reviews on the Gibson ES-137 Custom Gold Hardware »