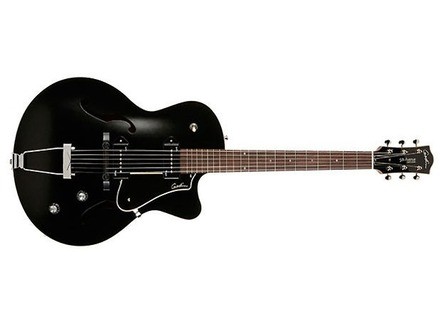 Handle very nice after adjusting the string height at nut like most series guitars
Light
Micro predominant bridge: to get the same level of neck pickup if you want a serious acute balance

I also have 2 more PATENOTES Gypsy, one more jazz IBANEZ Pat Metheny, 1 GIBSON ES175 legendary but this guitar is really versatile and missing from my collection of fifteen classic models, rock, jazz

6 of 10 people found this review helpful

CT-64140's review (This content has been automatically translated from French)"Kingpin II: more versatile than the Kingpin I"

The handle is very nice on geometry. I found him one drawback which is repeated on my other two Godin electric. This is due to a specific treatment of wood? I do not know. The strings are very sensitive to oxidation and neck (including the back) lost after a few moments game its "slippery". We can certainly blame my sweating, but I have other guitars (Duesenberg, Hagström, Gitano) which, with (regarding electrical) the same strings (and my own hands!) Do not exhibit this phenomenon. A retailer Godin me also of himself (although I mentioned the issue with him) mentioned the thing. I avoid my side but Fastfret regularly cleans the strings with product maintenance for Strings Gibson Luthers Choice (sometimes with Dunlop 65 String Cleaner, which unfortunately feels the penetrating oil with molybdenum used in mechanics!) And the default is diminished.

The cutaway allows (in my opinion) access to the acute part of the handle quite easily. However, my game does not really carrying me to go to navigate, this opinion may not be very significant.

Surprisingly light on the door very easily with a strap long hours and I think its nice shape to play seated.

Regarding getting a good sound: on branch (on a good tube amp preferably) and it sounds now! Two microphones, a volume knob and a tone plus a three-position selector. I&#39;ll come back later.

Note: I put 8/10 ("very good) and not 9/10 (" excellent "simply because of the propensity of the instrument oxidation of strings)

I enjoy playing jazz, blues, jazz-rock and a little rock on this guitar. I mounted with Thomastick JS 111. I tried to mount Thomastick BB111 (round thread): the brightness of the strings combined with the warm sound of P90 and cash let me guess the beauty and variety of sounds that could be obtained.

In POWER, I played on a Palmer Fat Combo 50 and a Laney Cube 12R. Excellent on both amps.

Overall, there is a beautiful combination of wood roundness and warmth of P90.

Handle on the P90: same with the Kingpin I, clear sound seems obviously beautiful, very typical "swing" or "bebop" (listen to Barney Kessel records with Charlie Parker) If you push a little gain, we gets a nice crunch sound reminiscent giving quite the sound of the Gibson ES300 saturated in bebop recordings of Django Reinhardt.

P90 on the bridge: the sound is obviously a little more "sour" with the P90 of the handle. Beautiful sounds are learned for the blues to rock a little vintage and probably the rockabily (but not loving at all like this, I may not be very well placed to speak)

I am careful about what I say in the next few lines. With these strings (JS111), my amp and considering my style of play, I found that the Kingpin II behaves well with effects pedals and overdrive the amp. However, this guitar does not seem suitable for "big sound." But I remain cautious because I&#39;m not used to using this kind of sounds: first because of my game, and then because I have a Mustang Floor which, in the field of "big sound" does not seem famous . On the other hand (still caution on my part ...) the "big sound" seems to require the guitar long sustain natural, it has not, like other hollowbody. However, a compromise can probably be found by a judicious choice of strings.

Failure of the guitar (seems inherent Does all P90 "classic"): 1) the feedback comes quickly to medium or high volume, 2) the microphone is very sensitive to magnetic fields and the amp it hums quite easily - to avoid these snoring just find ideal orientation and distance relative to the amp.

In ACOUSTIC mounted with bolts 11 threaded flat action set as close as possible to the button, it does not obviously planned as an acoustic guitar. But the sound does not seem unpleasant. Its true aficionados of true acoustic guitar could, I think, not be totally satisfied. But this guitar is not, in any case made for it.

I have this Kingpin II for almost 8 months. I made the purchase on a heart stroke, after being excited by the Kingpin I searching for a wider sonic palette. And I do not regret this purchase. I&#39;m still as much fun playing it and I think I will not tire of its sound.

For those who want a guitar that sails well between jazz, jazz-rock, rock a little vintage, blues, pop music "classic", this Kingpin II seems to be a very good choice! And those who wear it on stage will enjoy its ease: it plays on! it is fine tuned and is very light to wear.


7 of 7 people found this review helpful

alechat's review (This content has been automatically translated from French)" Boulevard Avenue jazz and blues."

Without repeating what has already been said, the handle Godin is superb and very playable, light guitar, easy access.
The settings offer versatility very effective choice for a wide variety of styles.

For now, I use it to play jazz but I only just beginning to understand the richness of this guitar.
The P90 have much to do.
Currently used with nets round the acoustic timbres emerge more but I also intend to experiment with nets dishes ...

I only used it for 2 months but this guitar deserves all my praise with a great value and superb violin.

Of course, opinions vary as the style and technique of the musicians. We can conclude that it is not the best jazz guitar but saw his qualities and character. It will do the best.

I have other guitars of excellent quality, this guitar is also an approach but requires almost acoustic. We are between two worlds. This guitar is a hybrid that in expert hands will do wonders.

bert'nortt''s review (This content has been automatically translated from French)

the handle was good fun at first ... but the treble a bit narrow to accommodate the fingers,
small comfortable .... however ...

I did "give for nearly two hours" for guitar master hook provided on the handle, sustain laborrrrrrrrrrrrrieux since there is no reinforcement cental "with the amp it's not sad," it must be good for the "dominate" (something I am not )..... with 2 single coil P 90 ', the sound seems quite good there are much worse .... including major brands ...
good in blues and jazz to rock ....... but supported 'and 55 years endiablédes '60', then it gets harder it is for her .... the sonnorité becomes rough, it mixes quickly Audible rendered it can no longer swallow ..... solos, I did not insist.

insufisant for the price .... so I have not considered buying and I Dirrig to another choice .... this is my opinion, it has the merit of being manufactured in Canada ... . but I found it irritating and somewhat too pretentious since she moved like a real ... Blues ... 45/50 years during the electrification of the first grat''popularized for a price, our black friends were able to buy in the southern United States .. ' "It's small size makes the acoustic sound a fair bit of the table without a doubt. .... Is not recommended for beginners too hooked'....... We're not all Sylvain Luc, thus the pro's, all the ways they all have more than 30to 40 guitars (some pretty basic and not necessarily the most expensive .... for only 1 or 2 styles with a highly personalized musical grain). 7a 10 add their amps without the rest rely on "stuff" most of their friends "media pro" who double. See for yourself if you Tirre your strings in this category.

12 of 20 people found this review helpful

Did you find this review helpful?yesno
»
Read the 6 user reviews on the Godin 5th Avenue CW Kingpin II »