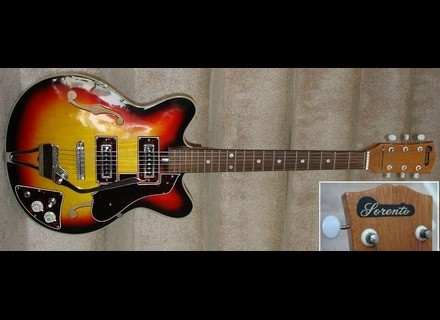 Gallagahn's review (This content has been automatically translated from French)

Greco hollowbody
4
Dsol Sorento is the mark (not Greco), I miss a step in registering the product. My apologies.

Made in Japan, APRS what I found as info on other sites: in the 60s, it's even more crdible that the head is gibson form (called "open book"), and that this PERIOD Gibson sue for more than imported U.S. models of copying his head round.
Hang strings "spring", not free floating, with a bridge bearings.
Two microphones simple slecteur three positions, one tone, one volume.
Channel in a wood a little dark, but I can not say which one.
Body: I ​​suspect the cons plate.
: Mechanical: original style classical guitar / folk (three mounted on a bar: Mechanical single metal, one on each side of the head)
On mine, since I had OCCAZ taient and they died (2: Mechanical revolved no more, so be tuned), and I had in a closet of groovers who slept for quite time, I have a tiny RALIS modif and they quipent dsormais this guitar.
On mine the stem is broken tremolo / missing and the plate is absent.
A oue on each side of the body.

Even if the Materials are not what he does best, it is CONUs, a clean finish, a very good despite jouabilit action I got a little high . The pickups do not larsenent every turn, generally correct.

I like mainly metal, but I am even open to other styles, then the sound treble presents well, but also well rounded bass, frankly very pleasant surprise, because ct despite its low-end, it has a more than respectable, indeed the Japanese are known to have contributed the greatest care all ranges of guitars they made.

For example, I play Personal Jesus dpche mode of it, and the sound is pretty close to the original, basically this guitar is not a stew, but I must confess that I have little knowledge of hollowbody, so my opinion is all relative. Anyway, I like.

I've been around one month, I have other guitars and this is a very original pice among others, from the point of view of its design and its sound. Frankly I made a big deal since I got it for not a circle, one person put an ad on the internet and gave it, I won the beautiful and I am very happy, thank you to him. I found an estimate on a site amricain: 379 dollars, but the silent one in perfect condition.
I thought to take it and sell it later (times are hard, rounding the end of the month as can be), but eventually I'll keep it, I guess it has little value, but it is a beautiful pice, especially as it is about 20 years my groin, then out of respect for ancestors, I do not dbarrasserai not (at least for now).