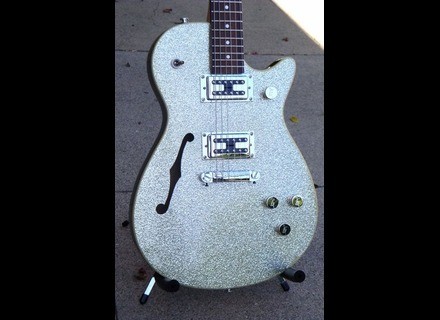 Gretsch G2626 Sparkle Jet
4
The Gretsch 2626 Sparkle Jet is a semi-hollow body electric guitar that has a single F hole. I don't know too much background information on this guitar as I was only introduced to it since we have one at the studio where I work. The guitar has two 'Gretsch-Bucker' humbucker pick ups, and has single cutaway body design. The neck is made from rosewood, while the body is hardwood. It's got a laminated sparkle body, hence the name...

Playing the Gretsch 2626 Sparkle Jet is really a pleasure. It's not at all hard to play up and down the neck as it's got a nice and thin neck. As far as controls go, it's got a master volume knob to go along with volume control for the neck and bridge pick ups. There's also a tone knob and a pick up selector switch to toggle between the two of them or blend them together. Not too hard to get a nice sound from this, or at least to get to the core of what this guitar sounds like.

While it doesn't sound as cool as it looks, the Gretsch 2626 Sparkle Jet is capable of getting a nice array of different sounds. In my personal use I've found it best for rhythm guitar parts rather than lead tones. While it's certainly suitable for both, since we have so many different guitars at the studio I tend to use the ones that are best at what they do in those scenarios. I like that there's a good amount of control between the two pick ups, but it's not a huge game changer in this situation in terms of versatility.

The Gretsch 2626 Sparkle Jet is overall a pretty cool guitar. It's not my favorite out there, but it's a nice change of pace and certainly has a look and sound of it's own. The sparkle finish will grab a good amount of people, but I do wish it sounded as good as it looks. I'm not really sure the price on this, but I wouldn't pay a great amount for it. Gretsch has better guitars than this, but it's certainly a cool one in it's own right.
Did you find this review helpful?yesno
»