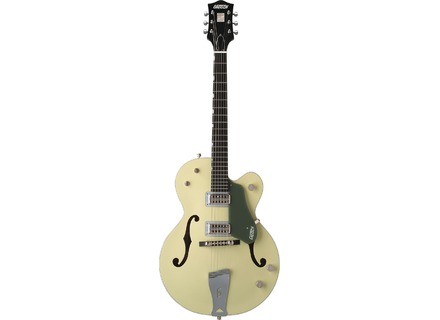 Gretsch G6118 125th Anniversary
5
Primarily a singer, I've been playing guitar for about 10 years, been in a band (drummer!), and have continued to record and play with other musicians on a non-professional basis. My styles range from folk to hard rock, with heavy power-pop leanings -- Big Star, not Green Day.

This guitar was purchased from Sam Ash in Hollywood for $1700.

I've played many Gretsch Electromatics and have never been impressed. Once I picked up this regular Gretsch (nicknamed "Annie", because it was first issued for Gretsch's 75th Anniversary), made in Japan, it was a revelation. The fretboard is amazingly smooth and inviting -- even Gibsons of comparable price and stature don't feel quite so comfortable on the left hand. The nitro-cellulose finish looks and feels stunning, the typical adornments on the Gretsch hardware are classy, the colour ("2-Tone Green") is beautiful, and the large body actually feels very comfortable to play because it offers up so much arm support. And this is coming from an SG player.

The clean sounds of this guitar are amazing, clear as a bell with a very woody character (more organic than the typical "hi-fi" Fender clean sounds), and overdriven sounds are complex, with great cut, growl and texture. These FilterTron pickups sound majestic. Other reviews of this guitar have mentioned that aside from the lack of neck and headstock binding, this guitar is sonically very similar to the classic, much more expensive G6120 models, making it an excellent alternative, especially for rockabilly and Duane Eddy-style twang.

String bending is not that great on this guitar, because of the high string tension caused by the tailpiece. And I'm not a big fan of Gretsch's tone switch; rather than giving you a tone pot, this guitar has presets accessed by a three-way toggle. The "wide open" middle (bypassing the tone circuit), but I have yet to be able to get a truly jazzy or Gary Moore-ish tone out of this guitar. For cutting, wide-open twang this guitar has no peer, but I wouldn't say it's as versatile as my Eastwood Red Special or Gibson SG.

Absolutely fabulous. Looks beautiful, feels gorgeous, flawless presentation that reeks of class. May just be the most well built guitar in my collection.

Quite simply put, I love this guitar. It may not do all the tones I need -- and I tend to use at least a dozen different guitars per record -- but it does the signature Gretsch sounds so well that you could just have fun with those. It sounds organic, complex, and feels fantastic. I wrote about eight song ideas on this guitar the first day. If you love the sounds of Malcolm Young, Duane Eddy, Brian Setzer, early Neil Young (such as "Ohio") or Stephen Stills, you'll like this guitar. It's even loud enough to be played acoustically as a songwriting or transcribing tool.