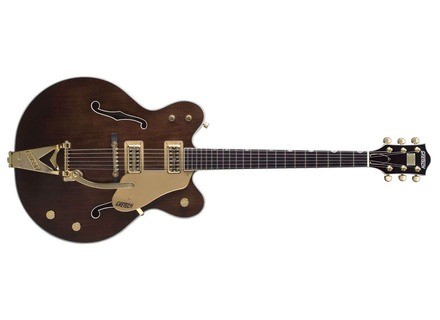 Gretsch G6122II Chet Atkins Country Gentleman
5
This is a hollow-bodied arch-top guitar made by Gretsch, who have continually proved their excellence in making guitars of this type. It has a Bigsby-style tremolo bridge with tremolo bar. It has a surprisingly thin body made of maple, which is also what the neck is made of. There are 21 frets, two soapbar pickups and a partial block under them. There are two knobs, volume and tone, and a pickup selector switch. It also has a raised pickguard.

The neck is surprisingly slim, and easy to play. This gives this guitar a great advantage in playing Jazz and country tunes, as the manuevers needed to play those styles well can be easily done on this guitar. The sounds that can come out of this thing are phenomenal. It feels a bit heavy, but it's not quite as much a burden as some of the larger arch-top guitars of its era. Everything about this guitar is pretty solid, it is easy to play, easy to hold, and not too difficult to carry around. The drivers on my version are definitely stable.

This is a great sounding guitar. The clean tones on it are outstanding, and certainly would put most solid-bodied guitars to shame. Its certainly a great guitar for country, as Chet Atkins was apparently the one who gave his input into it (it's also named after one of his songs). It's also a good guitar for specific kinds of jazz, namely big band and old-time jazz that still had a lot of country elements. The tone is thick and warm without being too mid-rangey, and it doesn't distort very much at all. It wouldn't be a bad guitar for other genres, like rock and blues, but it would have to be relatively mellow versions of those genres, as distortion will make this thing feedback like you wouldn't believe. It also wouldn't be the kind of feedback that would intrigue the likes of Sonic Youth, but rather, just annoying feedback that ruins tone. So definitely stick with the mellower stuff on this guy, which should be more than enough for anyone, as those sounds are heavenly.

This guitar is a real piece of work. Between the comfort of playing it, the amazingly great look of it, and the great clean tones on it, this is a pretty solid guitar. It's definitely going to run you a lot of money these days, but chances are, if you're even looking at a guitar like this, you've been playing a long time, and might be able to afford it either by saving up or trading some other guitars. Plus, buying a used version might even be cheaper than a new reissue (and probably would sound better, too). In short, if you're intrigued, check it out. Once you do, you'll want it at least a little.
Did you find this review helpful?yesno
»

Gretsch G6122II Chet Atkins Country Gentleman
5
The Gretsch G6122 Country Gentleman was made in the USA and is named after an old Chet Atkins tune. I'm not sure the exact number of frets, but it is over twenty. It has two humbucking pick ups and two pick up switch selectors as well as tone and volume knobs. It also has a Bigsby type whammy bar. I don't know what the neck is made out of but it feels great overall and is easy to play. It is a hollow body guitar which makes for its unique sound.

Overall, the Country Gentleman is easy play and has a great feel to it. It is great for playing both lead and rhythm guitar as it is easy to play all around the neck. It isn't too heavy, since is it a hollow body, and has an awesome look to it. It is easy to get a nice sound from this, as the inherent sound is full and clear.

The Gretsch Country Gentleman has a sound of its own that is great for all types of music. It is especially great for jazz, country, and pop. It also works for certain types of rock, but its specialty lies in the previously mentioned genres. I usually use this with a Fender amplifier and generally only use the clean sound without any distortion. The hollow body figure makes for an awesome electric guitar sound.

I've been using the Gretsch G6122 Country Gentleman for a while, as this guitar has been in my family for a number of years. It is one of my favorite guitars to play and has a great sound to it. The look and shape of the guitar is absolutely awesome and it plays with ease. Overall, the Gretsch Country Gentleman is a classic guitar that every guitar play should try at least once.
Did you find this review helpful?yesno
»