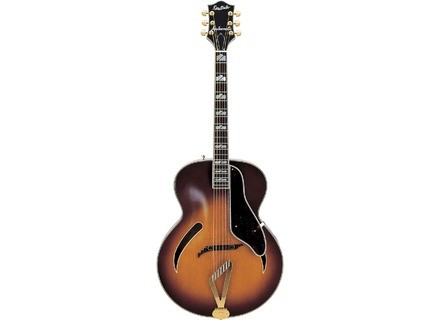 Gretsch G400 Synchromatic
5
The Gretsch G400 Synchromatic is an acoustic guitar that looks like the style of a hollow body guitar.  This isn't your typical acoustic guitar by any stretch in terms of both feel and sound.  The guitar isn't electrified, so it doesn't have any pick ups and can't be plugged in.  The jumbo body isn't typical looking for an acoustic guitar, and is what helps to give it it's unique tone.  The neck is made out of maple and has a beautiful inlay design.

The feel of the Gretsch G400 Synchromatic is besides the tone, my favorite part about the guitar.  The action is very low for an acoustic guitar, giving it the feel of an electric and acoustic combined.  It's very easy to play, as the neck is fluid and it is easy to reach the frets up and down the fretboard.  The weight isn't very heavy at all, as I found it easy to hold and carry around without an issue.  I've never had a problem getting a great tone from the G400, as it has a great inherent sound to match its beautiful look.

While you can definitely tell that it is an acoustic guitar, the tone of the Gretsch G400 Synchromatic is unique for one.  I've used the guitar in the recording studio only, and each time that I've used the guitar I've been quite pleased with the end result.  The tone can be described as being more edgy and vibrant than most more traditional acoustic guitars, in my opinion.  While it definitely has a unique sound, this doesn't mean that it won't work in a variety of genre and applications, as I've found it useful not only on country and folk music, but for rock and pop as well.  However, since it isn't your typical acoustic guitar sound, I would definitely recommend trying it out first to make sure that it fits in with your style and the sound that you're trying to achieve.

The Gretsch G400 Synchromatic is probably one of the nicest and coolest looking acoustic guitars that I've seen out there.  It also has a killer tone and a very agreeable neck, making it an overall very special guitar.  While out of the price range for beginners and probably most mid level players, the guitar is definitely reasonably priced, as it costs about a grand and a half new in USD.  For such a good looking and sounding guitar, this is more than a reasonable price, especially coming from such a renown company such a Gretsch.  Even if you can't afford this or aren't in the market for something like this, it is definitely worth checking out in person - even just to look at!