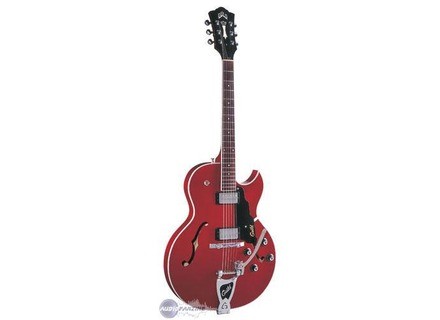 RamblerSteve's review"Still a Great Guitar Holding a Lot of Memories"

Guild Starfire III
5
I bought my Cherry Red Guild Starfire lll back in 1965 when it was brand new for $250 which included a hard shell case. I picked it because it looked like Johnny River's Gibson that he played on Shindig and at the Whisky-A-Go Go and I couldn't afford the Gibson. I still play it at gigs. The finish has held up well but some of the binding is starting to pull away from the wood where the pick guard bracket is mounted to the body. It stays in tune as well as any other guitar I own, maybe better. Other than installing a tune-o-matic bridge with roller saddles on the aluminum base, for better intonation, the guitar is completely original. It has the sway bar made by Bigsby but branded as a Guild like they all do, which is why I went to the roller bridge. The original kept breaking strings. What I really like about this sway bar is that it is always reliable and the guitar will not go out of tune through use or if a string breaks. I cannot say that about any of my Fender tremolo bars. I play rock, blues and country through a Fender Blues Deluxe Amp and this guitar does it all well. It really shines as a blues guitar. The sound is stellar. The only con I've noticed with it is if you stand too close to the amp it will feed back a lot since it is a hollow body. In the 60's though this was a plus given the type of playing that was going on. It does lead and rhythm well as you can take it from a full body sound to country twang very easily. The electronics are still original and perform well and the neck is still perfect on it. It plays as well as the day I bought it and I've played it from New England to Guam. All in all I couldn't have bought a better guitar at any price, and I don't think a Gibson would have performed any better. Sorry Johnny. I think its great to be able to see my 15 year old self in photos playing the same guitar I'm still playing at 70 years old. I don't know if the new ones are any better or worse but I do know that this one is still a great guitar and holds a lot of memories.
Did you find this review helpful?yesno
»

Guild Starfire III
4
After much hinting about wanting to get an electric guitar, my wife gave me $1500 as a Christmas present and turned me loose. I had been window shopping and test playing at numerous stores and had all ready decided on the Guild Starfire III. I paid $1395 at Guitar Center in Eugene, Oregon two years ago.

The looks ( I got the blonde ), the playability, and the tone hooked me. The neck reminded me of the 1962 Gibson Les Paul Jr. that I once owned. I test played several Gretsch's and a couple of different Gibsons, but the neck on the Starfire kept drawing me back.

Guild refers to it as light, but it seems to get pretty heavy after hanging around your neck for a couple of hours. Intonation and general set-up needed quite a bit of adjustment. Did not care for the strings it came with.

Overall fit is very good, couldn't say excellent because there are some very minor imperfections at a couple of joints. The finish is holding up beautifully after a couple of years with just the normal cleaning and occasional polishing.

Guitars are very personal. The neck fits my small hands, and I love its looks. I thought when I bought it that it was a tremendous value and I still think so two years later.

Guild Starfire III
5
This is a hollow body guitar made by Guild. I know them mostly through their acoustic guitars, but this is a fine guitar as well. There are not many of them left now as they were predominantly in production in the 60s, but there are also reissues of them floating around out there.
The guitar is a hollow body maple guitar. It has a rosewood finger board with 20 frets and a neck cutaway on the body. There are two humbucking pickups, a tone and volume control for each pickup, as well as a three way selector switch in the upper left hand corner (from the player's perspective). It also features a Bigsby vibrato tailpiece.

This guitar plays really well. I haven't had any issues with playing it yet, and it stays in tune great. The cutaway allows leads to be played really easily. Though honestly this is a rhythm guitar through and through. I don't actually tend to use this one like a normal hollowbody, rather, I let the thick rhythm tone cut through it nicely. It's not the heaviest guitar out there so it's not too hard on your back or shoulders.

This guitar is just an amazing sounding instrument. Unlike other hollowbodies, I don't really prefer this for jazz or country (though it does work with both of those). I really just like to rock out with this thing. It has a reckless, ripping sound to it when you combine it with the right fuzz or distortion pedals. I really need to get this thing going through a ripping tube amp, no solid state allowed. I really tend to like the bright punchy sound of rocking chords for indie-rock style stuff, as well as more classic tones. It can get noisy but that's never been too much of a problem for me as I like my stuff a little noisy. It tends to work for me when I'm rocking out.

I really like the ripping tone of this thing. I couldn't believe that a guitar that looked so nice and polished could get such an in-your-face sound. I really underestimated this thing. While it's expensive, its such a great guitar that it's totally worth it. You could also spend a lot more on a guitar like this and not get anything close to it.

Guild Starfire III
5
Made in America in 2001 so one of the last Guild Electric
Flamed maple body in natural finish (there are versions mahogany seems to me there), mahogany neck and rosewood fingerboard, two humbuckers Guild. Comes with two floating bridges / tailpieces: Bigsby vibrato bridge with aluminum must be regularly replaced or trestle bridges on adjustable wood base (for better intonation and stays in place better) and grouse and tailpiece. The tuners are Grover.

Well ... The only thing about the original (besides the items listed are pre-assembled with care) is that it's a half box without central beam, not like a Gibson ES-335 and it changes everything for the weight and sound.

No over-decoration, it remains in good taste. No overloading of nacre, so nothing too much.

What could be useful to add? If there is serious: the splitage microphones or mechanical obstacles (in the case where we mounted the Bigsby), or - in extreme cases of delirium - a Varitone.

I'm mostly an acoustic guitarist and I've never managed to get the proportions and mass balance of solid bodysuits. I climb ropes net semi-flat top so I'm not sure my ergonomics criteria are those of everyone.

To access the treble is a semi-hollow jazz junction of the handle with the cash box at the fourteenth and not a Gibson SG, so even if the neck is excellent, this is not for the Schreder in treble.

Controls are effective and knobs are progressive.

In short, it provided a guitar for jazz, country or rockabilly, and has been carefully designed for that.

When the Bigsby is mounted, its use would oppose the holding of the agreement if it is excessive but if the tuning is good.

My game .. is very personal ... I defined myself as a guitarist doing most wanted a simple accompaniments rhythmic but not as a soloist. To give references: JJ Cale and Gabriel Yacoub. Otherwise, I love John Scofield, but I do not do as much as him.

For sound, I'd say it's the missing link between Gibson and a Gretsch. I was looking for a guitar that would allow me to go from jazz to rock to Tom Petty with a great ride especially in Chet Aktins and that is why I chose it.

Next the whole bridge / tailpiece used, it has a rather different sound. The bridge's aluminum Bigbsy allows a more incisive while the tun-o-matic bridge on wood sounds more organic and more jazz.

I play mostly clear sound in a Laney Lion Heart 5W all-tube Class A (tone at the Vox) but is capable of Starfire in saturated sounds nice but with the hollow body, I do not dare too much for fear of starting feedback (and that's not my thing).

Three mic positions all have a good personality. The neck pickup is warm and be organic, the bridge pickup slammed knows to be necessary and the intermediate position is a good balance between the two. They are quiet but ... they are double coils is provided for.

Negative point: there is a parasite that vibrates and stuff that I have not yet identified although I think it's at the plate. It's not really hard and it does not pass through the microphones.

I bought used 5 months ago. A few years ago, I sold my Danelectro because I did not feel comfortable with a guitar solid body (or almost). I play for 13 years and tried a lot of electric guitars and I do not think buying an electric one day (I was gone for a Martin D28) and continue to put in my micro magnetic roses when I wanted a sound Electric (JJ Cale again) but this instrument has a good balance between acoustic and electric guitar:
- Ergonomics typed enough jazz
- Good range of sounds, at least those that I seek. As I said, it's a good balance between Gibson and Gretsch.
- A sacred look without excess

I appreciate the flightcase excellent and the idea of ​​offering both a normal tailpiece and Bisby.

For the price - 1300 € in my case - I have an instrument of excellent craftsmanship, reliable and durable. Compared to other semi-prestigious banks, I think what has not been invested in the glitz has been in the design and construction. For the same price at the time, we had a Gibson ES-135 and it was a Gretsch dream. So I think there has been an instrument you do not pay but the name of a level anything but amateur.