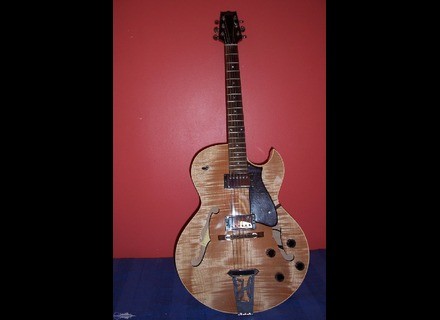 game.boy's review (This content has been automatically translated from French)

Heritage H-575
5
Heritage, as its name suggests, seems to assert the "heritage" of the production site of the historic Gibson guitars in Kalamazoo Michigan.
The idea of ​​launching the brand of guitars "Heritage" began when, in 1984, Gibson Guitar Corporation closed its plant in Kalamazoo, Michigan to transfer all production to its other plant in Nashville, Tennessee (in operation since 1975). When this occurred, some employees were asked to move to Nashville. However, several families were rooted in Kalamazoo, and have not followed this industrial moving. As a result, three men, Jim Deurloo, Marvin Lamb, and JP Moats, decided to resume the manufacture of guitars. In 1985 when the Sté Heritage was created, two other former employees of Gibson Guitar Corporation, and Bill Paige Korpak Mike, joined the three buyers. The greatest resource is the founding, and remains, the reconstituted group of artisans. The owners themselves were all over 25 years experience gained in the traditional manufacturing guitars. To date each of the owners remain directly involved in the manufacture of each instrument.

Manufacture resumed in the oldest (1917) of the five buildings operated by Gibson Guitar Corporation. Much of the machinery and equipment had been used even today were bought with Gibson Guitar Corp.. Legacy produced the first guitar was a solid body H-140 which was exhibited at NAMM in June 1985.

Since then many models have completed the range of instruments mass produced or custom in all lines (solid-guitars, half-hollow and hollow body). The guitars produced are of excellent workmanship with a clean finish. Because of their quality / price ratio, these models may therefore be, according to experts, an alternative choice in relation to contemporary models Gibson.

Model H 575 at "5" is almost a replica of the ES 175, with easel and wooden shield: very beautiful sound and beautiful in acoustic sound palette amplified through two humbuckers.

Handle very nice and comfortable, no shrink "smearing"! We do not sciera fingers! Output jack built into the pad for attaching the shoulder strap.

Perfect for the Jazz (the beautiful "wood" balance bass / treble), fusion and even how Rock'N Roll Stray Cats.
Risk of feedback (like all Hollow Body!) With very high volume.

mangifirek's review (This content has been automatically translated from French)

Heritage H-575
5
Jazz guitar half body, cutaway made in the USA in Kalamazoo in the former premises of the old Gibson with the remaining brands to establish the brand The Heritage.
She replica of the Gibson ES-175.
Channel 21 boxes, wooden easel, solid maple body, 2 chrome humbucker, 2 volume knobs, 2 tone knobs, a chrome tailpiece, mechanical oil bath.

Channel superb late, very pleasant to the touch and easy handling.
The cutaway makes it easy to go to the last frets easily and the half body gives comfort terrible general use, it fits perfectly on you.

The sound .... it is simply beautiful and the further down in the more acute it is good. I use a VOX AD30VT and I am always amazed by the sound that I have!
I use almost no effect tellemnt I like it like that, even if sometimes a little BF3 flanger boss adds some depth to the sound, but frankly, it's luxury!

I've had about seven months, and it goes, the more it goes! O))
I love the sound and playing comfort and even if the toy is not given, the result is really there and I do it again this choice in a heartbeat.
A try for lovers of the hot, jazzy wish.