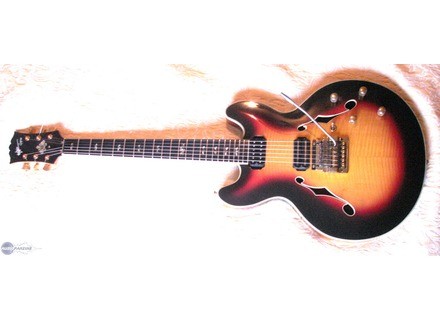 warhol's review (This content has been automatically translated from French)

The handle is very nice, very close to my Les Paul Artisan 1979, which for me is a reference in the field, but with a twist: slightly larger mid-bass strings and half are less acute near the edges, allowing the effects of lateral tremolo.
Access to the last fret is a semi-hollow, it must do some finger gymnastics, heel located at the 20th cargo.
The cabinet is made from solid pieces of mahogany and maple, weight (3.8 kg) is slightly more so than a traditional model, but no relation with my Les Paul (5.4 kg).
The ergonomics are good: the buttons position, balance of the instrument ...
... and sound: see below.

Seeking a versatile instrument, I chose a half box that provides more than a solid body attack.
The neck-to which are fixed microphones and the tailpiece enhances sustain, but also eliminates the feedback inhering in this type of instrument.
I use a tube preamp Lag Spitfire, a Quadraverb More Alesis (not a GT), an Alesis RA-500 amp attacking two speakers, each equipped with an HP EVM12L.
With it (almost) all the sounds are allowed, clear sounds as "strata" (SH-9!) sounds heavy (and feedback!) Through no jazz or blues sounds (SH-AH), rock, hard -fm ...

It is now almost 17 years I have acquired, after having had several Stratocaster, an Ibanez George Benson, a Les Paul is the only one I use regularly, even if sometimes I plug in the Les Paul, it s' so accustomed to have a vibrato ...
The price of € 3,000 (at the time, 20,000 francs) is closer to that of a Gibson ES-335 (with no vibrato and feedback easily) ... you conclude.
If it again? In 1990 I was hesitating between buying a Gibson and to make my guitar by a luthier.
Today I would ask myself the same question and I would not directly to Mr Prudent!

PS: I just change the pickups for EMG-HZ (passive - because I do not know where to put a battery) and replace the preamp with a Peavey RockMaster Lag "all lamps".
The range of sounds was further enriched: the hottest jazz sounds with the neck pickup, and sounds totally saturated with the metal bridge pickup.
Did you find this review helpful?yesno
»