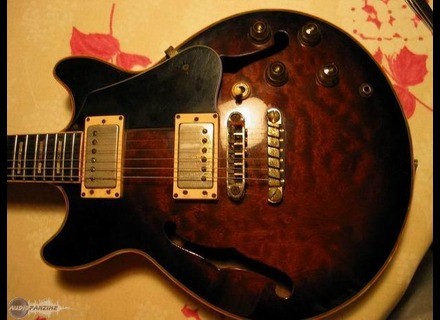 AM205, Hollow Body/Semi Hollow Body Electric Guitar from Ibanez in the AM series.

Ibanez AM205
5
I got this guitar online through a Canadian music store named Capsule Music. I payed $750 for it, and it came with hard case. It was made in 1985 in Japan.


The AM205 is the coolest guitar you could ever have. It's a double cut-away semi-hollowbody with a body size no bigger than a double cut les paul. Those kinds of guitars are just so hard to find. What I love about it is that it never gets out of tune, has the richest, warm, yet clean sound you can imagine, and looks amazing. It sounds like Trey Anastasio's languedoc, and looks a bit like it too. The neck is fabulous, with beautiful pearl inlays, nice round frets and a great action. It's also relatively light and that makes it easy to play it standing up for hours. It's the perfect all around guitar, with the clear and warm jazz sound, and an awesome sustained rock sound.


perhaps the only thing I don't like is that you can't get the twang out of it, like you can from a strat. I still miss the great note-to-note definition of the strat, where each note has its own little click. On the Ibanez, that doesn't happen, because it has a slightly shorter scale, and humbuckers. A whammy would be nice, but that's too much to ask for.


The Ibanez AM205 it a semi-hollowbody, with a pair of very nice humbuckers. It has gold hardware, although the gold has peeled off the pickup covers a little. It has two volume and two tone knobs, just like a les paul, except the 3-way toggle switch it right next to the upper volume knob, and not on the upper "wing" region like on the gibson. It has an ebony fretboard, with triangle-inside-a-square pearl inlays, and 22 frets. There is a gorgeous inlay on the headstock, like most Ibanez Artists do. This guitar is amazingly crafted. every detail is done with great care and attention


It's the best guitar I've ever had, and I've had les pauls and epiphones and hammers and strats. It kicks the les pauls ass - much more pleasing to play, own and pay for. If you want an awesome hollowbody and can't afford the overpriced PRS and Gibson, and don't want to settle for the dot, try to find one on the web. many people have them for sale.