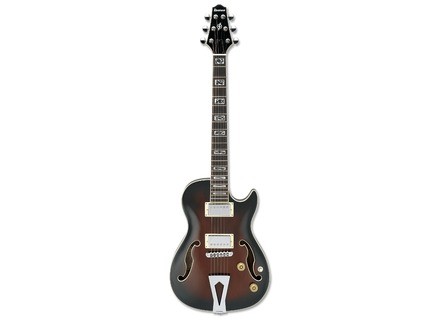 Mikka Grytviken's review (This content has been automatically translated from French)

Ibanez AXD82P
4
Chinese-made ... yeah they make every now and why not!
22 frets, rosewood fingerboard inlaid with mother of pearl, 2 doubles, bridge tun-o-matic (I write as I want; a)
Mechanical clutch, trapeze tailpiece and the whole shebang ...
1 volume, one tone and a 3 position switch.
Set neck, 3 pieces (* mahogany, maple)
The body is mahogany back * to the central beam and éclises.
The table is in Spruce (Spruce) laminated three pieces
(Do not worry the Gibson ES175 home too and it works very well)
The exterior finish is quite well done on the other hand if you remove the microphones,
you may have some surprises!
* PS: Mahogany: some say it is of nato and most likely they have reasons
lag but uses a wood they call African mahogany?
There is no more mahogany Africa and Asia ... and it does not shock anyone!?
Indeed mahogany is native to Cuba (for the variety that made this famous wooden)
This variety is also called the Lesser Antilles in the small-leaf mahogany.
There is a large leaf variety widely used in woodworking and instrument making for its aesthetics and lower cost (this is also used by Gibson).
And yes even Gibson does not use true! And they sound their guitars.
Actually called mahogany (therm generic) a bunch of tree species differ
therm in botany but have therm wood mechanical properties, acoustic and Aesthetic similar.

The handle is nice in D with a small flat in the middle of the curve and the radius of the button is semi-modern. The patent is quite nice but a bit too present to the touch for my taste.
The access to treble is normal for this type of guitar.
I like the lightness and small size.
Aesthetic makes it a lot.
Acoustically, it behaves really well.
Beautiful harmonics with a stake in the attack p'tit neat.
The bass is very present and warmth to go (I DISEZ Mahogany ...)
And a surprise to sustain this type of range.
But when you plug it to drip pan!
The pickups are Ibanez incipides!
Horrur!
It does nothing of the potential acoustic instrument
as we have it reduced the bandwidth of the spectrum.
Sustain only the remainder.
The sound is dark and does not tell anything.
So, given the acoustic qualities of the guitar I invested in two double
Seymour Duncan (SH2 & SH4 that's my personal taste).
Ben well done and I have no regrets!
I added a split via knob Push_pull and it is a Delisse.

Ouiai and it suits my style ...
... Soul, jazz, blues (at Robben), California pop (like Larry Carlton), Funk ...
The SH2 position has something serious split in the warmth of acoustic
Smooth it terribly ... and double the sound a little shooting next p'tit Gretch unexpected!
The SH4 also goes wonderfully bluesy and Rock 'n Roll following the game
Both splittéss and his associates PARALLEL funky.
She loves the lamp ... the rascal!
There, she scores.
Well I can not put ten because although it is not a safe L5 or an ES335 ...
but it deserves its 8

I have been using can ...
I have been around 6 months
but I was playing in the acoustic waiting to buy the pickups.
I recently changed the pickups
But the difference is so striking.
In over fifteen years, is the first time it's so remarkable.
I especially like the sustain and tone acoustic guitar
very well restored by the SH2 and split all sounds so different that I can get
while concervant personality at once singular and rich.
I find it just too bad for having to spend another € 300 to take full advantage of the quality of the instrument.
And changing the microphone is not much fun on this type of guitar!
Then the value for money takes a lot for his rank.
Especially in brackets below the micro milling was (pardon the expression)
bitch!
Anyway I like the sound then ...
... And also the look and overall comfort ...
... Houff!
I'm still pretty happy.
Let's hope it lasts

Edit the December 6, 2006:
I'm still very happy!
I use it live in the studio to work at home ...
I have access to a range of sounds, Jazz, Blues, Soul, Rock ...
And I like the Conford game as much as the acoustic qualities.