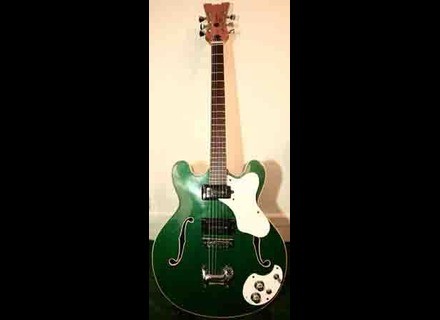 malouine's review (This content has been automatically translated from French)

Mosrite Celebrity hollow body 60's
4
The neck of this guitar is super fine. The frets are rabottées which makes it all super fast. One would think playing on a fretless.
The ergonomics are excellent and access to acute is perfect.
Plug and play, the sound is good right now.
Moseley vibrato works well but is not as dynamic as a Bigsby.
For cons, the look is far more sought after I think.

The natural sound of this guitar is excellent, you feel immediately good work. Once amplified, the same.
rem: we must add, however, a good reverb to enjoy it.
The pickups are humbuckers Mosrite that are very good.
I play mostly sun but the neck pickup bridge pickup sounds great.
Ideal for playing blues, surf, punk, rock.

Superb guitar collection, performed with taste and professionalism of an almost artisanal in California ... it is a dream.
A true collector.
Did you find this review helpful?yesno
»

berdeforcal's review (This content has been automatically translated from French)

Mosrite Celebrity hollow body 60's
5
the handle end is fantastic, I think it's great, the frets feel pain, it's a real treat

super nice guitar, I bought it in 1990 in France instead of the magnetic Nation in Paris, I have been stolen in 1995 or 1996 in Forcalquier during a burglary with a fender MusicMaster on which I added a tele bridge pickup and vibrato of Mustang. To return to the Mosrite a great guitar, good access to acute, well its clean and crunch guitar oriented. The vibrato is like the advice I read harder than a bigsby. Connected to a Princeton or Deluxe Reverb it kills.

I found the perfect guitar and if I'm going to state I'll buy one with a venture. The sounds are superb, very difficult to compare with other brands, it is both in the vein of a jaguar or a gibson hollow in p90 but that has nothing to do when it has hand. The Mosrite guitars are really apart

Super guitar, but nevertheless I find that prices are excessive (for vintage guitars in general). In the 80 vintage guitars were affordable when there was no equivalent of nine, now offers more extensive and there are great guitars at great hypermarkets correct, it was not case before, I count myself one day repay a celebrity and a venture-because it is not equivalent to fair price unlike Fender and Gibson. If there were copies of the style Custom77 I would take the copy without hesitation. In fact, you saw the top of the custom stick 77 is in Mosrite they bite the idea. And it succeeded. Here, the guitar is for nothing but I think the price of vintage guitars is a mixture of three elements:
speculation scam + + super stupidity
Did you find this review helpful?yesno
»