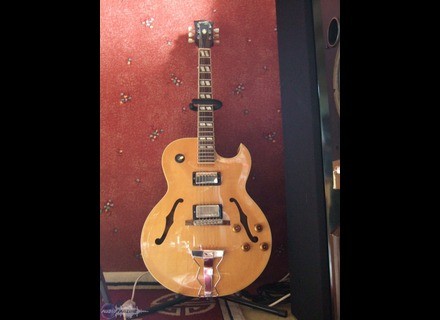 deltablues's review (This content has been automatically translated from French)

Orville ES175
5
Japanese manufacture of very high quality ..
more than perfect copies authorized by Gibson .. reserved only for the Japanese market ..
the Orville by Gibson and Orville were made in 1984 ..?! but more likely since 1988 has .. then stopped 1993-94 to make way for a Epiphone ..!!!

Not being an expert on different measures of race .. I would simply say what is held very well and it's nice entry ..
for acute ca .. s'aparente strangely has a Les Paul .. .. a little less obvious though .. very accessible, but all the same ..

otherwise very good general equilibrium .. the handle is very short .. it will fall ever before .. sitting sculptural beauty that you will fit perfectly ..

..?!? hours for his question seems to me ridiculous .. yes it sounds very easy and better than that ..

This guitar is obviously typical jazz jazz .. but am not part of my musical culture .. I reserve has very sound blues..rock / roll..voir hard rock was the Ted Nugent ..! Well on it is not a Byrdland .. but should not be very far ..

connected to a Marshall DSL100 coupled itself has a 1960 TV .. .. 25 watts 4x12 Greenback
it is warm and well balanced .. .. in the bridge position is clear but mostly it's full up .. I have never played the guitar one capable of delivering low as full and ample that it .. even my ES335 in the same brand is not capable of that and yet it is very good too ..
for fatter sound .. no problems even if the P90 would certainly be more appropriate ..
otherwise there is nothing which I prefer, or I hate this guitar .. plain kicked me c.. I love it ...!!

Clearly It's been a while since I ogled hanging on the wall of the shop .. being a jazz guitar has the original I still decided to try it ..
since I'm not back ..! love being a couple of Gibson-Marshall .. I could not ask for more .. the next will be some with P90 in history .. top it off ..
I love the most is first the sound and then the beauty of the instrument (natural blonde ..) between the two though I do not know really ..
to be honest the same model of Gibson, who was three meters away was the pale figure .. .. literally and figuratively!

for the quality / prix..vous want to know what ..?!?.. aahhh .. compared to a Gibson ..?!.. ben .. frankly it's not worth to discuss the .. Gibsons have become far too expensive .. the quality was monitored in the most random paths .. and even in the end the more they care for them properly .. at Gibson would take at least a custom shop or L5 to be sure of the Quality ..!!!

with the experience to be honest .. if I can get an Orville by Gibson I prefer it to a Gibson and I am ready to do it again ..

jojolafreu31's review (This content has been automatically translated from French)

Orville ES175
5
It was a long time that I wanted to get a real ES175, the major problem is the steady decline of quality in Gibson and the exorbitant price models "Vintage". So I searched on the side of copies of good quality and after hesitating between Ibanez and Aria of 80/90 years I fell on this model.
Made in Japan under license Gibson, like all Orville By Gibson, it seems to have been assembled with great care. Its characteristics are identical to an ES175 made in the USA, including microphones and varnish.
I bought it used - it is 1991 - but in excellent condition.

The handle is very nice.
Good sitting balance.
The sound is both warm and clear and just waiting to blossom over time.

As jazz guitarist, this model is perfect for my style when I attack the directory Bebop (I use for melting in a model of Ibanez Scofield)
What m'interressais at the base, the sound was mostly obtained with the microphone near the handle, with deep bass and midrange velvety, but ultimately, trying to link the two microphones, I was very pleasantly surprised a very useful sound support, with highs that look good without adding any aggression.
It rings of hell on my EAR or my Fender Champ tube.

The price / quality ratio is excellent. Nothing to do with the Epiphone copies and other chinoiserie of the moment. Much more interresting that Gibson let alone the current price.
This choice I would do without hesitation.
I do not put as only a 10 ES175 manufactured in Kalamazoo deserve a 10