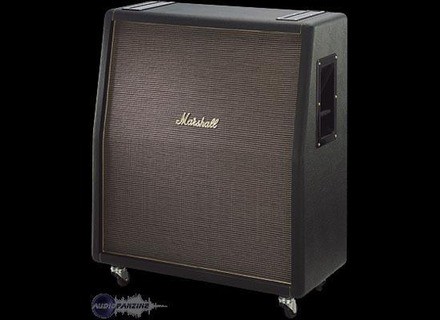 View all offers for Marshall 1960TV »

Marshall 1960TV
4
I have owned a ton of speaker cabinets in my day. I currently own 6 4x12's, 3 of them being Marshall. The 1960TV is a great cabinet. It looks amazing with it's 'blues breaker' like grille cloth and small logo. If you didn't know, the 1960TV's and 1960AX's are the Marshall cabs that come with Celestion Greenbacks. I am honestly not a huge fan of the Greenbacks for the style of music I play (heard rock/ metal), but they would sound great for classic rock. My issue with them is the 75Hz bass rolloff. Even if I am toiling in bass guitar territory below that, I would like a more extended bass response. They do have very nice mids though!

Construction wise, the cab is built as well or better than the other 1960 cabs. Actually, my TV has a plywood back panel as opposed to a particle board one, so that's a huge plus. Marshall is pretty cheap with some of the components, such as plastic handles, crappy casters, thin tolex, and plastic jack cups. Aside from that, they are pretty awesome. They tend to sound a little more loose than say a Mesa 4x12.

One thing that bugs me about the cab, is I never really heard much of the extra bass that the cab promised. Sure, it is taller, but it doesn't sound bigger or anything. To be honest, I think Marshall got the 4x12 cab size down the first time. I would, however, be interested in a TV with a straight front. That would look killer!

Overall, this is a great cab. But it really isn't that much different than the 1960's sound wise, aside form the Greenbacks. You can find 1960 cabs used for very cheap, so I really believe you are paying for the aesthetics on this one more than anything.

psychofonic's review (This content has been automatically translated from French)

Marshall 1960TV
5
A baffle trs pretty exceptional! goes well with a trs trs II triamp mK, even perfect, in fact, The definition and richness of the greenback hp are the strengths of the baffle which further possdent beautiful low trs deep thanks its height increases ... I tried in rpt 'within two weeks but hey APRS an hour compared to a mesa boogie cabinet (more screaming, aggressive and not "musical" unlike this one) I'm almost convinced In any case if you OCCAZ 'try it

damaskinos's review (This content has been automatically translated from French)

Marshall 1960TV
5
A baffle exceptional rendering clear sound quality, both in serious than in middle or acute. Issue price / quality ratio, it has no equivalent in addition. I use it with an amp head Peavey 6505 +. and I can tell you that the duo breath away! I tried several cabinet with my head (randall, mesa, marshall another) and c the only good that I returned a sound quality that really christalline bluff.
If it again I will opt for the same choice without hesitation)

JoCkEr_cyril's review (This content has been automatically translated from French)" good for clean, trs average saturation!"

Marshall 1960TV
4
I bought OCCAZ same time that Marshall JVM 410 head ... test also with a peavey 5150
in clean, it's great, it is crystalline and it sounds really good, even as crunches, for against, while I do not like the distortion, too mdiums and treble and not enough bass one is on a mesa espce antipode of ... especially with the marshall, who has a grain somewhat nasal, it makes things worse ...
In the era I knew little in amplification (not that I am now a boss away from

Did you find this review helpful?yesno
»
Read the 5 user reviews on the Marshall 1960TV »