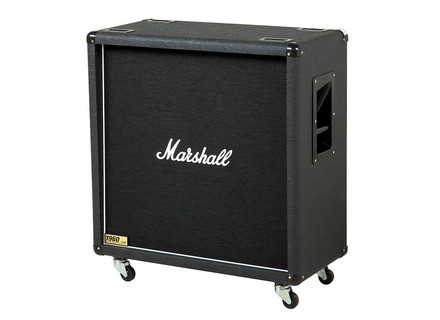 Marshall 1960B [1990-Current]
2
I acquired this can in the late nineties. I ran this can for about ten years before selling it off (more on that later). My musical stylings were varied over the years: hard rock, metal, pop, punk, rock, atmospheric...but mostly aggressive and loud. I had started playing in 1986 and had a Peavey 4x12 back then, but along the way I downsized to 1x12s. Once I got a live gig happening, I realized I really wanted to push some air. If you're able to play at loud volumes over 90dbs, a 4x12 can really make your chest rumble and your pants sway in the awesome power. I figured all my heroes had Marshall, so time to step up to the big time.
Yes, this cab really worked well for me; I played countless practices and dozens of gigs and the cab never failed me- it was a rock. As the years went on, I started seeing different companies putting out products that appeared to be higher quality (based on reviews). People spoke of the abrasive nature of the speakers in the Marshall...perhaps mine was broken in, because I really enjoyed the sound. Perhaps in hindsight it was a bit sharp sounding? This made me want to upgrade...I eventually landed Marshall AV, which sports a higher price tag and v30 speakers. I had the 2 cabs side by side for awhile. I honestly didn't hear a HUGE differnce, perhaps the v30s were a bit warmer and pleasing. Hard to really judge, since the av was a slant and this cab was straight. I enjoyed having 1 cab at home with me for recording, and 1 cab at our band's rehearsal (yeah, no more transporting!). In the end, my band blew up and I realized that I no longer needed 2 4x12s, so this standard cab was sold in order for me to keep the av.
A great feature of the cab is the ability to go mono or stereo. The mono was utilized for high volumes with 1 amp. The stereo was great for using 2 amps at the same time, creating a huge monster tone. Or, use 1 side of the stereo setup to reduce volume.
Speaking of volume, the only times I could really pound the decibals was at rehearsal. Live shows at local clubs/bars had the soundguy tell me "turn it down" to the point where the 4x12 was ridiculous; the quiet volumes could have easily been produced by a 2x12 or even 1x12. However, hard rock/metal doesn't really sound right with smaller cabs, so there is the quandry. Also, when we gigged up in New York City, I downright felt foolish bringing my 4x12 on stage- everybody had a smaller cab! It is important to note the situations you may encounter.
These days I have an oversized vertical Mesa 2x12 that sounds great. Not quite as big as a 4x12, but very close. the Mesa sound is meaner than the Aerosmith-ish tones of a Marshall, so that made it a good choice for me. Also, the 2x12 can fit right into any car's trunk, and its weight is manageable. I still have a large cab at home, but I don't see it ever leaving the home studio.
If I had to do it again, I'd probably stay away from the pricier Marshalls. As long as you find a cab that is well constructed (and plenty built better than current Marshall materials), the key is the speaker choice. I hate to give this a bad rating since it served me well, but I'm finding Marshalls are priced too high and at this point you're paying for the name.

Your mileage may vary.

Marshall 1960B [1990-Current]
4
The Marshall 1960b cabinet is the straight front 4x12 that they have been making for many years. It's a very common cab to find on stages around the world and it is widely praised for it's fantastic tone with a wide variety of different amps as well as different speakers. It has traditionally been paired with the matching 1960a angled front cabinet to create the iconic full stack that we all know and love. It has been the benchmark for 4x12 designs for a long time and until the sudden popularity of thicker sounding cabs like Mesa or Orange, this cab was used for every style of music from classic rock to thrash metal and everything in between. It sounds great with many different sets of speakers. Using Vintage 30s with this cab gives it a great midrange voice that is ideal for lead players or people after a more full sound. Conversly, using it with T75s scoops out the mids and beefs up the lows and highs to give a really radical tonality that is ideal for metal. I don't find this cab to sound as thick as a Mesa 4x12 or an Orange but it sacrifices that low end heft for a lighter weight and a slightly airier tone that is ideal for more British voiced rigs. It can do modern styles but may not have the low end that some players desire for modern tones. However ivfeel that it's a great all rounder cabinet and all inall I can see why Marshall has sold so many of these over the years. They look killer, have a reasonable weight and price, sound great and take well to a variety of different musical styles. Definitely worth a look if you need a good straight front 4x12!
Did you find this review helpful?yesno
»

The front panel is slightly slanted to the top so that the sound doesn't stay on the ground.

Good imaging. This speaker cabinet reproduces all attacks and nuances of your playing, as well as all amp setting variations. Don't stay in front of the GT12T speakers because they are very loud. Their measurement diagram shows it clearly. The cabinet is very good and provides much better vibrations than the slanted 1960A. Slanted cabinets don't look so nice and their design is an aberration for the internal vibrations. Slanted cabinets should have chambers, not the 1960A.

The 1960B can produce heavy lows that stay on the ground. Mids and highs have a higher dispersion. Thus it sounds aggressive, full and dynamic, but V30 speakers would provide better results (because of the high-frequency boost of the GT12T speakers).

I find the sound less sharp for recording applications, but that depends on many parameters.

I wouldn't buy it again because it's not the time for me to have two cabinets!

The value for money is great for a secondhand model. But with a bit more money you can buy another cabinet with V30 or G12M Greenback speakers.
Did you find this review helpful?yesno
»

elco7's review (This content has been automatically translated from French)

The speaker panel is slightly tilted up, the sound does not remain as the ground.
Good sound space, it restores the will and the game to some subtleties in the amp, especially for the settings. The gt12t, not stay and face it screams, their diagrame well also shows. But the box is very good, it vibrates around 12,976 times better than the 1960A should not play with cut sides, because it did not look more beautiful, and it's a sound aberration for internal vibrations. Real have rooms, not the 1960A.

The 1960b can do heavy bass coming from the ground, but it is the mid and high-mids that pass through. So nervous rock sound, solid and crunching, if only v30 would be better (because of the shitty boss of acute gt12t).
Recording it depends on many things, but I find it less garish.
I do not have that choice, because it is not yet time to have two!
On occase it's perfect, good budget. But with a little more money, you have to take something else in v30 or limit G12M Greenbacks.
Did you find this review helpful?yesno
»
Read the 5 user reviews on the Marshall 1960B [1990-Current] »