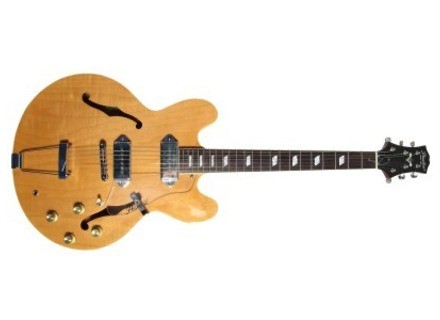 Rifififi's review (This content has been automatically translated from French)

Peerless SongBird
5
Made in Korea by a luthier who has provided many Epiphone guitars since 1970 ... and that was obviously too good to be confined to the sub-brand.

Copy of a Gibson ES 330 or the famous Epiphone Casino John Lennon from the "white album" and much of his solo career (Revolution, Get back, Do not let me down ...), this was SongBird VERY difficult to find. I bought it on ebay.co.uk hand to an Englishman who has been part of the 5 happy to be able to buy into his kingdom.

The top and back are they really veneers? Unlike the Epiphone Casino and the 330 that I had between the hands and had a clear top and back bookmatchés on this songbird, the top and back seem to be made of each piece.

Purchased with a hard case Peerless faux leather with a bit morflé during transport (the background a bit torn ... and it's not a salacious metaphor!) But remains significant insofar as the 330, 335 etc. are too big to enter ass covers standard in Warwick.

Channel neither too large nor too late, we are clearly dealing with a thought for jazz guitar ... but to experience many other uses music and outrages! It is well balanced, access to acute is that of a 330: the junction of the body to the 14th box somewhat limits the use of treble but it provides on many other points.

Without the plug, this already sounds close to a small acoustic, bass and less. But it vibrates around, it projects well and has a lot of natural sustain. Excellent agreement and it held a maker of bends which you mad Guaranteed!

The photo does not do it justice, natural finish is sublime and the table is impressive flamed beauty.

The pickups are a pure killer! I who am in search of the ultimate P90 (I have a Gibson solid body of the 1960s in comparison) and have tried almost all the microphones Pets recent ninety (Gibson 6 / 0, Seymour 7 / 10, Kluson 8 / 10 , Hepcat 6 / 10, St. Blues 8 / 10, Bare Knuckle 2 / 10, Lindy Fralin 6 / 10, Epiphone 1 / 10), I was really struck by the quality of the microphones SongBird. It sends a terrible level as in the old Gibson, itches and it will scuff the lamps of the amp when you attack, is crystalline when playing with fingers, compress just right when you drop a little volume, a dynamics of madness, not too loud and seems to have already lived-in my opinion, it takes 30 years of oxidation and degaussing for a P90 starts ringing there-balanced bass, midrange and not too much tweeter.

The microphone is super serious jazz and sounds like a wide band, almost acoustic in mind. It has really been thought of as in the 1950s: the level of horse, so use the volume to 6 or 7 for a sound and clear but this round. In the 60's and 70's it was used more thoroughly to get the natural saturation of the amplifier. Here, there is a real woman tone and sustain. Wrong side, it goes obviously Feedback (no inner beam), but we find the same concern about Gibson 330 to six times the price of this SongBird! I'll look into a solution with a luthier to solve this problem of feedback.

The microphone is more acute jazz-country and very rock n roll! Unlike many of P90 that I know who are screaming, it sounds more incisive and piercing as this. In full, it is typically the rhythmic sound of the Revolution or the solo on "Get Back. He leaves a little less serious than the feedback (it is mainly the low frequencies that seem to vibrate the table).

The middle position is somewhat skewed by the high level of micro serious, just lower it to regain its balance in this phase (not phase out as usual) microphones.

In comparison with all the 330 I've tried this at a price SongBird modest (but still difficult to find) is to shame and an Epiphone Casino holds a candle to her big sister from Gibson. This is an excellent guitar for jazz, blues, bluegrass, pop and rock. The finishes are superb, vintage sounds.

As soon as I find another, I re jumping at the chance!

See all 26 photos of Peerless SongBird »