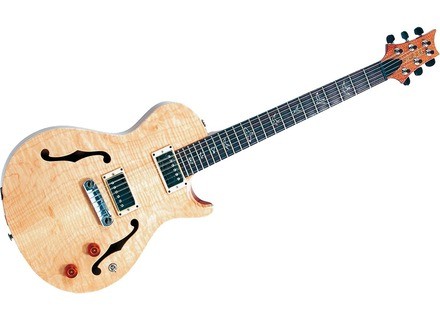 tjon901's review"PRS electric that can get some good acoustic tones"

PRS Singlecut Hollowbody I
4
PRS is one of the highest quality American guitar makers still around. They have many high level users and players around the world appreciate their attention to detail and quality. This guitar is a hollowbody example of their popular single cut design. The neck is the standard PRS scale of 25 inches and has 22 frets. This gives a good balance between that of the Gibson and Fender scales. This model has the PRS wide/fat neck which is nice and wide and between a 50s Gibson neck and a 60s Gibson neck. The fretboard is made from rosewood and has PRS's signature bird inlays. The body is made from a mahogany back and side with a mahogany top. You can get a flamed maple top as an option. I use to dislike the bridges RPS used because of their lack of adjustability but now they have fully adjustable one piece stop tail bridges which are very nice but take some getting use to if you are use to a tune-o-matic setup. My model had the option Piezo system. It has PRS humbuckers in the neck and bridge along with the Piezo system build into the bridge. The controls are a volume and tone control and a 3 way toggle switch along with a mini switch and knob for the Piezo. The piezo mini switch selects between all piezo, no piezo and a blend of piezo and the knob for the piezo controls the stauration of the blend. There are two outputs on the guitar one for a blend of the electric signal and the piezo and one just for the Piezo.

PRS guitars play deceptively well. When you look at them on surface it is hard to imagine that this guitar can play as well as a shred guitar like a Jackson or ESP something that was build just for good playability but PRS manages to do it. Because of the hollowbody construction the guitar is very light but feels light without feeling flimsy. The neck fills your hand but is not too big. Even with the light body and big neck the guitar is not very neck heavy. The fully adjustable bridge is a welcome change from the bridges PRS use to use where they were set in their design. The single cut design means upper fret playability isnt the best but it is okay. PRS guitars normally have a big neck joint heel and this is no exception.

You can get great Jazz tones from this guitar. It is not noisy at all so you can do high gain stuff with it too. The Piezo system adds even more versatility to the tone on this already very versatile guitar. With the piezo blend knob you can really manipulate your sound very nicely. Adding a bit of acoustic tone can thicken up and add clarity to your tone. The Piezo by itself on its own output does not sound very good. You will need some light effects to get a good acoustic sound out of the Piezo output. This guitar can do super high gain but it is not meant for it. This guitar is great for a Jazzy or bluesy tone. The tone you get will have an extra bit of a woody sound due to the hollow body. Remember this is a fully hollowbody not a semi-hollow with a tone block down the middle.

This guitar is good if you are looking for a high quality American made hollow body electric that comes with a decent Piezo system. If you are a creative guitar player looking for new sounds too add to your pallet this guitar is also good. Bending the Piezo sound with your normal electric sound can get you new unique tones that you would normally need a studio to produce. If you are looking for a versatile hollowbody and dont mind paying the price the this PRS model is probably the best thing out there.

See all 7 photos of PRS Singlecut Hollowbody I »