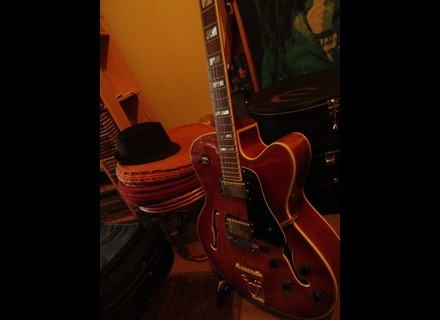 I paid $500.00, got a hardshell case and a Guitar Strap but then the year was 1998 and as I mentioned above I purchased it at Jimmy Rogers Music company in Seneca, South Carolina.

Sorry, but there is nothing that I dislike about this guitar. I did have to replace the 3-way toggle switch, but it was my fault not the Guitar construction.

I have owned this Guitar for 10 years and it looks and plays as good as it did when I purchased it.

I doubt these are made with the Actual Samick Name on the headstock at the present, so it will be come a collector's item in the days to come. I was told by the owner of Jimmy Roger's Music company that this would be the last Guitar made with Samick Artist Model on the headstock.

Samick HF 650
5
I do alot of traveling in my profession. I walked into a music store in a small Wyoming town in the window was a "copy" of my late friends deep hollow body jazz box. I was very interested in this guitar, at first just because it looked like my buddy's. (He has been gone for a long time, He taught me a lot of guitar and he played with a little band called Bob Wills and the texas playboys.)After playing this guitar for a few minutes in the store I realized the true quality of this instrument. The gentleman at the store told me the "samick storie" to make a long storie short I took it home. I own many "name brand" guitars and in my opinion this samick is right up there with them. In sound and quality. I will consider samicks in the future as a guitar to take seriously. I think I paid around $750 and have never regreted this purchase.

I have played my buddy's epiphone quite a bit. Let me qualify this by saying he bought his guitar in 1959 when epiphones were really epiphones. The action on this samick is better and the sound is very comparable. It has pretty hot humbuckers when I play clean i turn them to about 5. This guitar is not ultra sensitive to feedback for a hollow body guitar. This guitar turns heads with its good looks. All maple with an ivory like binding and rectangular pearloid inlays.

I realize what this guitar is and what it is supposed to do and I don't have any complaints at all. It is basicaly a jazz and swing box. If I want to play Hendrix I grab the strat. If it were a perfect world
i would like for the grain on the maple to be tighter. This is a common problem in todays world with any guitar.

They went though the trouble to bind the f holes and I can't find any flaws in the finish. The quality is fine for a medium priced guitar. I realized a few years ago that I didn't really need top of the line guitars as my professional playing days are over and I play strictly for my own pleasure. This guitar is very durable in any normal setting (Live or Recording). It is one that allways travels with me.

If you are not into headstock envy. ( I was guilty of that for many years until I grew up.) If you want a very funtional good sounding guitar at a reasonable price. Consider Samick. These guitars vary greatly in quality and I would play the model that I was interested in before buying. But when you get a good one, you will probably enjoy it for years to come.