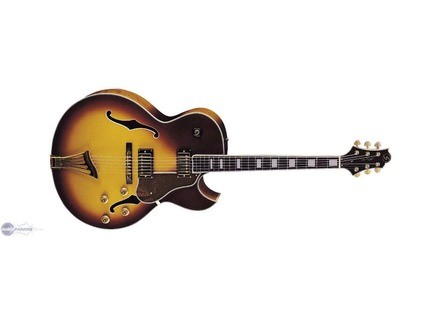 Samick La Salle JZ3
4
I bought this guitar over the net from Jeff Hale for $750, which included George Benson strings and all shipping (no tax), as well as a once over by Hale to clean it up. My local music shop had a Samick JZ2, but I hated the mustard color and wanted the cooler looking JZ3, which they couldn't get for months, they said

Although it's made in Taiwan, it delivers a warm sound and the fret board is easy on the hands. It's a Gibson wannabe in a big way, and I think of it as a poor-man's L5. There's ease in playing jazz on it because of its tone and action, and the semi-hollow body lets you work out ideas without plugging in.

At first I thought this was a cheap piece of junk. There was a sticky barcode label on the pickguard, which drove me nuts geting it off, and I found the pots cheap and flimsy. I also found a little scratch at where the neck meets the body, and wondered how it got there. "Made in Taiwan" also is planted on the body, which kept reminding me I bought garbage. But then I broke it in, I guess, and after playing it for a few weeks, I really liked it. It was easy to play, had a great warm tone, and the body was pretty solid.

I like the finish on it and the cutaway and inlays, even though I know the inlays are probably just plastic. The body is laminated, which is kind of like having a big slipcover on your guitar like you would on a sofa or chair. But I don't mind it. It works.

If you're not too fussy and don't have thousands to spend on a vintage Gibson or even a new one, go for the Samick JZ3. It will get the job done for you, and you might even grow to like it a lot and not think so much about the high-priced number you passed by.