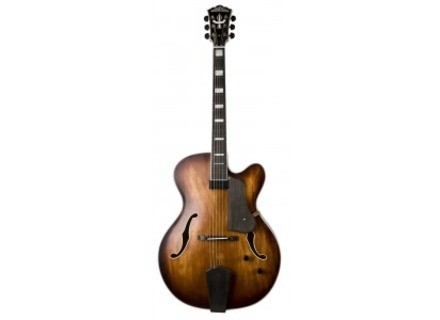 View all offers for Washburn J600 »

m4rc1's review"Ideal for those who wants to tune it up themselves."

The feeling is great, the string height is as good on a electric guitar (Godin, fender, etc...) The instrument seems build solid but not with a great second pass on finish. I mean the esthetic is good but there are MANY rough cut. It still look pretty awesome, the finish is overall good. But visually there are mistakes ...

There are some very nice details, inlay in the fret board, nice C shaped neck, very thight neck too, easy to play ...

You want to try with a brand new string set, I tried only a Jazz String Set 12-52 and it unveil a deepness that was missing before with the former string

The access to the entire fretboard is nice, I raise the bass strings only few millimeters to eliminate buzz effect and there you go.

The fretboard is missing a bit of polish, if you like to bend strings a lot you gonna notice it right away. Its rough and gave a scratching effect. Maybe a little polish on the fret too. I wanna try flat wound strings before I could tell more.

Its also very easy to get a nice rich sound. The response is good.

Don't be afraid the acoustic is still pretty good.

The Tone control is almost ineffective, though the sound is warm and deep. I would change it for a linear pot, i believe it's a very bad logarithmic one. (the area between the level 0 through about 2 is the most range of the pot, the rest of the graduation changes only 10% in comparison to the 90% between 0-2).

The acoustic sound is very good, though I would enjoy a little warmer sound. But again a string set would make A HUGE difference there.

Its warm, a lot of natural harmonics, the wood will sings along.

I'll blend here sound with A LOT of effect to know really the pickup is responsive... I bought it to get more pounding and deep to my sound, the acoustic of this instrument will help me a lot. I expect a Jack Whiteish sound, tom morello, Led Zeppelin, Yes, Yardbirds, etc... out of this. I would believe i'll get nearer from what I could obtain with my Godin LGT.

There are still many adjustement I wanna make on this beauty (she's still pretty good looking you know). But in general I think you got a nice piece of instrument that needs a bit (or a lot, depends on your skills) of tuning. The fretboard, the keys, string replacements, bridge positioning, even the saddles could use a bit of sanding.

I would say for a first Jazz Electro-Acoustic it's pretty awesome what you got here ! But for a professionnal High End gear, I might say it's not suitable. I guess this instrument is good for recording, praticing (and it's good looking on stage). But don't expect to build a career around it.

For 700-800$ its a deal, but honestly I would hope for that kind of finish on a 500$ instrument more than what I paid. Find it used or in rebate. It still worth a try. Maybe I should try few others before to get this one. But I was charmed by its good looking ...

try it with new strings ... ask the retailer, for a 800$ guitar they can make some effort for your bucks