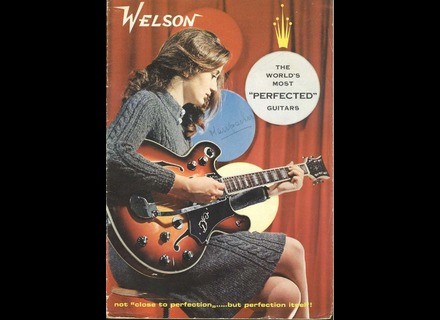 Mike Chamann's review (This content has been automatically translated from French)" This Italian rivals the "legends" U.S."

Welson Golden Arrow stereo
4
Made in Italy (in the vein of Crucianelli, Eko, Vox etc ...)
This is the high end of the series of 335 produced by Welson.
One of the first since the serial number is 108
(Almost invisible on the edge of the handle in front of microphone)
It appears in the catalog from 1969 showing this page.
Its 3/4 body is actually a little larger than the + Gibson.
The fixed bridge, adapted to the game of vibrato, has three small rolls to streaks handy for adjusting the distance between the strings and each string height and intonation.
The handle, attached by four screws, is narrow and flat. The fingerboard is rosewood with pearl inlays and binding, the back of maple neck with a double walnut edging reminds me Rickenbacker ... (And sound!)

Electronics requires a stereo cable ending in a sling: a microphone on each channel as required and is available in mono (rotary)

The settings are numerous with this feature can disengage position to return to WILD direct sound without the corrections.

The handle is nice although I prefer + to form some broad agreements and the fingers play the right hand.
The box is rather small (compared to my Lucille with its central beam!)

I try to remain objective because this guitar was a childhood dream: I had this famous catalog at a time when I squinted + on the guitar on the girl ...
I was lucky to find one (guitar) in an almost new condition (see pictures), varnishes flawless, gleaming chrome and with its full original vibrato that works! which is rare on vintage. It even has the cover engraved chrome Chavalet Welson.

In terms of sounds, again a lot of subjectivity.
But among the many quality guitars that I play is pretty unique.
The acoustics of the violin, his aging have much to do.
For crystalline sounds, precise and defined it excels!
Near the Strat but with more wooden. I would do it again the parallel with Ric (the twang, sustain, and the stereo: great in the studio)
For Blues and Jazz sounds, the neck pickup is the case especially as the tone control does not lower the level.
When I bought it, it was equipped with ropes and nets flat on his Jazzy was the rendezvous.

Finally I would like to emphasize the quality of these Italian guitars.
I foolishly sold a stereo to Crucianelli Elite (I listen to his recordings of rhythmic blues-rock with a grain of approaching an old P90 125 to 57!)
I also have another Welson, the Gold Sparkle, which sounds phenomenal!
It holds the road ... even behind a Gretsch 6120 64 or an old Telecaster.
History to put the record straight ...

THE -:
not fret 0
Mechanical single-hood, imprecise
but take the agreement to vibrato
Rotary selectors do not allow rapid changes.