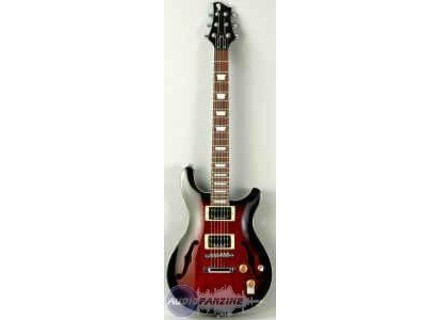 jmp18's review (This content has been automatically translated from French)

Comfortable handle (sold with a set of extra light strings: Thurs Inconvnient comfort advantage: it must be because we play prcis very easy false).
Given the built-in microphones, it is ncessaire to have a good amp: a ring would be a shame such a scratch on the amp pourrave 20Watt! A nice little marshall 80watts begins to give a good apperu of bte. A reliable level of tuning.
Use the home and live without worries.

Trs a versatile guitar for blues prdilection sonotits both for its warm and powerful. Excellent sustain (neck al. I did not default to not important.

I use it happily for a year. I first cracked on its looks. I apprci the comfortable handle for me who do not like to hurt my little finger. Ct sound, trs is clean, nothing wrong. I jou on Aria, Cort, Epiphone, Ibanez ... The whale is my prfre. With the exprience I would therefore again the same choice as lead guitar. (Unless j'tais trs rich and I could buy some high-end MODELS Line 6 oula PRS Standard ST22!)
Did you find this review helpful?yesno
»

Zul's review (This content has been automatically translated from French)

Whale Wine Whalebone
5
Well everything has already been said, to convince you just go to the website of the brand: http://www.whaleguitars.com/
Mine is blue, beautiful, it looks like a small PRS, I admit it&#39;s a bit for this reason that I bought, but I still tried other in-store, Cort & Co, but it is the Whalebone who seduced me.

The only thing that saddens me is that the varnish is too dark to really honor the wood grain, whether for the table, the head (also flamed maple), or the rest of the body, including back of the neck. As I like the beautiful wood, I think to redo the satin finish, still blue, but lighter.

http://inmemorium.free.fr/autres/Whale2.jpg
Note that the varnish on picture seems much clearer in situ.

I put 9 for this point, the rest it&#39;s all good in this price range, even my luthier was surprised by the quality of the guitar, yet he is picky!

The handle is well in hand, qiue either academic position or thumbs up, it is quite thick but not too much, it&#39;s a bit subjective in my case, my other Ibanez RG is a scratch, so rather end in comparison. I do not have too many other comparisons lead to 2-3 by scratch: the sleeves are thicker on TV Squier, Peavey Wolfgang and Godin SD. Finally a check for the last two, but it should play in the same waters.
If this is not a boulevard style for RG shreddeurs short of sensations, we can tumble without problems!

For access to acute, my hand naturally stops (major G string) around the 21-22nd box, so just lay a finger chouille, which occurs naturally, so no worries on that side especially cde there. Compared to my RG j&#39;arive naturally on the 23-24th.

The Whalebone is very light, hollow body helping, it is fairly well balanced, but the abscence of chamfers bother me a bit in terms of stability and comfort at the coast (and no I do not play the guitar on the c *** Lles), compared to the RG forever.

If only one of ale too rotten stuff behind, there&#39;s no reason to the galleys for a good sound, this guitar has no particular defect.

9 again for the inconvenience caused by the abscence of muzzle, but it is not specific to the Whale That said, it&#39;s just a story of a guitar.

The right sound. Well here&#39;s an area that is wickedly subjective anyway!
I am only a branch POD2, direction and monitoring studio console Yamaha 01V with the subwoofer via a tube preamp output of the POD.
In bypass the POD sounds (so clear) are to die, very round and warm, very jazz in the neck position, while rock bridge, and the intermediate positions with or without microphones Plit open almost all walks of life, basically round of the slam, there&#39;s way!
Dug and the body provides its cloration a small "forest" not bad! I plan to mount even a bridge with piezo, I&#39;m curious to hear the result!
Sound dry sounds very balanced, with less power than the equivalent model of Cort in my memory (M800).

With distortion, good ben the Duncan SH2 and SH4, make no mistake, this is not window dressing! Jazz, Blues, Rock Hard rock, Heavy and their derivatives, is designed for!
Since the violin is largely the road behind, no surprise at that level.
All sounds are possible, I remind you that there are six possible configurations of microphones with the splits, not to mention the volume controls and tone!
For the big Metal should perhaps do with more powerful pickups, I plan to test the Dimarzio Evo2 Breed and I intended to my RG to see the result.

Versatility is the key word for this section!

It&#39;s been roughly a year since I have, I tested two three only scratch before, I simply flashed in the face and features, I do not think that buying a guitar can be cold and objective ! That said, I compared a minimum before and had it sounded like a shovel I had my way, sobbing! : OD

For the price it is a real opportunity! Do not hesitate a moment!
It is certainly not comparable to guitars that are worth more than 2 or 3 times the price, I have also not compared, but frankly I do not see what to ask for more, mouth, quality sounds, everything is frankly much more than acceptable, I would not say exceptional, because there&#39;s no this in my rating scale! O)

If I would do this choice, do you think Ben&#39;s just that I have for sale brouzoufs to restore my RG in a state, she lived it the poor, well, finally I keep my Whale! It will take longer for the RG, but upon reflection I said I certainly regret my little blue ...

There I put my 10 because it failed me even before party!
Did you find this review helpful?yesno
»

hottevart.valery's review (This content has been automatically translated from French)

Channel trs enjoyable and comfortable.
The guitar is not too heavy which is good for my back ...
Splitable microphones offer sound pallete trs Varis ...
Little difference anyway between the middle position and severe (at least in non Splitt

I play everything and also ... It's perfect ...
I have a Valvestate 2000 15w Peavey and a lil and nothing to say in every case rings true. The sound is round, like I love her and sustain is amazing

I have a year and I was looking for a versatile guitar. Mi mi strat Gibson ...
I would do without this purchase problem because for a 660 guitar with Seymour Duncan quip splittable microphone is perfect for versatility ... and the look is more beautiful
Did you find this review helpful?yesno
»

Bertrand C's review (This content has been automatically translated from French)

Whale Wine Whalebone
5
Detailed in other reviews, I will not m'apesantir its characteristics; mine, I have for ten days, is Burgundy Wine. Its look is axceptionnel and recalls violently Maton semi-hollow played Jesse Hughues (Eagles of Death Metal) and he attributes to his friend volonotiers Josh Homme (QTSA) - perhaps a little why I l 'I bought it too (Seymour Duncan H4 as the Maton), because I'm a fan of the sound man (he uses a guitar) - Excellent finishing lpus is what makes it even better. Balanced handle and easy to play, especially in the treble.
Sounds: all according to the settings but we will return

Much lighter than my Gisbon Studio (about 2 pounds less) and more enjoyable to play (much less hardy) - I know it hurts to say beyond a Korean, but let's goals (especially me) and does voiloons face it: this guitar is amazing quality of play

I play heavy rock / punk with, usually, a combination Studio Gibson / Marshall 150W lamps, but as I said I like the sound QOTSA, and then like many other guitar sounds, many clearer and clear, difficult to obtain with Gibson (objectively not made for that) - well with the Whalebone, everything is there:
The Seymour Duncan bridge (H4?), In combination or not with the SD handle (H2?) Sounds exceptionally well in the big sounds, much less crunchy than Gibson, warmer, more sustain as well, semi-hollow body helping.
The SH2 handle has extremely sound and airy jazz.
Splitter (split by micro push-pull on the two pickups together and it is a shame), the pickups are a Fender undeniable dimension
So it's a huge range that can be obtained with three adjustment positions of the microphones and the split of these (6 configurations, therefore, very different from each other)
Obviously micro SD (US origin, not a copy) make a difference (alone, nearly € 200 for a skyscraper at 645 ...)

We must ignore the brand, not very romantic, once past the general snobbery is to say that connement play on a Korean brand of the distributor is anti rock at will (this may be true but I do not care), we can objectively play a guitar from a strictly exceptional value for money, a rare quality, flawless finish, all for the price of € 645 (it could be worth 1500 and it does is not really surprising)
Moreover it is delivered in flight case (well made), with a good big padded leather strap, an extra set of strings (brand Whale) and a jack (shit) that will troubleshoot maybe one day.
Go try it
It is very

Did you find this review helpful?yesno
»
Read the 7 user reviews on the Whale Wine Whalebone »