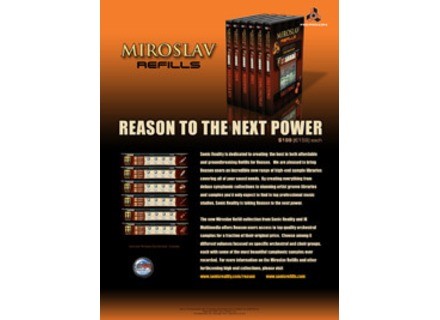 Miroslav Vitous GOLD BUNDLE for REASON 3
3
I've been a fan of Reason since the very 1st version that was released... Since I've been using reason I’ve come across a lot of different refills and sound packs. For those of you that don't know what a refill is just look at it as a sound pack coded in a special format that only reason can access..

Often you will hear people complaining about Reason not supporting vsts/plugins well they don't need to. Vsts (most of them are extra sounds) think of a Refill as a vst for Reason... OK now lets get on to the review of this product shall we?

I'd have to say the best thing about this refill is it comes programmed for the Reason's combinator (that's a big thing). Most combinator patches have a bunch of extra tweaks added to the sound for example.

These are things you will find programmed on sounds in a workstation such as the Triton or the motif etc. Another thing I like is this refill contains a lot of sounds that you can choose from.

What I don't like is the recording of the instruments. Some of them are really good some of them are really bad. I remember holding the keys down on a few patches and I could hear people talking in the background of the string recordings. I could also hear bad loop points, so I had to go in and manually edit them.. I'm not trying to be picky but when you pay $200.00 for a sound library you expect it to function correctly. On the plus side there are a lot of performance articulations that you can control such as:

Just naming a few there are others of course but I felt those were good ones to mention.. I personally don't think this product is worth the price tag of $240. I'd push the product on people If it were closer to $100.00.

darsanha's review (This content has been automatically translated from French)

Miroslav Vitous GOLD BUNDLE for REASON 3
5
Vienda I receive and test the Gold Bundle and frankly it all just excellent! sounds of a very great quality ... nothing to say!
Did you find this review helpful?yesno
»

Other categories in Studio & Home Studio