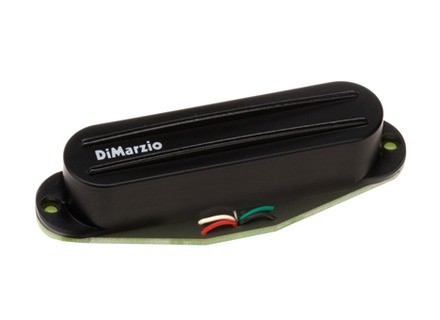 DiMarzio DP187 The Cruiser Bridge
5
The Cruiser was introduced in the early 90s and was one of the first single coil sized humbucker replacement pickups. The whole idea was to have a humbucking pickup that was totally quiet in the size of a Stratocaster single coil but also still sounded like a Stratocaster single coil. This pickup has 4 conductor wiring and a ceramic magnet. The output is only 5.75k so it has a very vintage and single coil like feel to it. This pickup gets pretty close to that. Its slightly hotter than a normal single coil so you get closer to the hot rodded single coil sound. Since it is really a humbucker at heart it is slightly fatter in some frequencies than a true single coil would be. Dimarzio graphs the EQ as this; 8.0 on the treble end with a 4.5 in the mids and a 5.5 in the bass frequncies. They tried to EQ it to get more of a single coil sound but some of the fattness comes out subtly. Since this pickup is EQ'ed slightly brighter to get a more single coil like sound it goes better in guitars with a The lower strings have more beef to them than they would have with a true single coil pickups. This is a pretty nice trade off for not getting the exact single coil sound. Low end grunt is something that pretty much all single coil guitar lack and I dont know anyone who plays single coils that would not want more low end beef in their sound. With the rail pickup there is less string pull than with the normal single coil magnets. This means you will get less magnetic drag on the strings. With magnetic drag the magnets pull on the strings and lessen your sustain. If you love that single coil sound but cant stand the noise the best way to get rid of it is to install one of these single coil sized humbuckers in your guitar.
Did you find this review helpful?yesno
»

DiMarzio DP187 The Cruiser Bridge
4
The Cruiser Bridge was a pickup invented by DiMarzio to meet the needs of more modern strat players. It’s a take on today’s technology with yesterday’s tone. They wanted to create a hum canceling blade humbucker that sounded similar to a real single coil-ish P90-ish pickup. Like all DiMarzio pickups, this includes four conductor wiring. This also has a ceramic magnet inside of it instead of an Alnico.

The Cruiser Bridge is a pickup that’s made for people looking for that single coil or P90 kinda sound but without the hum. It’s hotter than a normal single coil, and the wound strings are a bit fatter, but it still retains that signature quality that so many people love from single coils. Andy Timmons is probably the most famous user of this pickup. If you’ve heard his solo stuff, you’ve almost undoubtedly heard this pickup in action.

The Cruiser Bridge has a fairly bright EQ curve since it’s geared towards a single coil sound, so it’s better in woods like mahogany, basswood or a neutral sounding alder. This helps the pickup work with the woods rather than accentuating unwanted frequencies, particularly in the high end. The split tones sound very nice, and when it’s in parallel, it almost has a telecaster kinda sound going on. The cool thing about this pickup is that the treble strings still retain their bite just like a normal single coil. The added output also aids in sustain. It has enough output where it sounds fat but doesn’t sound overly compressed like a lot of higher output pickups. The output is very much a medium output.

If you’re looking for a hum canceling pickup that sounds similar to those classic single coil or P90 tones, this is the pickup for you. If it’s too bright, try adding a 250k pot to your guitar. If it sounds like it’s not getting enough output, see if the 500k pot works best for you.

See all 15 photos of DiMarzio DP187 The Cruiser Bridge »