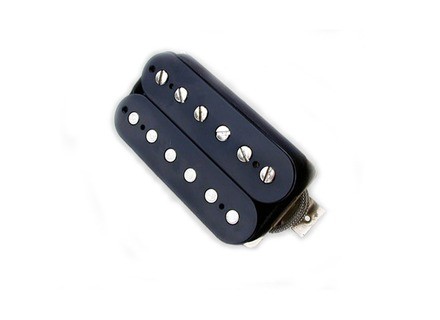 Bare Knuckle Pickups Stormy Monday
5
Micro handmade in England Will the 57 most consistent with the PAF, with its Alnico II magnet (unlike The Mule, Alnico IV).
I have a Les Paul 3 of 79: two bridge, one neck. They were installed by the previous owner, a maker: I have the guitar for 2 years and am considering changing the pickups for versatility, although I'm afraid of regret ... For jazz, blues and rock'n'roll, it's a great kit. For the metal, there's more! I tested a SD Distortion on the same guitar and a DiMarzio Virtual Hot PAF: the BKP has a clapping supllémentaire, less bass and more treble. I never played on a real Les Paul 59, but I guess it would sound like that!

In series (old wiring of my guitar), the sound is huge, very hot: it sounds AC / DC without pushing the attack and gain more flexibility allows you to find a CRUCH quite enjoyable.

Alone or in parrallèles, these pickups give her a typical PAF. In general, they make better with a tube amp (or a simulation, like on my BOSS GT-5), especially by pushing the volume and allowing an average gain. Providing a distortion pedal or overdrive sounds atteidre allows more fat without losing too much grain. A modern amp with a gain in depth has no interest with these pickups: they are crushed by the gain and lose all identity.

The bridge pickup is very slamming and precise: it returns every subtlety of the game, especially the attacks. In crunch, it can sound BBKing on a Les Paul ... This is impressonanant! Even for the funck, it can be great, if you play well! Finally with a wah wah, in any position, it sounds good: this is the first time I see it. A tone is essential to play in a group: 10, the spring always mix scratching and must be reduced to four to let another solo voice or switch to the neck pickup. Distortion in the microwave loses some of its typical fate and correct a distortion, type PAF with a little less bass than a Seymour Duncan or Dimarzio.
Mounted on a knob of 250k, it's less smacking and softer without losing treble.

The neck pickup is, as always, more rounded. He cepandant a rich grain and it is very hot: solo blues, I never know which one to choose! For an intro to Sweet Child O'Mine, it works very well also.

In summary, if you want sound like Slash on Appetite, as you can but the price is worth, in my opinion, not worth it. An SD or Dimarzio are both cheaper and distortion (except perhaps if you suffer from low too high as on my old LP, and even if you do not play that distortion, it's the mess .. .).
Its kind for Page Led Zeppelin I, it may be worthwhile to think about but according to some videos on the net, the DiMarzio Has a can do the trick ...
However, if you play in crunch or clean sound and you are looking for that typical sound of Gibsons 59, then go for it! It is expensive but it's great. It is always cheaper than the real vintage and it vieilira probably fine, because it is done the old way.
On a semi-hollow I would not hesitate. Besides if someone wants to give an ES-335, even at Epiphone, would solve my issues well

Bare Knuckle Pickups Stormy Monday
4
I have mounted an LP of very good at violin, a Bacchus Duke Standard.
I was looking for microphones moderate output level, so rather make my crunch of the guitar amp microphones.
After discussion with Tim BKP on styles that I play now (Slash, Led Zep, Aerosmith, Bonamassa, ZZ Top), we came to a choice Stormy Monday or Mules. They are Alnico II, I opted for the latter.
I was looking for a clean but better defined as warm as the Seymour Duncan Alnico II Pro Slash, but its also a round crunch, especially on the micro Lead, and a good bridge dynamic and punchy.
Clean side note, it's nickel, very slender and the humbuckers are fun to clean. In overdrive, I found that they lacked a little side Salasse that task a little, it was also very fine, almost too clean for a rock sound.
So these are very good microphones, high-flying, very well defined, but may be too clean for rock, I am a bit harsh in my note, but they do not fit me perfectly. I read an opinion on the Mules will also in this sense: it would be the hallmark of Bare Knuckle?

lj35's review (This content has been automatically translated from French)" Definition and dynamic!"

Bare Knuckle Pickups Stormy Monday
5
Very good microphones, mounted on a hollow body Gibson.
Its very defined, big dynamically.
The crunch or distos are clear and powerful, without being greasy or slimy.
In clear sounds, it's going to jazz, funk to rockabilly.
In short, if your guitar is worth it and want the vitamins, these pickups are for you.