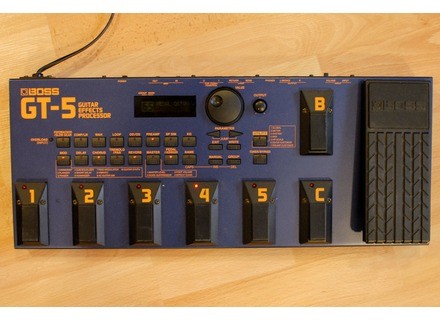 GT-5, Multi-Effects for Electric Guitar from Boss in the GT series.

Product replaced by the Boss GT-100.

Boss GT-5
5
I got my boss GT-5 in thoma okaze, down in Ghent (Belgium). I was looking for a multi effect processor and this one was a second handed one for only 325.

Well if you have the right combination you can have the most clean sounds ever, without any zooming on the background. The offering of pre-programmed sounds is huge and a lot of fun. You can have everything from a funky sound to the perfect imitation of a Marshall 1959 head with a slight OD. I really like those old rock overdrives and distortions and there are a lot of them too! You won't have to worry the sounds won't fit you, there will some you don't like, but most are very decent.
It also has a very nice tuner. You can find almost every function of the little pedals packed and stacked in this one.

Well sometimes the thing jams (very rarely though) and i haven't figured out yet why
Also when you buy this kind of thing second handed, please ask if they still have the manual, or else it won't be easy.

I think every pedal that boss had ever made is very solid, you can't even break the 'lil ones and especially not the GT-5

If you like effects and freaky sounds, this one has got it all, also for the old rock 'n rollers : the "Jimmy Hendrix" sound and the "Beatle" sound is on it too.

Boss GT-5
5
Bought this unit at Guitar Center in Covina, Calif. I first played through one at band
practice, after the bass player's brother brought it over to try it out. I had to have one.
I paid the full $600.

The versatility was beyond my expectations. Some may complain about the unit
not being capable of warm, true tube-like tones, but for me, it had all the sound and
responsiveness I could have wanted. The JC-120 preset was almost perfect. Great
swirling chorus tone. Throw single-effect pedals into the effects loop, and you can
dial up any tone you can, or even, can't imagine. Everyone in our band loves the thing.
Line it straight into the mixer, and you're good to go. Even the acoustic simulator
seems to sound pretty good, since most of those units are hopeless to my ears.

Editing the presets can become cumbersome. Keep the manual. You will need it.
Navigating through all the buttons can get tedious and might start to get
confusing. I have never tried the MIDI features, so I don't know how that would work.
Figuring out how to set the wah pedal to to it's job was difficult, if not impossible
in some cases.

All-metal chassis has stood up to my stomping, which is a good thing since I weigh
about 300 lbs. The input level pot needs to be cleaned or replaced, since it has
developed a few dropout spots. Still, an easy repair.

I have'nt gone through all the presets yet, so I am still unaware of all it's sonic
capabilities. So far the unit has performed admirably. I have used it to record a few
demos, and no one has mentioned any flaws in the guitar's tone or sound.

Boss GT-5
4
Bought for $400 used to replace my less-than-adequete digitech rp-12. In particular I wanted better light overdrive sounds and better quality effects than the rp-12 could give

External effects loop! I can throw whatever pedal I want into the effects chain.

Programable effects order - add delays before distortion if you want, wah after distortion, etc ... any effect can be put
wherever.

Boss also gives you a lot of flexibility with the EQ ... EQ settings are found in the amp simultar effect, in place of a modulation effect and as a global effect ... all very useful for what they were intended for (emulating an amp sound, sculpting the sound, and compensating for you amp/PA set up).

They also gave a lot of different phaser sounds, but since I'm not a phaser guy I can't really comment on how useable they all are.

Another appreciated addition is a trim knob next to the guitar input ... so I apply a hot signal from a mixer, or various guitar instrument levels without adjusting effects volumes.


Lots of gimmick effects like ring modulation that over 99% of the people who buy this will never use. Also the wah is *very* weak - it has no 'roundness' to it at all, it just sounds very dead.

The preamp/amp simulator is very bad by today's standards as well... you can't get crunchy metal sounds, warm tube amp sounds, or much useful in between. What you can get are very sterile, solid state sounding distortions ... think Boston.

They left out a 6 or 8 voice chorus too, so I have to stick my old boss chorus ensemble pedal in the fx loop

The case is metal, and seems pretty rugged. The pedals also feel like they're not going anywhere.

If you don't use lots of wah, and you already have a nice sounding amp this should give all the effects and flexibility you will need. But if you're like me (playing through small practice amps and PA systems), this will not give nice organic tube-ish guitar sounds.

Judas's review (This content has been automatically translated from French)

Boss GT-5
4
Pdalier floor with expression pedals intgre. Many effects (feedback, compressor, simulators and speaker amplifiers, distos, chorus, flanger .... in short the total). Possibility to connect to the south of pc for transfers (in sense 2). Very practical to store a large number of rglages download on internet or CRER a backup presets without breaking the head.

Simple enough rgler (there are for each pRSET effects, and helps in the beginning). however, is more tedious to look for his trs prcis (some rglages range from a value of 0 in 1800, and can increase only incremented by 1, which is quite tiring). But the manual is clear trs, and is responsible for many of the effects of each dcrire rglage on his gnral. A good point!

My guitar is a Cort X2 (who said that the guitars sounded bad balls in 2000? The comfort of the game is certainly less than the guitars more expensive, but it is well dj trs), and I place in a rack amp (Marshall 8008) and a Hiwatt 4x12 cabinet (SE4123). The amp simulations ragissent like real amps: turning down the volume knob, you get crunchy sounds wish (Hendrix, SRV ...). But Fast Fashion distos of the most violent possible, even if the saturation trs trs modern savages are Submitted, but there are ways to approach it without flinching. The only weak point is that the sound with headphones trs fuzzy (but it is not intended for use headphones). The distos sound good, but I see myself all the time forced HP to enable the simulator, otherwise the sound quickly becomes dirty trs. I told him just adding a V-amp 2 for simulation models, and it is a duo from hell. A good place also for the chain of effects, where one can manipulate the order of desire in the effects loop. Once you know how to use, you can have the sound which rve.

I use it for 1 year dj and I test many pdaliers rcents (Boss GT6, GNX3 ...) and it does not weaken. The Wha wha trsraliste has a grain, and only the type of distortions mtal have a quality of its limit. For nothing wrong against its clean. a Russianness!
Did you find this review helpful?yesno
»
Read the 10 user reviews on the Boss GT-5 »

Boss GT-5 manuals and other files