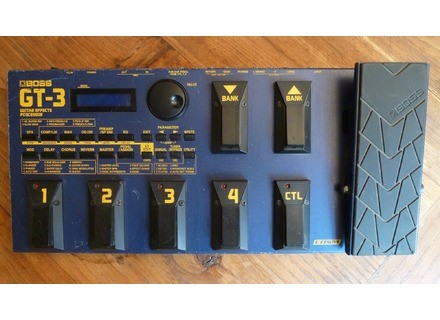 GT-3, Multi-Effects for Electric Guitar from Boss in the GT series.

Product replaced by the Boss GT-100.

Boss GT-3
5
Why on God's green earth would I be reviewing a product released almost 15 years ago? Well, you'll see as the review rolls on. The GT-3 is a tank. Solid metal casing (blue)with indestructible switches and LED, and 3 green boards on the inside and tough, top of the line jacks that they don't use anymore. I have used this thing for almost 15 years, gig after gig. Probably close to 2,000 gigs if you include studio stuff. It has been used in almost every state in the union, Mexico and Canada. As a working player, I have used it for country, rock, metal, punk, rap and hip hop, randb, jazz, fusion, jam band, and everything else under the sun.

I purchased this unit when I was working at a now defunct music store in middle Tennessee. Saw it at a Namm show and was impressed. I was getting fed up with the squirrel-y nature of my pedal board at the time and since I was gigging all the time and getting some road work, I needed something that sounded great and was TOUGH. It turned out to be the most consistent and usable piece of gear I have ever purchased in 20 years of professional music making. I am not sure how much I paid for it, but it was 3% above wholesale. I think it was around $200-$250 dollars in the mid-late 90's.

ANALOG DISTORTION!!!! That's what makes this unit a gem. All of today's multi efx floor units use digital circuitry to create their distortion flavors. Today's floor boxes have TONS of amazing bells and whistles, while ignoring the fact that digital distortion is just not what pro players use. Ever heard a pro player in an interview say how much they love their modeled distortion? Me neither.

The distortions on the GT3 are created on a green boards inside the unit that copy the circuits of various Boss stomps. You want a DS-1? The circuit is there. You want a Metal Zone? The circuit is there. Not a modeled replication, but the real thing. And to me, that is worth the price of admission alone. And there is a BUNCH of usable distortions in this box. Everything from touch sensitive light overdrive, to blues crunch, to 70's rawk to metal to shred and everything in between.

Also, the first thing I did when I got the unit was to test the bypass and see if there was any change in tone. I did an a/b test with the guitar into the unit into the amp vs. the guitar into the amp. No change in tone. Just like using a single Boss stomp. No loss of dynamics either. Boss is known for how clean their bypass is on their individual stomps, and they did it with this unit. Can't say the same for many of the multi's I've tried over the years.

The other thing I like about the unit is that while there aren't as many crazy efx as you find in multi's today, there is plenty of usable stuff. The choruses, delays and reverbs are clean, clear and crisp. They use a separate green board inside the unit for the digital stuff. Digital time based efx and analog distortion. The way God intended.

I don't use the 'gimmick' efx such as the slicer and the vowel effect very often. But they are in there and work great. And programming patches is a breeze at this point.

Depending on what gig and rig I'm using, I use the unit on the 'front end', in the amp's efx loop, or the 3 cord system that goes like this: guitar>GT3>distortions>amp>amp loop out>GT3 loop in>time based efx>GT3 loop out>amp loop in.

The only nick on the unit is that the Wah kinda sucks. I put my own wah in front of the unit. The synth tracking is weak, but this problem is prevalent in all boxes that work with analog guitars. A uni-vibe is noticeably absent. But if you use the basics; distortion, chorus, flange, phase, delay, reverb, modulation, whammy, envelope, ring modulation, eq, this box is the best multi that has ever been made.

Almost 15 years and close to 2,000 gigs and not one problem. Not one. A look under the hood reveals a simple design and construction that is part of the GT3's toughness. Nuff said.

There are a ton of these things on Ebay and Craigslist. And they are cheap. And while they don't have all the crazy 'gimmick' efx that today's multi's have, the GT3's efx palate is full of top notch, usable stuff. And since it doesn't suck tone, you can use your own stomp favs with it. I believe that this box is the best multi ever built. I have tried all the Boss multi's, Digitech's GNX, and Vox's tone lab stuff, and the GT3 has the best FEEL and USABILITY of anything I've tried. I know a few pros who have put them in their pedal boards just for the distortions! This pedal is in my opinion, an underrated classic.

If you've ever looked at a multi and said 'I'll never use HALF of that!' and then said 'Jeez, what does all that stuff do to your signal?' then check the GT3. You'll be glad you did.

the diff. sounds i can be able to play .

oh its like new and cont. is to the fullest ...

i think it will really be a nice unit if i can rec. a manual for info on how to use the unit .

Boss GT-3
5
Bought this unit brand new at a local music store. Paid about $500 canadian, which is a very good price.
Reason for buying it: i needed something a bit better than my Boss ME-30, which was kinda cumbersome and limiting.


First, it's -versatile- as hell!!! Anything can be assigned to any control, the effects chain can be modified at will, plus there's a connector for adding some external pedals. You can get any kind of guitar sound possibly imaginable out of this thing - and the sound quality is outstanding. You can also use it with practically anything that has speakers on it, the stereo output can be "shaped" to fit a conventional guitar amp, a typical home stereo system, a mixer or headphones, ... it also has a memory of 140 presets that you can create.


You have to know what you're doing to get the most out of this unit. Also, not many of the factory presets sound really cool, but with a little tweaking.... Its only "big" problem is that you can't use several effects in the same 'block' simultaneously, like for ex. Flanger and Harmonist from the "Modulation" block.


I've been using this console for about a year and a half, and i'm very happy with it. From acoustic or plain, clean sounds, to ripping heavy distortion, to more flashy synth kinds of sounds, this console delivers, and delivers well.

It does basically everything. I'm submitting a review because the other reviewer annoyed me so much by panning it just because it does too much for him to easily understand.

The effects are great overall - it's like having a whole bucketload of boss effects in one pedal. The amp sims are pretty good as well I think. I use it to play live and for direct recording.

The amp sims might not be quite as good as the POD in some instances, but the effect are a billion times better and more comprehensive, and there are 140 user presets (+ 200 unchangeable presets)

They are a little behind by not including any software with the unit to do editing of effects. There are shareware programs available (windows only, unfortunately), and you might be able to use sound diver, but they should join the 21st century on this.

It could be smaller/lighter (but the GT-6 is even bigger, so I guess I should be happy).

Some of the included presets are pretty cheesy (most use too much reverb, IMHO), but isn't that always the way... you've still got 140 of your own to do whatever you want with.

I think you could drive a car over it and it would be OK.

The GT-3 is a great piece of equipment. It does a whole lot for the money, and you should be able to find it even cheaper now that the GT-6 is out.

I have been very happy with it and I have only scratched the surface. There is a great user group at yahoogroups.com and they have developed all kinds of additional documentation and are active in discussing the product and helping people out who are interested in learning more or buying one.

This review was originally published on http://www.musicgearreview.com
Did you find this review helpful?yesno
»
Read the 22 user reviews on the Boss GT-3 »

Boss GT-3 manuals and other files