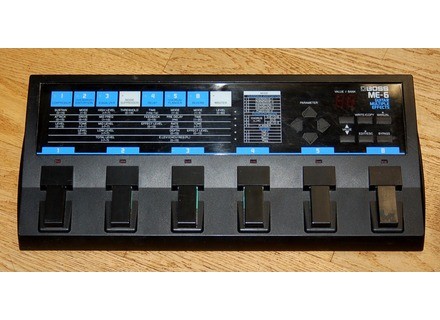 ME-6, Multi-Effects for Electric Guitar from Boss in the ME series.

Boss ME-6
5
i was at my uncle's place playing some acoustic stuff with him and the kid who lives in the next room (learning guitar) brought out his new gadget coz he thought it had something to do with guitar.turns out his father got at at a garage sale coz i thad the word "guitar" on it. he wasnt about to start ripping solos with it so i made a deal with his dad for it, i teach the kid guitar, i get the pedal. bargain!

firstly i liked the fact that it was an effect pedal coz i dnever had one before. but when i got it home and found the sounds it could make i nearly creamed me dacks!
this thing is awesome for an older pedal! the effects are easy to use together and individually (i especially like the reverb sustain and overdrive together for blues stuff) all the effects work a treat, like a bunch of analogue stomp boxes.

when i first got it i couldnt use it coz i didnt have an ac adapter to suit it (boss make the only one that does apparently)i got a mate to fix tat though ... wink, wink

great quality ... my little brother went at with a mallet and it came uot on top, not a scratch. damn well built

Boss ME-6
4
When I first saw this black and blue pretty switch pad, I fell in love. Well actually I just liked it because I was in my, probably second week of playing with my band. It was a pawn shop, I'm telling you right now if you go into a pawn shop you would find something with music. So I went one day and it was for 45 bones, not bad eh!, but something was wrong with it, I didn't try it out at the pawn shop, I bought it. When I got home, i put in my plugs and setted up, and I turned it on, oh yeah I forgot, its not battery operated, it needs its power through a ac adaptor, boss only, (BRA). So i had that, but then I figured out that the input slot was broken. I didn't like that, so I brought it in tho Long and McCaude, and the tech guy fixed it. I was so happy that day, I went home and settep up everything, and once it turned on, I was in Heaven. I played tunes from The Beatles, to Led Zeppelin, to Nirvana and Deftones, I'm telling you can play anything on this. Theres a Compressor, Distortion, Equalizer, Noise Supressor, Delay, Flanger/Chorus, and Reverb on it, so you can make up some hardcore stuff. My band and I bring it to the studio were WE practice, all the time, it get us through alot of songs.

What I like about this unit is that its real easy to use, I have fun everytime I use. Theres times were I just pop in the mic and just put on alot of reverb, with delay, and makes some weird sounds, like a sound you can start before a song, if you're a songwriter? the buttons on it or the pads on it, thier real easy to hit, but sometimes if your drunk like my band and I, you'll probably miss it and still be in a effect sound when you're in the chorus. But that only happens to us.

What I don't like about this unit, is that you have to use an ac adaptor Boss BRA adaptor only. I mean I want to use batteries, I have this story, I thought it used batteries, so I got a screwdriver and I opened the bottom up to see if I can install batteries. It took long to open, becasue it was an old unit, but I got it open. Once it was open I seen that it took no batteries, so I went out to Long and McCuade and bought one of those adaptors, and I was on my way jammin'.

Well I never really constructed with this unit, I leave that to Long and McCaude to fix it for me. The quality is good, I mean when my band and I go to the studio, WE take a car, and its a pretty bummpy ride, and I hear stuff banging in the back. Sometimes WE get so drunk that sometimes it falls becasue were trying to fix the sound and one guy just flings it, I jump when I see it happen, but the little guys there all the time ready to jam with.

I say this unit is really good, if I had more money I would buy one with a wah wah, but this one will always be there becasue you can use it for your voice too.

It's all digital, except the distortions, which are analog, according to the manual.

Very easy to use. Really awesome.

The compressor is very good and, especially, silent. The delay and chorus are very good, just like the reverbs.
The flanger is a bit less precise and watch out for extreme settings, because the sound turns muddled.
The distortions aren't really bad at all.

I've been using it for 17 years

It's awesome for clean sounds, but not so for distortion, although you can always add distortion pedals before it.

In short, a relic, not uninteresting for fans of clean sounds, if not expensive.

It lacks a phaser, though.
Did you find this review helpful?yesno
»

RickD's review (This content has been automatically translated from French)

Boss ME-6
3
It's digital, pedal released in 1994 I think. So not exactly super digital.
There are all kinds of effects.

Probably the easiest to use that I've had multi-effects. See my old and new gear to have a point of comparison, I've had quite ...

I sold this pedal after 1 or 2 years, I think, so around 1995-1996. Suffice to say that my memories are vague. I was replaced by a Digitech RP6 and a GX-700 by Boss. Then I got a Digitech Studio Quad. In short, a long series of toys before putting the budget and move to TC Electronic G-Force, circa 1999, I always today 15 years later.
Briefly, 50 € secondhand I'm not sure that we can ask for more. Is it transparent? Probably not, but when you buy this kind of thing almost as vintage as my aching knees, it is not for transparency.

Distos are pretty rotten as I recall.

I got 1 or 2 years from 1994 I believe. I've never regretted it, as I have never regretted the slew of other multi-effects I had the following years. I was changing every year. Not because I am a dissatisfied but because it was really terrible eternal.
If you are 50 € is not a bad choice: complete, easy to use, I think rather reliable (Made in Japan, I guess, something unthinkable today where everything is made in China and lasts 2 years). If you have 500 € or more opt for TC Electronic (archi intuitive, its really pro). It seems that the Lexicon MPX G2 is also very good, but very annoying to use; however, it would be more transparent for a guitar that TC.
Otherwise, there is also the POD, in the same price, at least there good distos and amp simulations correct, things totally absent from the ME-6.

Did you find this review helpful?yesno
»
Read the 7 user reviews on the Boss ME-6 »