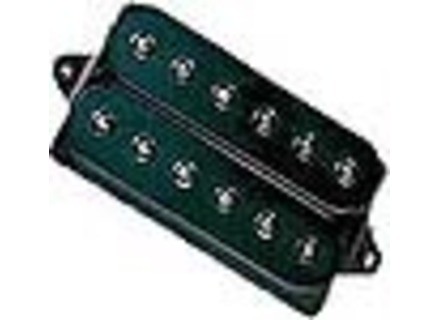 DiMarzio DP160 Norton
4
Dimarzio is one of the most popular after market pickup makers on the scene. Their pickups are more usually found in shred style guitars or super strats. They are used mostly by modern guitar players looking for a modern sound. Steve Vai and Satriani have been using Dimarzios for years and have helped design many models. These guys epitomize the term modern guitar player. The Norton is a mix between the FRED and the Tone Zone. The FRED is the early Satriani pickup design. I am not a huge fan of it. I found that it had a very strange voicing to it but the harmonics where good. This Norton pickup takes the good parts of the FRED and adds them to a Tone Zone. So you get a mix between one weird unusable pickup and one weird useable pickup. It came out in the mid 90s and has all the crazy harmonics of the FRED with the big sound of the Tone Zone. It has 4 conductor wiring with an alnico 5 magnet. The output is about 13k so it is moderately hot. Like just about every Dimarzio humbucker they say its its a PAF with a more modern sound or more tonal range blah blah. The EQ is pretty level with some dialed back treble and slightly boosted mids. The Norton really delivers on its promise it really is like a Tone Zone with all the harmonics of a FRED. The Tone Zone is known for its big sound with its tight low and and crazy mids and this pickup has all of that. With the 13k output this is considered medium output nowadays. Not having super high output gives this pickup more dynamic range than a pickup with insane output. It is very hard to make a super high output pickup that still retains all the dyanmic range you could want. If you are looking for a Tone Zone with more harmonics or a FRED with a better voice this pickup is for you.

DiMarzio DP160 Norton
4
The DiMarzio Norton is a pickup that doesn’t get looked at that much. It’s a modern sounding PAF that’s somewhere between the DiMarzio FRED and the DiMarzio Tone Zone. It features slugs on one coil with screws on the other. It also has four conductor wiring and an Alnico 5 magnet to help bring out that more vintage-esque quality while still keeping everything nice and tight.

The Norton is a peculiar pickup. It tends to work very nicely in the bridge for those looking for a medium to high output humbucker. The low end is big and almost comparable to the Tone Zone. The midrange is grindy and powerful, again similar to the Tone Zone. The harmonics on this thing, however, are very similar to the FRED. It has a very big sound, but it’s not super high output so that it constantly clips your signal. The treble is warm, so it won’t be very piercing in the bridge. Split sounds sound pretty good, and it’s not too bad in parallel, either.

This is a very versatile bridge pickup. It can do anything from Texas blues to 80s metal. It has enough compression to where it works for the higher gain stuff, but it’s also open enough to where it can be used for the lower gain stuff. It’s almost similar to the PAF Pro in terms of versatility, but I find it actually works a little better being a good “all around” kind of pickup.

This pickup will work in pretty much any wood combination out there, but I find it works better with woods like basswood or alder. These woods help work with the pickup’s low end and make it sound a bit more alive than if it were put in, say, mahogany. This pickup has a lot of mids, so a heavy mid wood like mahogany could make it a bit too over the top.

DiMarzio DP160 Norton
4
I tried a couple of pickups for a Les Paul Florentine (half body) with special specifications: less drafts that Gibson pickups, more accurate saturation (especially fat saturation) and capable of providing leads bluesy crunch without fail. Di Marzio guys advised me a couple of Air Classic B and Norton which complement each other perfectly. This is an alternative to paf: less saturated drafts, but logically less warm clear sound or light crunch. I use Norton neck pickup, and although it lacks a bit of softness and roundness in the clear (this is relative), it is much more interesting to play lead in crunch or saturation because it remains accurate and biting. We're just at the boundary between the classical and the modern micro bam. For fans of Robben Ford or Larry Carlton, this mic can be quite interesting. Some criticize his lack of character, the downside being a great flexibility, which allows it to provide in large saturation, where a vintage paf neck throw in the towel without tipping in sound or response "metal". In short, this is what I was looking for this guitar.

Its sound is very nice, and is positioned between the Tone Zone and Fred.

- More gain, dynamics and bass that Fred (305mV), while retaining the latter's singing ct (dcrire hard with words, everything). In short, a grain similar, with more bass, the Norton has more in the vest!

- Almost as winning a Tone Zone (375 mV), the ear is not obvious violent, less bass (all the better because in neck ...), so many dynamics.

Before I clicked the Norton, I had some neck DM microphones on hand.

- The Paf Pro, which has less gain (300mV), and feels. It also bavouille too much compared to Norton. But still warmer than the latter (this explains cel.

- The Air Norton (275 mV). Friendly, but it lacks real potato to hold the shock front of the micro bridge. A bit of a micro dancer what!

I do not even speak the SD neck I had trs quickly (all fawn in Duncan too often turns around two microphones, the SH1 and SH2). Chubby, no gain Touda, plump grain / drooling / imprcis. Nevertheless remains the same SH10N "Full Shred", one of the few Duncan neck really liked me.

Last, I stick to a slecteur Megaswitch Schaller, history of having clear and crunch sounds Zulas in single coil (especially with beginners in the patator bridge!)

In doubles, it sends all of the same lot, one can easily clean channel cruncher (volume knob back and calls for mdiators not trs). Obviously, by adjusting the attack, everything remains clean.

In one simple, b'en ... it has a single coil sound, the grain is similar to grain humbucker, with little hum (almost imperceptible in fact!). The volume is then gnral diminished, which is normal.

Coupled with the single bridge Splitt you end up with a really nice sound, trslgrement "creusquot; almost 2 position of a layer (I said almost).

In short, the microphones, taking advantage of the split, trs is really versatile, and raking in the metal as well as in fantasy sugar, blues, etc.. Identity while having a sound (not like some DM, and Norton Air DropSonic at the top).

That's it, I still found a micro neck engaging me! Huhuhuhuhu!

Did you find this review helpful?yesno
»
Read the 6 user reviews on the DiMarzio DP160 Norton »