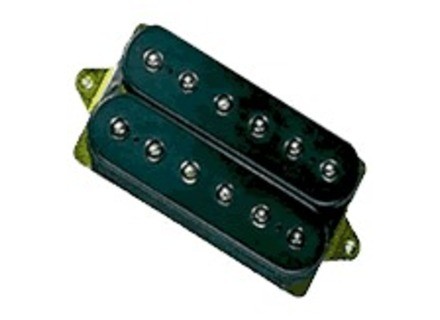 All user reviews for the DiMarzio DP215 Evo 2 Bridge

Average Score:4.5( 4.5/5 based on 8 reviews )
Audience: Advanced users Value For Money : Excellent
Not satisfied with those reviews?
Our members also liked:

DiMarzio DP215 Evo 2 Bridge
4
Look, we aren't Vai. For mere mortals, just get a Breed.Unless you have techs that can adjust the settings on amps and and full band mix , even the Evo2 is a highly advanced pickup, still prone to being bright and thin for most of us, unless you are playing in a full band setting and want a cutting pickup narrow bandwidth like Duncan JB or Full Shred .
Am I right?
Did you find this review helpful?yesno

DiMarzio DP215 Evo 2 Bridge
4
The Evolution is a super hot pickup with lots of harmonics and is very tight. However, it had an issue when you try to calm it down. It seemed like it was always full on with no real way of introducing some dynamics to your playing. If you’re someone who likes to ride the volume knob, you’ll probably not like the original Evo. That’s why DiMarzio (or Steve Vai, I’m not truly sure) decided to make the Evo 2. This is similar to the Evo, but it’s not quite as tight sounding, yet it’s more harmonically pleasing and complex. The pickup has a lot of unique overtones going on with it. It has a lot of midrange, so keep that in mind. If you put this in basswood, it might be a bit too strong in the midrange, but a lot of people like it in Ibanez guitars, so it might be worth a shot. Personally, I find this best suited towards alder or mahogany bodied guitars as it really helps push those complex mids while leaving everything else fairly even. It’s not overly bright like the original Evolution was, but this still has a lot of harmonics that the traditional Evo has. I originally put this in my RG3120 and really liked the results I got. I’ve since taken it out and replaced it with something else simply because I like to change up pickups once in awhile, but this is a very solid pickup. I’ve since moved this to my JEM, and it works amazingly well with the middle single coil for those Hendrix and SRV kind of tones in the bridge position when split with the single coil. My guess is that this would sound great with a push/pull, but I didn’t have any on hand to test it, and I didn’t feel like opening up my guitar again.
Did you find this review helpful?yesno

DiMarzio DP215 Evo 2 Bridge
4
The DiMarzio Evo 2 is the Evo that most people like. This pickup fixed most of the problems that everyone had with the original Evo. Where as the original Evo was extremely tight, bright, hot and hard to tame, the Evo 2 helped reduce some of those qualities while still making harmonics jump out like crazy. It features four conductor wiring, a ceramic magnet and adjustable pole pieces on both coils.

The original Evo was definitely a love or hate pickup. It was very bright, extremely tight and didn’t clean up when you lowered the volume knob. The Evo 2 tamed some of that brightness, increased the complexity of it, added more touch sensitivity and made it a bigger sounding pickup while still having those awesome harmonics that the original Evo had.

The midrange in this is boosted a good bit, so keep that in mind. It can make a guitar sound somewhat narrow, but it should mate with most woods. I’d probably recommend against using it in mahogany, but it depends on what your particular mahogany sounds like. The treble and bass are fairly even on this, so it delivers tone in spades. The split coil sounds are great, and the parallel tones are real cool as well.

If you didn’t like the original Evo pickup, I highly recommend trying this one out. It still has the similar characteristics of the original Evo, but it is a bit more tame and easier to handle. It’s not as extreme, so I find it works in more applications. I’d really like to hear this pickup with an Alnico 5 magnet, though. I think that would really make this thing come alive even more. I thought about doing a magnet swap in mine, but I’m too lazy to go through the process.
Did you find this review helpful?yesno

McREMY's review (This content has been automatically translated from French)" Super Micro!!"

DiMarzio DP215 Evo 2 Bridge
5
I mittal a X2N in my RG550 by year EVO2. Perfect fit for me! I like it, not the Steve Vai tone purpose I found my tone. I can not stand not playing with it!
Liked about it: Versatile, punchy, fits well with several different neck pups.
Clean tone is very cool too, I aim Mainly used the middle and / or pups in the neck clean tone.
Did not like: Cleans are DEPENDING on your ears a bit sparkling ...

As many potatoes as a tone box with a little more of fry in the mids treble without making a large frying dégeu in the treble.
As for saturated rock / metal / prog well defined, very clean, good. Alone you leave the harmonics with ease, it is excellent.
In his clear, I do not really know yet, I think it's rather plain. But at the same time I use rarely bridge pickup for clean sounds, it's not my thing.

Coupled with a PAF Pro, AC has not done at all, gain level is ok, but in middle position I found myself with a sound box with little harmonics. Not handsome, like "clang!" (And not "twang" alas ...)
Coupled with an air zone, gain level is ok, and intermediate position much more interesting, a good attack and sustain full of beautiful harmonics ...

pnico's review (This content has been automatically translated from French)

DiMarzio DP215 Evo 2 Bridge
5
I have this mic for about a year, the particular feature I like most about the possibility of his tendudu the sound, I had emg, tone zone, more than on my ibanez inf miro, report quality exclnt price (about 100euro)
I like the sound steve vai tro so it's the obligatory I thus has a rg 350 dx with the evo2 and breed. it gives the variation in just the volume knob on the guitar are thoroughly allucinante it's an evolution to the 8 to end up with a sound close to his area and tone the more APRS descent over the volume we're going to the big crunch saturax see if we clean a large volume jou! (Tender Surender steve vai is the perfect dmo of what I said) and all without losing volume or tro precision of acute! this microphone is magical!
Did you find this review helpful?yesno

Scott Bis's review (This content has been automatically translated from French)

DiMarzio DP215 Evo 2 Bridge
4
I wanted to try this micro ceramic Dimarzio bridge position and it's done.
It is a microphone that has excellent projection, an important output level comparable to the Steve's Special.
The back and forth solo is powerful, the harmonics just waiting to come out, the dynamics are excellent, where the Tonezone is a bit "cloudy", it shines the Evo2 shamelessly.
I found it rather high mids but without excessive treble, clean it does not bleed, her mediums are more focused "rock" than "metal".
Dailleurs I have not found it very suitable for metal, unless you have an amp that lacks shine and is loaded with bass.
In clear, crunch, I found it excellent.
For what I want, it lacks a bit of bass and mids are slightly too high, the ideal for me would be a micro Tonezone between Evo2 and for his dynamic presence.
[edit on 26/09/08]
I put together some time ago with the Paf Pro in neck and charm the first time has not operated with the Air Norton in neck it must be able to do.
Did you find this review helpful?yesno

Izard6's review (This content has been automatically translated from French)

DiMarzio DP215 Evo 2 Bridge
5
I've had two months. Initially I was looking for a microphone that filled the gaps in Evolution (sounds a bit garish) but kept his main qualities, fish and grain. So I naturally turned to the Evo2. Well I was not disappointed. Certainly it was less aggressive hair that evaluation and the grain is a little different but it is subject to possible sound without any problems. First the spectrum is more balanced between medium and severe fever. A high level is better defined and more precise. Finally split or playing the volume knob it gives a range of sounds far more interesting is the evolution or a moth. Harmonic level is a draw.

Finally a microphone that has fishing but is not as exclusive as its big brother.
It offers more features and better sound spectrum. The evolution do ahead of the game for hyper saturax.
I have 3 other different DiMarzio pickups on my guitars (air-norton, Evolution, tone-zone) and although I find them all good now I have a small preference for the Evo2.
For the price, bought 85 euros across the Rhine, can not fault the price is final and we do not regret it.
Reference now my microphone.
Did you find this review helpful?yesno
Cookies help us improve performance, enhance user experience and deliver our services. By using our services, you agree to our use of cookies. Find out more.