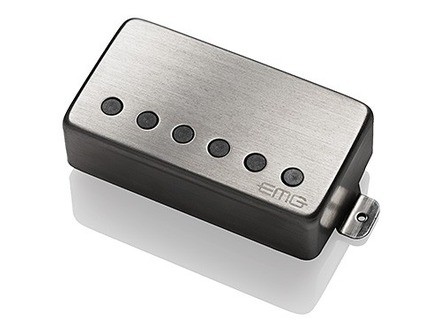 57, Humbucker guitar pickup from EMG in the Active series.

EMG 57
5
With a Gibson Les Paul standard equipped with microphones Burstbuckers Pro and especially enjoying particularly Zakk Wylde and especially its sound palette, I started looking for a set of EMG 81/85. The result was up to my expectations with distortion, but a crunch hello havoc! However, it is possible to obtain drinking crunch sounds, but not to my taste anyway .. At least not with the 81 because the 85's pretty good!
But back on topic, sorry, our microphones, and finally the microphone:
So to level 81, so I decided to turn towards the 57 and there problem!
micro unavailable in France or almost .. Thomann has received dropper and its counterpart (66 I will detail in its own test) is also not available in the catalog!
I decided to give it a shot at Music Challenge Nancy, who told me that I can import the precious pair. About 20 days later I finally receives (although they very quickly, thank you to them).
Neither one nor two, here they are installed in less than 1 hour on my Les Paul through the solderless system.
And then the slap! To me the crunch and super clear sound!


Let the sounds, all summary points:

- Clean sounds worthy of a liability, and a good eh!
- Warm
- Loaded low (for a pickup, it is quite surprising to see how)
- High output providing access to modern metal sounds or very "old school"
- Sensitive to changes in volume and tone
- Access to vintage sounds and this may in all styles

To summarize, active micro-alnico V, steel studs.
I put my guitar in the hands of a person accustomed to Paf pickups Gibson without indicating that it was EMG and believed to play liabilities of the brand .. Finally, until he opened the volume! Because there is no longer the same; severe it sends.
However, as mentioned above, the clean sounds are to die for, and even the volume open to bottom we do not end up with unwanted like the famous 81 crunches.
So here is an extremely versatile microphone, with which I take great pleasure in playing can sound warm blues, pop, rock, hard rock to Slash (I never felt so close to his signature sound) and the metal Pantera Machine Head and more ..
If you hate EMG because you find them cold, try those because they have nothing to do with traditional EMG, a supercharged micro bam I tell you!
I will not put 10/10 because I want to try to be as objective as possible, but close to perfection, often do not spell EMG pickups (in fact it's been a while that there was no real new ) and they are not kidding, successful bet!