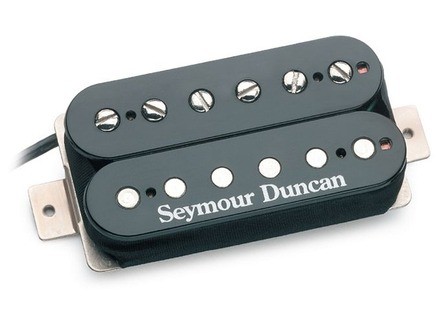 Seymour Duncan SH-1B '59 Model Bridge
4
This has been my go-to pickup for when I don't really have a particular sound I'm going for, for probably a decade now. What makes it so great? Really? Nothing. It's really not that great. It does no one thing exceptionally well except it does everything reasonably well. The clean tone is decent, the mid gain tone is pretty good and it even does higher gain stuff fairly well. When looking at a humbucker, that's kind of hard to find.

One of the other benefits of this pickup is that it is not at all hard to find. You can probably go into any guitar shop in America and they will probably have one of these in stock. The price is also reasonable. That is a huge plus over the internet shops and custom makers sometimes outrageous delivery times.

What this pickup does not have is character. It's very vanilla and plain sounding. That's not necessarily a bad thing. If you want the sound if your Les Paul or other humbucker equipped guitar to come through, this is a pretty cheap and easy way to get there. If you're looking for a signature sound, try any number of the higher end pickup makers. There is a bunch of really great stuff out there.

But just because it sounds vanilla and plain doesn't mean it sounds bad. It sounds pretty dang good and depending on the guitar and amp, it can sound pretty great. There just are not any offensive frequencies to be found. It's somewhat mid rangy and not very high output, but if you're looking at PAF style humbuckers you probably already realize that. As with all pickups, you should experiment with pickup height to find what sounds best.

I have tried other pickups from companies like WCR, Voodoo, etc and even higher end Seymour Duncans. As amazing as a lot of them are, this pickup can hold its own against them. In fact, it just might beat some of them. Not too bad for a pickup in this price rage.

barvador's review (This content has been automatically translated from French)

Seymour Duncan SH-1B '59 Model Bridge
5
Mine is an old one, made around 1990 to US stamped 59B for SH1 Bridge. It does not cover, it is not splittable (no impact on its known) and is zebra.
in the bridge position, it offers a more aggressive than race on a Les Paul Standard or similar (with maple table). The grain is much like the salt that gos ds we do cruncher crunches. It's the sound Blues / classic rock, Led Zep, Bluesbrakers, Mick Taylor, Peter Green, Clapton "episode 1" etc ... In a clear sound is not too intrt, but in crunch or ovrdrive is very nice, very classic, like disks, happiness!
It is warm, not too Dfine but with a clarity trs vintage, without being too clean either. it is the spirit of the 50s, as in an old garage US, there are beautiful bodies and round chrome very clean, but it's even a little rebellious in spirit .. That's enough balance. Who would like a more consistent or more of the body will be as it will miss a bit of mediums. An alnico 2 (gibson classic 57) a. correct
Report quality great price because it is one of the cheapest in SD.
Did you find this review helpful?yesno
»

Seymour Duncan SH-1B '59 Model Bridge
5
Jai rcemment bought an Epiphone DOT (for Cheap + fantasy of playing a box) but the original post are two small microphones that merdouilles jai quickly replaced by Seymour SH1.
Here, the SH1-B (bridge, so bridge position):
LA in the first big round head through an overdrive enough to convince the rocker quil should not look any further to reach its IDAL.
Cest vintage, biting, fat, rich, gnreux, feed, jai a brief sensation dquilibre stable between charm and potato EST IDAL and for rock as blues . Here I am London transport in 1968 in the colors of Led Zep, Ten Years After, the Stones and I flat floor and a big round head, just to travel a few riffs dear Malcolm Young: it s believe it!
Such a grain invited us along on a piece of solo blues scale. The grain remains pais, couillu, the low round held without drooling, the mdiums have their place, but discrete Submitted and treble are perfectly balance to the note that spring up without being garish.
Conclusion:
IDAL microphone for vintage rock and seems to be lese in all styles. Thats a copy of the Gibson PAF 1959 and with a, you could do everything and you can still do everything.
A microphone that has a lot of class I prfre to Gibson as a little over 57 prcis and a little more bite.

Seymour Duncan SH-1B '59 Model Bridge
5
I've had it three months, mounted on a sg basswood (set neck) with tremolo Rockinger.
Important note: as tunomatic is very close to the microphone Acute sg-lp I sh1 mounted upside down with the pads next round (and many more out like that means much this coil) to prevent duck nasal usual effect.
In SD I have only to compare jeff beck, and it is not the same thing. The sh1 is much more natural and softer, more balanced too.
The output volume is not a concern, but can the splitter in acute it is useless to me, and it generates a little noise anyway (like his colleague handle on sg-lp-lag roxane) that n is not too annoying though.
The detail is great, not clinical, everything is going solo (good sustain) and well balanced rhythm is not dropped just a little slower to the trigger that gender specialists. The sh1 offers a great warmth, this explains it ...
Used clean-fingers in tandem with the micro serious split (here an Ibanez SZ, the absolute beast) is a pure delight, the balance is perfect and everything goes smoothly with joint overall.
It's something to be frightened by the market offer, and what amuses me is that the old classic of the house well enough in fact!
Short, a good surprise in seymour!