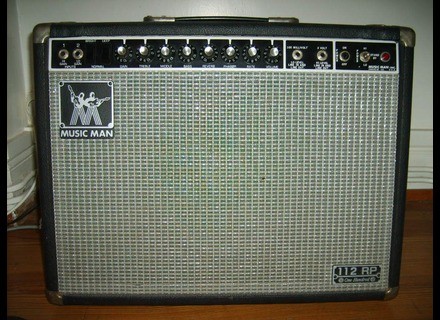 Fred The Shred's review (This content has been automatically translated from French)" A must for clean sounds!"

Music Man 112-RP One Hundred
So mine is a 112 RP ONE HUNDRED 1979 according to the serial number.
I will not repeat the features already provided in the previous opinion, but yeah the transistor preamp and power Lampes.Et yeah it is manufactured by Leo Fender after he left home Fender / CBS.
Attention, there is only one channel, the footswitch is used to enable / disable the onboard phaser and reverb.
It is 100W and it sends severe, it can decrease the output by selecting High or Low on the standby switch. Well, the difference between the two is not huge, but we feel it anyway ...
Both high and low inputs let you adjust the type of guitar (single or double coil) to gain input of the amp.

For the settings it's plug and play, bass, middle, treble, reverb, good takes a little fiddling the Deep switches (boost the bass) and Bright (treble boost) depending on the guitar used to find the sound, but no more.
The manual is very helpful to understand all the possibilities offered by this amp via its reduced connectivity but very well thought out!

The Son is superb, with incredible attack and great dynamics. This is in my opinion a less typical 60's "twin reverb" and sounds in the Police, The Cure, etc. ...
Especially with the phaser engaged, that sounds incredibly, never heard that with a pedal!
With a good strat is the foot, 5-position switch is rediscovered (positions out of phase are a treat, Mark Knofler fate of the body!) Is in my opinion one of the great qualities of this amp The sound of the guitar is used and respected retains its identity.
In another style, I listened to a Gibson ES175 in and it sounded really good, so good for jazz also because we can get a good Forested / mellow sound with a humbucker in the neck position for example
As against this, forget the saturated gain in the amount to 8 or 10, the sound becomes dirty very quickly, it can be interesting, but we see immediately that this is not done.
A good point for the master volume that allows you to play in an apartment with potato necessarily less at low volume, but always with a good definition and vintage grain.

I have 4 years, but it has been down for 2 years, I had shown various technical specialists tube amps, but the party seemed transistor ask worries and difficult to repair. Well finally someone gave me competent to manufacturer specifications and is like new! no buzz nothing! nickel!
Well, everyone who saw pass (technicians, vendors music stores) remember it as a great amplifier and often regret having sold.
Me priori I keep mine in spite of its weight (relative to its incredible size, whether the frame is cast ...), which can be a handicap in the long run if you have to lug in repeated regularly.

johnjohnhans's review (This content has been automatically translated from French)

Music Man 112-RP One Hundred
5
It is a hybrid amp, Pramper transistor amplifiers lamps, 2xEL34.
It sends 100 Watts into 8 Ohms on a hp ElectroVoice. You can use a baffle extension, 8 ohms, and it has a switch that is placed on 4 ohm connected in PARALLEL.
1 channel, but 2 among the choices, high or low gain. A gain, treble equalizer Bass + 2 boosts medium rather deep and bright, spring reverb, phaser-board with 2 knobs, Phasor and spleen. 1 volume, 1 switch for standby and on / off switch.
On the facade 2 inputs / outputs such TRS insert effect.
Pedal for the reverb and phaser.

Conventional configuration.
The clean sound is very beautiful, very bright, with attack and clarity. When the gain Exceeds the 7 / 8, a crunch asez spcial pageantry. At 10, a saturates strong enough, it's a matter of deep got.Le provides very deep bass, the bright can be garish. When using these buffs, it must compensate the qual, but hey, there is the potential to seek sounds. Designed for an amp it sounds clear, I think gave a good basic sound pedals for overdrive and saturation if you want to sound more hairy.
I do not have the manual but is found on the Net, and we learn everything that can seem bizarre, such as 2-channel insert.

I play blues rock, it makes me sound very clear that I crunch to 8. TS9 overdrive with a style, it was the lead sound for blues solos, with a tlcaster, was going well.
That's the kind of amp or can not put everything back on the other hand.
Gain 10 + with the deep bass boost 10, in addition, it is anything.
This is an amp for his clear, country-oriented, and may be especially reggae, and phaser rverb are ideal for those clacking sounds and colors.

I bought 3,000 francs in 1993, used. It must date from the year 79. I had a problem with and I have long wondered who I could PARu. APRS be pass between a lot of hands, which are finally working. I understand that a long time wanted and not EL 34 6L6, although most of what I read gave 6L6. I later saw that some models worked with EL34. I use a trio with bass and drums. I have the sound I want, just the base and j'overdrive with the TS9 and a fuzz face.
While he no longer worked, I played on a Marshall Valvestate 150, which has no personality.
Now it works well, I care! This is an amp with the character who deserves