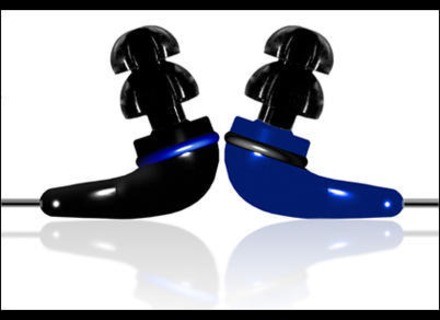 Future Sonics Atrio Series
4
The M5 Future Sonics are an in ear monitoring set of headphones; they come with a carrying case 2 pair of foam sleeves LG, 2 pair of SM foam sleeves, and a cleaning tool so you can keep your ear pieces clean at all times which is very important. Our drummer has been using these headphones since 2009, he has went through about 4 pair of them since then though because he kept having issues with them shorting out (jus the first 2 pair). Since then he has not had an issue with them at all. As a drummer you need to have a great pair of in ear monitors that will give you some nice low frequencies. That is very important and is why I recommend the M5 Future Sonics to drummers and bass players.
M5 Future Sonics have a frequency range of 18 Hz to 20 kHz with an impedance of 32 ohms and a noise attenuation of 26dB. They come in a few different colors but he just has the black pair with blue lining on them.
As I stated the low end on the M5 Future Sonics are amazing, it is punchy deep and rich. The mids are clean and highs are very crisp and bright. But to me the highs can get a little to bright when turned up to a higher volume which really makes my ears hurt which is why I could not use these and recommended them to my drummer and bass player.
Also they do not keep out external noise very well so that is something that you will have to take into consideration as well. These headphones also did not sit in my ear very good either. I was experiencing many problems with these not sitting the way that I would want them to sit when I was on stage because I was moving around a lot. That is another reason why I recommend them to drummers because they are stationary.