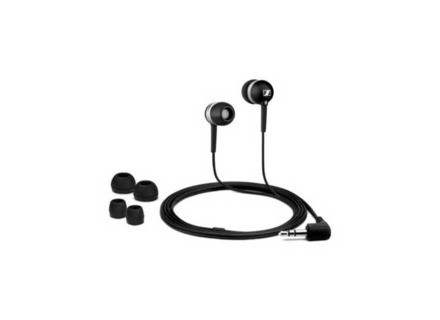 CX 300, In-ear or ear-Pad monitor from Sennheiser in the CX series.

Sennheiser CX 300
5
(Originally written by Patrick truelle/translated from Audiofanzine FR)
I bought these headphone about two weeks ago and they are pretty good.

Very good sound with incredible bass reproduction considering their size!!! Don't use cheap MP3 players with EQ presets like my old MP3 player because the low frequency range is overemphasized with virtually every EQ preset. But the headphones are very good for MP3 players with a real EQ.

I only miss some sort of system to coil the cable because it gets tangled pretty fast inside your pocket.
Did you find this review helpful?yesno
»

Sennheiser CX 300
5
I bought a week ago following the failure of my old earphones Sony MDR-EX71. Purchased at € 49.90 Boulanger. It provides very good sound quality with bass as powerful and accurate sound rather crystalline but not garish. This headset does not belie its functionality noise outside, it isolates us very noisy (Mind the traffic when you walk or ride your bike in the street anyway). Small flat, the headphones do not have separation jack / jack 3,5 mm with a spigot on one side and female on the other, not very handy when listening to music from a Sony Ericsson phone with connecting headphones are not in standard 3.5 mm. So with this phone you end up with a cable network spanning almost 2m! But hey it's mostly the fault of Sony Ericsson.
So in conclusion despite the price I found a little high for my budget at the start, this little wonder has convinced me so much by the power of his bass by its sound quality is very respectable for its price which is finally attractive! ( ../../../sony/MDR-EX71/membres/a.deleteProduct,u.281367.html?token=9ad4a5d8974ce84e4c339936073c1b2b ) ( ../../../sony/MDR-EX71/ )
Did you find this review helpful?yesno
»

Ethernal's review (This content has been automatically translated from French)

In little earphones, some AKG / Sony / Sennheiser unpleasant but not too expensive for minimal gain quality and for my small budget.

+ Very good insulation, not too bad spectrum returned unless ...- as usual with most Sennheiser, TOO low. Yet I love all the bass (I listen to mostly electronic music), but that it encroaches a bit on the medium-serious injury because the highs are well defined.
</strong>
</span></span> <span style="font-family: Arial, sans-serif;">

</span> <li style="margin-top: 0px; margin-right: 0px; margin-bottom: 0px; margin-left: 20px; width: 359px; float: left; padding: 0px;"> <span style="font-weight: normal;"><span style="font-family: Arial, sans-serif;">Why not, I would try to see what is being done in other brands and try other models if I get the chance. I am a little tired of his "subwoofer Sennheiser, after 5 years of brand loyalty and always this same small criticism - it's very personal, some people love this kind of his whole life - so I hesitate now.</span></span> <span style="font-family: Arial, sans-serif;">

</span>
Did you find this review helpful?yesno
»

Other Sennheiser in-ear and ear-pads monitors